Yesterday, we spoke with two interesting men who have worked with Madame Eve through the years to help her establish the perfect setting for ideal one night stands. Today, their significant others have dropped by to give us a different take on their interaction with 1NS.
Welcome gentlemen. Let’s start with why you registered with 1NS? What did you hope to find?
GARRET. I have a good friend, John Godfrey, who met his partner Travis Hunter thru Madame Eve and her service. (Bear It All, by Deanna Wadsworth) Well, they are an unlikely pairing, but I have never seen my friend happier. Then I found out John’s sister Grace and her new husband met via Madame Eve. (The One He Chose by Wendy Burke) I’ve never had a problem finding a date, but real connections like my friends found are hard to come by. Needless to say, I was intrigued, so I signed up for one of these fantasy encounters.
DANIEL. Fancy is right, Garret. Despite the chunk of my savings it cost me, I never could have anticipated what Eve had in store for me. I had left an abusive relationship, and my ex continued to harass me whenever he could. I couldn’t see a way to escape his influence and decided I needed to do something drastic to change things up. I wasn’t expecting anyone like Jagger. I was just hoping to find a way to see myself differently. 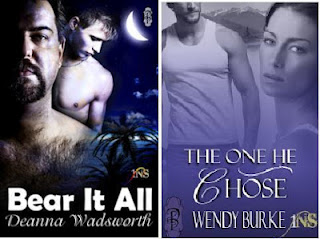 You both sound like you had valid reasons for contacting an online service. But, would you do it again? Let’s start with you, Daniel.
DANIEL. I’d do it again in a heartbeat. I was scared shitless when I first saw my date. Jagger’s gorgeous and naturally arrogant. I feared being with someone with a dominant personality again, but beneath his strength lies the soul of a protector. Jag proves every day that I can be myself in his arms. If I stumble, he’s there to kiss it all better, or at least distract me from the pain. I suppose that sounds silly for a guy my size to look for someone to take care of him, but Madame Eve must have known me better than I knew myself.
Sounds like her forte, and I think all of us want to be taken care of now and again, Daniel—no shame in that. How about you, Garret? Would you do it again?
GARRET. Well, only if she sent Martin Baird to me again (laughing). But yes, calling 1Night Stand was one of the best decisions I have ever made. Marty is the perfect man for me, and just about the most adorable guy you’d ever wanna meet. My brothers, being the meathead jocks they are, were skeptical when they met him at first. We run a sport’s bar in Detroit called The Fourth Base, but my Marty doesn’t know a thing about sports. And he’s a bit uptight, but I love that about him. My family thought it was a bit crazy that Marty applied for an American Visa and began moving in with me a week after we met. But when I see what I want, I go for it and I don’t let it pass me by. Now that my brothers have seen us together, they know we were made for each other. It’s hard to explain, but Marty and I fell easily into our roles together and were totally in sync before our date even began. Now it’s like we can anticipate the other’s needs without saying a word, rather, just by sharing a look. I’ve always been the kinda guy that liked taking care of those around me. Nothing makes me happier that taking care of Marty, making sure he is happy and safe and has everything he needs.
Apparently, you both found more than you were looking for. What advice would you give to singles thinking about using 1Night Stand’s services?
DANIEL. Take the time to fill out the application with as many details as you can. Some of the questions might seem crazy or too private, but the more information you can give Eve to work from, the better chance she has of finding the perfect match. Though I have met people who swear they gave one word responses and she still got it right, so I guess she reads into the answers to some extent.
GARRET. I would be one of those people, Daniel. I even tried to trick Madame Eve by leaving off that the one thing missing in my life was a man with a submissive nature who wanted me to be in charge and not just in the bedroom. I like taking care of a man, but I left that off on my application. But damn, she knew anyway. It was like Marty had been custom ordered just for me. So my advice would be to just contact her. And don’t wait. She knows what we want even before we do. Marty says that he thinks she must have used a bit of fae magic, and judging by how happy we are, I wouldn’t be surprised if she did.
So gentlemen, besides the obvious of finding your significant others, anything else you gained from your experiences with 1NS?
DANIEL. Yeah, family. Jagger and his family have accepted me as one of them. I hadn’t had that type of unbiased love in a while. This past year has opened my eyes to a great many things. Jag and I do humanitarian missions all over the world, but especially in desperately poor areas. This led us to our daughters in Haiti. I can’t wait to be their father for real, but even if the adoption should fall through for some reason, we have told the girls that we aren’t going anywhere. Last time we were there, our youngest curled up on my lap and took her afternoon nap. Her older sister, Mimi, tried to lay her down, but I wouldn’t let her. When Tchina woke up, she stood on my lap, kissed my head, and said, “Love, Pa See,” (Big guy tearing up) She tries to call me Papa D, but her tongue won’t twist around it. I thought my heart would explode. Madame Eve has given me far more than I could have ever imagined, and I will never be able to thank her for my partner and the love he has brought into my life. 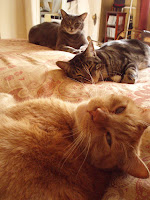 GARRET. That’s beautiful, Daniel, I only gained a third cat. (laughing) Honestly my life was good before I called 1Night Stand. I have a great family, friends and a bar that I love. But the one thing I needed was the other half of my soul, a man who needed me as much as I needed him.
Some use the word Dom to describe me, but whatever, I'm not really a fan of labels. I am a man that knows what he wants. But I also knew that I hadn’t found it and I was beginning to wonder if he was out there at all. It pains me to admit that Madame Eve did a better job of finding him than I ever could. Marty is the brightest part of my day. When he travels, I still get excited when I see that he texted me. Nothing is worth more to me than that.
DANIEL. Sounds perfect to me, Garret, and Marty tells me he feels the same way. He’s a good guy. I’m glad you found each other.
at 3:01 AM

Thanks so much for sharing a blog with me LC Dean!!! This was fun

I was happy to hang with you, Deanna. I enjoyed reading Martin and Garret's story.

If you could have SEEN Martin & Garret at the bar---it was SO obvious they were destined for one another!

Seriously, I can't thank my late husband enough for contacting 1NS for me--he knew what I wanted and needed--although I was too afraid to make the move on my own.

My brother John couldn't be happier with his 'date,' now my family as well, Travis.

And, Martin--what a sweetheart! He took care of me and watched out for everything when I stayed in Banff!

Looking forward to seeing him and Garret in Detroit soon!

Yay! Grace from The One He Chose! We haven't heard from you in awhile! Thanks for stopping by!