The Perks of Working With Madame Eve


Today we have two of Castillo Resorts employees, hotel manager Jagger Castillo and head concierge Martin Baird. They are going to give us a little insight on what it’s like taking care of a special customer: Madame Eve. For those of you who do not know, Madame Eve runs 1Night Stand, a service where people can engage in a fantasy one night stand encounter. She has chosen to use the Castillo Resorts and their fabulous hotels around the world as the settings for her special clients.

Now Jagger, as hotel manager of the Turks and Caicos Castillo Resort, tell us what you do for Madame Eve and her clients?
JAGGER: Pretty much anything Eve wants. (chuckle) She’s a mystery and a hard one to say no to. Somehow she convinces me to set up situations that I would never consider without her. If she weren’t so damned successful, I might hesitate to fulfill her wilder requests, but my partner and I are proof that she knows what she’s doing.
And Martin, what do you do for these clients?
MARTIN: I am a head concierge for the hotel, and since Madame Eve’s 1Night Stand service specializes in fantasy encounters, I do the actual labor of setting up the exotic rooms, romantic cottages, and gourmet dinners for her clients per her detailed instructions. I assisted Jagger in Grand Turk for a month with some of these clients, but I have worked at other Castillo Resorts as well.
You both sound like you have exciting jobs. Seeing all these happy 1Night Stand couples, how did you feel about your own romantic lives?
MARTIN: Well, I always suspected Madame Eve knew a little more than she should about things. Never once have I seen a disappointed couple. It’s like they were all soul mates and Madame Eve was some sort of supernatural matchmaker. Ridiculous, right? But I would be lying if I didn’t admit I thought they were lucky bastards. Wouldn’t you agree, Jagger?
JAGGER: Yeah. At least I do now. Before Daniel came along, I sort of scoffed at how satisfied everyone seemed with 1Night Stand. Heck Eve even set up my brother and his wife, but I still didn’t really believe ( To Feel Again by Valerie Mann). Madame Eve arranged my date as a thank you gift when Daniel’s request came in. Apparently, she realized that we were perfect for each other. Not sure how she knew what I wanted when I rarely admitted it, even to myself, but she did. (L.C. Dean told our story in  Mountain Claiming )
The reason we have you two together today, is that Madame Eve secretly slipped a little romance into your lives. Tell us about it.
JAGGER: She caught me off guard so I fought the date in the beginning, but I’m very glad I gave in. Once I saw the handsome mountain of a man she sent my way there was no turning back. Daniel was a gift that I will never cease to appreciate.
MARTIN: I should admit she definitely blindsided me, too. One of the loveliest accidents if I do say so myself. Even Jagger was in on it.
JAGGER: Helping to set Martin up was a blast. He worries so much about his job that it felt good to see him find someone to break down his barriers and encourage him to let go a bit.
MARTIN: (blushes)Yes, well, as I said, I was working at the Turks and Caicos resort, and decided to add a holiday on the end of my stay. Jagger asked me to sample some new menu ideas, have a few drinks. So I went to the cabana and ordered. I had no idea the drink I ordered would change my life. I met a handsome American man, we shared that drink then he told me we were going on a date that night. I just agreed. (laughing nervously) I had to be insane, right? I didn’t even know him. I certainly didn’t hire Madame Eve to send me a date either.
So you went with this stranger even though you didn’t know him?
MARTIN: If you saw Garret, you would understand. He’s sexy, gorgeous, and confident.  A man you don’t say ‘no’ to. And strangely, I just trusted him, completely. It sounds daft, right? But I went and well.... Let me just tell you, it was the best night of my life. Madame Eve doesn’t make mistakes.
Jagger, what are you and Daniel up to now?
JAGGER: Daniel is the event coordinator at the resort, so we work closely together. I swear he’s almost as magical as Eve some days. He encourages people to try things they would never consider with just his smile. (blushing) Okay, I might be a little biased.
Currently, we are in the final stages of adopting three girls who lost their entire family during the earthquake in Haiti. Mimi is eight, Smala almost six, and Tchina three. We started the process a few months after we became an official couple. We don’t know how soon we’ll get the girls. It could be a while yet, but we are hopeful that they’ll be with us this year. An instant family sounds scary some days, but I’ll do whatever it takes to ensure our girls are never afraid or hungry again. We have flown to Haiti to spend time with them twice now and can’t wait to do it again in a few weeks. The older girls labeled us Papa D and Papa J. Tchina struggles with speech at this point so she calls us Pa See and Pa Say, which is fairly apt. My Dan is a man of few words but he misses nothing. 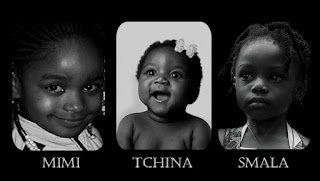 Martin, where has life taken you and Garret?
MARTIN: Well, I’m not doing anything as exciting as Jagger and Daniel, but I did move to the states to live with Garret. We live in Detroit with our three cats. I think for now they are all the children we can take (laughs). They sort of rule the roost in our home.
I still work for Castillo Resorts, traveling to help with Madame Eve’s clients and other important guests. I feel like I have the best of both worlds. I get to travel the world and help other couples find love like I did, via Madame Eve, and I get to spend all my spare time with Garret. Sometimes I work a bit in the sport’s bar he runs with his brothers, The Fourth Base. We have a good time and I’m even learning the rules for American football. It’s rather fun, actually.
Like me, Garret loves to travel and we just got back from a trip to my homeland, Scotland. We visited my family and all my old stomping grounds. You can catch up with us on that trip in another 1Night Stand story by Wendy Burke,  Haste Ye Back.
JAGGER. Let me say before we go that I hope to see some of you at the resort in the near future. It’s always a good day to lie in the sun, and I can guarantee you’ll have a blast, especially if you put your trust in Madame Eve.
at 3:01 AM

Thanks for the shout out LC! I can't believe I forgot to add my own name to our joint blog!!!!! What a moron I am!!!!!! LOL
Thanks for adding my link to Accidentally Beautiful for me!

Love Mountain Claiming, L.C. and it is great that you have continued Daniel and Jagger's story here - very sweet.

Accidentally Beautiful is a hot read too, Deanna. Martin made me smile again and again and Garret is yummy.

I enjoy all the ! Night Stands that Madame Eve arranges.This blurb hascaughtmy attention and I purchasedand moved closer tothetop since they are usually quick reads.

Thanks for stopping by, Suzanne. Glad you enjoy the series. It is a fun one and I can't say I have ever been disappointed in any of them.