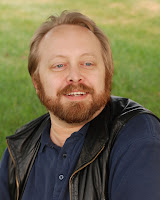 Robert, you have three stories released and are currently working on the sequel to The Strange Fate of Capricious Jones. Can you tell us about the Iron Angel series and what’s in store?
Ooh, there’s a question where the answer could go on, and on, and on. In the near future, romance for Sebastian and Leigh, the on-screen introduction of the Undying 54th, and a fifty ton Steam Punk mecha giving romantic advice to a young woman with multiple doctorates.
In the long run, of course, the Triple Entente has a war to fight. They’ll need to make more like Capricious. That means looking for volunteers, finding pilots who can tolerate the volunteers and vice versa, then getting them into the field, because Capricious and Leigh are going to be getting a workout. Of course, David Abrams Just Won’t Die, and with friends like him, you don’t need enemies. The Central Powers won’t take things lying down, either. Secrets from the past, flying Barons from Richthofen, Baronesses who are also Mad Scientists, betrayals, heroism, more romance, and World War One Flying Aces from Tuskegee.
Because Agatha and Penelope don’t know when to STOP throwing things in the blender, and the only setting appears to be puree.

Has someone helped or mentored you in your writing career?
I haven’t had a mentor per se, but I’ve had a LOT of help. Ann Freeh, a fellow writer and one of the best beta readers I know, has given me in-depth critiques on everything I’ve ever written. Dana Marie Bell has worked with me to get me through tough spots in characterization, plotting, and just about every angle of a story at some point. Finally, PJ Schnyder has pushed me, pulled me, and prodded me through to keep me moving in the right direction. Usually when I’m bound and determined to head in the wrong one. Namaste, PJ.
With your busy schedule, when do you find time to write?
Oh, that’s pretty easy. When I ought to be sleeping. 2 AM is a lovely time for writing. Sanity loss from sleep deprivation? Yeah, I has a crazy. Could you tell?
How would you describe your writing style?
Y’know, when I read the question, my first interpretation was ‘describe your creative process’, to which I answered ‘I’m a storyteller’. I write however the story dictates. Sometimes that means I’m wordy, sometimes I’m concise. Usually the former. I try to mix some action, some romance, some plot, and plenty of characters. Add in some oddness to spice things up, and hit ‘puree’. Of course, my muses throw more oddness in every time I blink. So it gets a touch odd at times.
Thing is, you asked about my writing style. The writing process answers the question, sort of, but I suppose my writing style is a compilation of every author I’ve ever read, every show I’ve ever seen, and every song I’ve ever heard, with a large dollop of weird thrown in for good measure. I write action / adventure drama, but since ‘drama’ is supposed to be lifelike, and life isn’t lifelike without comedy and romance, it all ends up in the pot together. So there you go. Action, adventure, comedy, romance, flavor to taste with a genre, and serve piping hot.
OK, maybe I need to make dinner now. No, no, on to more questions!

As a child, what did you want to be when you grew up?
I didn’t know it at the time, but I always wanted to be Buckaroo Banzai. Y’know, an action-hero inventor scientist rock star. Yeah. Much like Malcolm Reynolds, I’m a fan of all seven.
Tell us about your “day job” as a high school teacher. I understand there’s a writing contest on the horizon for some of your students. How is it coming along?
I’m pursuing New Jersey’s alternate route to teaching certification for Biology / Life Sciences, which means I’ll be certified to teach anything with a significant organic von Neumann machine component. Biology, Environmental Science, maybe Health (not Phys. Ed.), possibly the Research class, since they do genetics stuff, but not until the senior teachers all retire. *looks at his watch*. C’mon, guys, I’m waiting. On top of that, I’ve put in my professional development plan for the next ten years to get my MBA and a Lit degree, then cross-certifying to teach Business and Language Arts as well. My teaching style, as my students will tell you, is a combination of class discussion, storytelling, and occasional hands-on, get-dirty, play-with-stuff science.
The writing contest is NaNoWriMo’s Young Writer’s Program. I’m working with the head of the Language Arts department, as well as drumming up interest from my bio students. So far, I’ve got a number of students interested, including two who have notebooks full of things written. I’ve spoken with the computer lab teacher to get them a place to work, and I’m currently running the whole deal past the principals to make sure we have their support.
It’s gonna be a blast. I’m actually considering doing TWO stories this NaNo, because I have lost my gorram mind. But Fae Eye needs a sequel, and the Blue Bloods story needs to get on paper. Electronic paper. You know what I mean, stop looking at me like that.
Is there a writer you idolize? If so, who?
Ayep. Terry Pratchett. Absolutely. Humor, philosophy, unforgettable characters, stories that just won’t quit, and prose that just won’t quit.
OK, bromance fanboy love fest over before I embarrass myself. OK, paused until the next time someone asks me that question. On a completely different note, is it odd that the Horsecow’s nickname for me is broman, which is only two letters from bromance?
Any conferences or appearances planned for the next year?
I’ll be at Philcon! On panels talking about what it’s like to be a published author! If anyone wants get anything signed, or ask questions, or yell at me, I’ll be there and willing to put up with anything that doesn’t leave a permanent mark anywhere visible outside office casual! Come on down, I’m not as crazy as people say!
OK, that’s a lie. I’m possibly less sane than they say. But no matter what they tell you, I have never done anything to anyone with a hamster. And I won’t have one along in any case. A stuffed ferret maybe, but no hamsters.
I’ve thought a lot about RT, but at this point I don’t think I’ll be able to swing it. Things are looking up for Otakon next summer though!
OH! If ANYONE who goes to the Dorian’s Parlor Steam Punk meet-ups pings me anywhere (here on the Decadent Blog, Bob’s Books on Facebook, my website), I’ll show up there to say hi, sign things, and generally wave the flag.
What question do you wish was on this list? Your answer?
What is the meaning of life?
If you’ve ever read “It was on fire when I lay down on it”, there’s a good answer there. It’s by a Greek philosopher Robert Fulghum met, who told him a story about how he has a little mirror he plays a game with, where he tries to shine light into dark places. He’s not the source of the light, but he tries to illuminate as best he can. Fulghum liked that one. I like it, but it’s not mine, although it along with Christopher Stasheff’s fictional saint explain how I got to mine.
I’ve been in a lot of dark places in my life. Some parts of me never leave those places. Some of them are places I see other people in. Some of those dark places have no light, not even the memory of reflected light. In those places, I sometimes find a need to light things on fire. Occasionally I’m the only thing I have to hand.
With all that in mind, I think of life as a struggle against entropy. From the standpoint of modern physics, there is no way to win that struggle. Which is no reason to give up on trying. After all, men ‘weren’t meant to fly’, but we visited the moon, and the birds haven’t managed that yet. So when things look darkest, and there isn’t even reflected light to be seen, remember St. Vidicon of Cathode and light something aflame. Perversity is mankind’s last, best hope against entropy.
Alternatively, 42.
Yeah, my head is a jumbled mess. Why do you ask?
Do you have anything specific that you want to say to your readers?
First of all, a big ‘Thank you!’ to everyone who reads my books. Two to anyone who reads them and LIKES them! On top of that, I have questions to ask them: What do you guys like? What don’t you like? I get ideas faster than I can write them down. If I know what you guys are looking for, I can prod Agatha and Penelope in the right direction with a poking stick.
Of course, as certain people can tell you, Agatha and Penelope have a mind of their own. For example, when a certain person said ‘SteamPunk Christmas, Military Romance’, Agatha extracted the comma and Penelope added ‘with Cyborg Zombies’. So be careful what you wish for, but wish away!

Always funny to hear from Robert!

Hi Robert!
For me I'm into anything paranormal. Although now that you mention it, SteamPunk Christmas Military Romance with Cyborg Zombies sounds pretty fascinating. I know I've never read anything like that:)