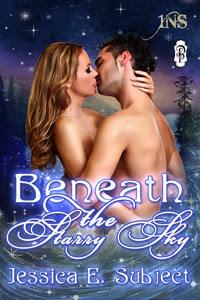 Plots – Maybe the plots are all very similar. I do believe that everyone across the universe deserves a happily-ever-after, regardless of race (including aliens), sexuality, and creed. But how the characters find their happily-ever-afters vary with every story.
Settings – In my science fiction romances, I’ve used cities and places I’m familiar with, or created my own planets and futuristic worlds. But in Beneath the Starry Sky, I set the story in Las Vegas, Nevada, a city I’ve never traveled to. While the city is foreign to me, it is not to many of my readers. Therefore, I had to ensure I had accurate details. After a shout-out to my fellow authors though, I found the details I needed to write this story.
Characters – This is my favorite part of writing science fiction romance. I can create a variety of different alien species and name them whatever I like, although I do try to keep the names pronounceable. I often use mythology to choose names as well. For example, in Celestial Seduction, Frey Berger and his home planet of Ginnun come from Norse mythology. In Beneath the Starry Sky, the hero and heroine are from Earth, but they are different from the normal population. Tamara Johnston has Alopecia Areata, an autoimmune skin disease, and Josh Summers has his own secret.
While there are these differences, I always try to encourage an emotional connection between the readers and my characters. And I like to show that love is possible for everyone.


Beneath the Starry Sky book trailer


About Beneath the Starry Sky:
Left at the altar with bald patches on her head and her self-confidence stripped away, Tamara Johnson must pick up the pieces of her life and face her Alopecia Areata, the autoimmune disease causing her hair to fall out. She is convinced no man will date a bald woman and arranges a one-night stand through Madame Evangeline’s popular service, 1Night Stand. With her new wig held firmly in place, Tamara arrives at the Castillo Hotel in Las Vegas for a night of passion and pleasure. Anything more than one night would mean exposing her bald head, and she will never do that to any man again.
Running into the Castillo Hotel, away from the paparazzi constantly at his heels, Josh Summers wants to spend his next few days locked away from the flashing lights and screaming fans. When he finds an incredibly sexy woman lying on his hotel room bed in nothing but lingerie, he thinks management has made a mistake. Leaving her behind, he heads for the lobby to get the situation rectified. But an unexpected text from Madame Evangeline sends him back to his room. Though unsure whether the woman on the bed is really his perfect match or just another fan believing him to be like his character on television, he knows he must find out, even if it means he must risk telling her his own secrets. If Tamara can handle his imperfections, she just might be his ideal woman.

About the Author:
Jessica E. Subject is the author of contemporary and science fiction romance, ranging from sweet to erotic. In her stories, you could meet clones, or a sexy alien or two. You may even be transported to another planet for a romantic rendezvous.
When Jessica isn't reading, writing, or doing dreaded housework, she likes to get out and walk with her giant, hairy dog her family adopted from the local animal shelter.
Jessica lives in Ontario, Canada with her husband and two energetic children. And she loves to hear from her readers. You can find her at jessicasubject.com and on twitter @jsubject.

Can't wait to read this story and yay- for joining the contemporary ranks!

Thank you, Landra! Yes, I do have quite a few other contemporary story ideas tucked away for later. I plan on intermingling them with my SFR stories. :)