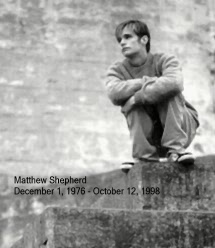 A topic close to my heart this month.

Fifteen years ago, on an October night, a young man stopped to have drink in a bar. Maybe chat with a few people. Nothing big. Just have a little fun. There he met up with two other men, both seemingly friendly, who offered (or who he asked for) a ride home. He never made it back. A cyclist found him the 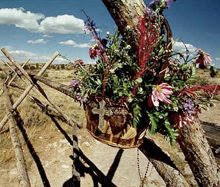 next morning, beaten but alive, tied to a fence like some macabre Halloween decoration. The only spots on his face not covered by blood were the tracks of his tears. His injuries were so severe doctors were unable to operate. Matthew Shepard lived for six more days but never regained consciousness. His attackers had pretended to be gay to get him into their vehicle in order to beat and torture him simply because he was homosexual. Protestors picketed his funeral with signs reading “No Tears for Queers.” That one horrible and unconscionable placard has stuck in my head for a decade and a half.

Matthew’s death remains the most recognizable example of hate against a gay man in the United States today. His torture and subsequent death launched the campaign for a hate crimes bill. Eleven years later, President Obama signed The Matthew Shepard and James Byrd, Jr. Hate Crimes Prevention Act http://www.justice.gov/crt/about/crm/matthewshepard.php —better known as the Matthew Shepard Act—into law on October 28, 2009. (Byrd was beaten and dragged behind a pickup by known white supremacists until dead.) The Act expanded the 1969 United States federal hate-crime law to include crimes motivated by a victim's actual or perceived gender, sexual orientation, gender identity, or disability.

This legislation now makes hate driven violence, no matter the recipient, a major crime. Still, across the nation brutality continues against those perceived as different or weaker somehow. Race, gender, sexual orientation, and a plethora of other excuses pop up again and again to justify violence against individuals or groups. There are laws in place to handle such issues, but stopping it begins with the individual. We live in America where free speech declares we all have the right to speak out against things which concern us. Hate should concern everyone.

No one has to approve or support the ideas, lives, and attitudes of others. But does anyone have the right to end a life just because someone is different? Free speech gives us the right to take a stand against hate. We can say no to violence and yes to acceptance. If you hear of or see such things, be the voice of reason, call the police, take a stand…but don’t ignore it. Had someone who knew Aaron McKinney and Russell Henderson’s intentions intervened in some way, even to turn their thoughts to other things, perhaps Matthew would not have died. No human being, whether different from the majority or not, deserves to suffer this type of treatment. Martin Luther King, Jr. told us all of his dream,  and we have come a long way since then, but we have a long way to go until “all men are created equal” and are judged only by the “content of their character.” Love is love no matter what.

All my hope and friendship to readers, friends, and countrymen alike—please, remember those who have suffered or died at the hand of hate and help stop unjustifiable violence.

Matthew Shepard Foundation http://www.matthewshepard.org/
The James Byrd Foundation for Racial Healing can be reached at 888-656-6514 or by electronic mail at byrdfound@juno.com

Good point and something we should all think about.

Strangely - I was researching for my first MM book set in Wyoming and came across the story of Matthew - horrifying reading! Without using his name I incorporated a ref to that level of discrimination in my story and unbelievably had a fwe people who complained about another aspect of bigotry in my tale - because the dude ranch owner treated a guest badly because he was gay. I thought - this prejudice still goes on and will go on unless we all stand up and speak out!! So good point made, LC!

Thanks, Becca and Barbara. I know people who are ordinarily nice who become nearly rabid when it comes to homosexuality. I cannot nor will I ever understand it. All any of us can do is speak out against violence when we see it brewing and be open-minded in our own actions.

We all bleed RED, therefore there is no difference of creed, color, or sexuality.

It's just hard to fathom sometimes, the amount of hatred a person has for another, just because of their choice.

I agree. I cannot understand how human beings can treat one another with such disrespect and anger for something that in some cultures has been celebrated. Differences (gender, culture, race, sexuality, whatever as long as it does not hurt another) should be savored as they are the flavors of life.