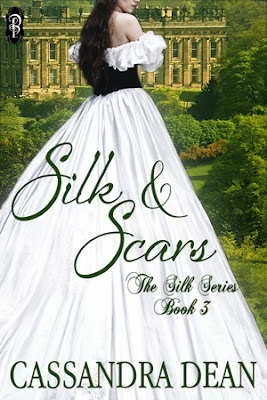 I’m super stoked to announce SILK & SCARS, book 3 in my Silk Series, is now available!
This book was a bit of a nightmare to write. It took me f o r e v e r to understand Gwen and Edward’s story, and this book was definitely a case of how my original idea morphed into something completely unrecognizable by the end. Originally, I wanted Edward to be a gruff, blustery kind of duke, growling at Gwen, who would refuse to allow him to treat her that way. However, as I wrote, Edward suddenly loved Gothic novels, became an introvert and before I knew it, I had a sensitive, shy duke who desperately wanted to talk with Gwen but had no idea how.
Gwen herself was hard to get a handle on as well. I just couldn’t figure her out. Why did she dare to write letters to a duke? What was her motivation? What were her internal fears that drove her to be the person she was? Finally, I discovered who she was and...Welp, I’d love the say the story flowed from that point on, but it totally didn’t. It was still a tough slog, but I got there in the end and I’m really proud of how it turned out.
I hope you enjoy!

For over a year, Miss Gwendolyn Parkes and the Duke of Sowrith have corresponded. At first an error, the letters quickly became something much more, a friendship forged on like minds and perhaps the hope of something more…
When Gwen is compelled by her employer to attend the duke at his Dartmoor estate, she is devastated to find her beloved friend cold and imperious, even if he is the most handsome man she’s ever seen – despite his scars.
Edward, Duke of Sowrith, has longed to meet Gwen. Arranging her passage to his estate, he is tongue-tied when confronted with her quiet beauty. All too aware of the twisted ruin of his face, he allows fear to hold him silent…until Gwen’s safety is threatened.
Finally together, they grow closer until it seems they can never again be apart – but can a commoner and a duke find a happily ever after?

Excerpt:
Crossing her arms over her stomach, Gwen leaned forward, pressing deep. Good heavens, she was nervous, and excited, and nervous. She was going to meet Edward. One moment soon, he was going to open that door, and she would see him. She would see the man she’d corresponded with for over a year, to whom she’d expressed every thought, and who had expressed his to her. It did not matter that he was a duke, so far above her in consequence as to be laughable. He was her friend, and, at last, they would meet.
Foot tapping wildly, she leaned her head back against the wall. This was all so ridiculous. She was ridiculous to have this unbridled excitement rioting through her. Exhaling, she caught the stare of the gargoyle. The gargoyle knew how ridiculous her thoughts. Its stone features laughed at her, and in a fit of pique, she poked her tongue out.
The study door opened. Leaping to her feet, she swayed as the blood rushed from her head.
Lord Beecham appeared in the door way and, his eyes lighting upon her, crooked a finger. “Miss Parkes. Come.”
Heart beating a rapid tattoo, she bent to grip the handle of her carpet bag. Lord Beecham had abandoned the door by the time she had gathered herself enough to approach, the worn wooden handle of the bag pressing deep into her palm.
Passing through the doorway, Gwen stopped, her jaw slack as she looked about the chamber. Lit only by the flame of the massive fireplace dominating one wall and the wan flicker of a lamp seated on the enormous desk, the room was huge, cavernous even, and dark. So dark. The faint light picked up rows upon rows of books while heavy drapes of an unidentifiable fabric covered what she could only presume were windows. The floor was the same stone as the hall, the only carpet appearing before the fire under the clawed feet of a large armchair.
Her gaze returned to the fireplace. A man stood before it, his back to her, right hand held by his left.
Her heart, already racing, started a wild thud against her ribs. That was him. The duke. Edward.

He did not turn, though she willed him to. Willed him to turn so she could utter that most important of phrases, the one she’d longed to say for an age now.
Hello, Edward.

Cassandra Dean is a best-selling, multi-published author of historical and fantasy romance. Her latest novel, SILK & SCARS, is part of her popular Silk Series featuring law-loving peeps and their happily ever afters. Her next novel will be THE DIAMOND SERIES BOX SET, which gathers together stories from her Diamond Series, romances set in the Old West.

Cassandra is proud to call South Australia her home, where she regularly cheers on her AFL football team and creates her next tale.