LIONS AND TWINKS AND BEARS, OH MY! 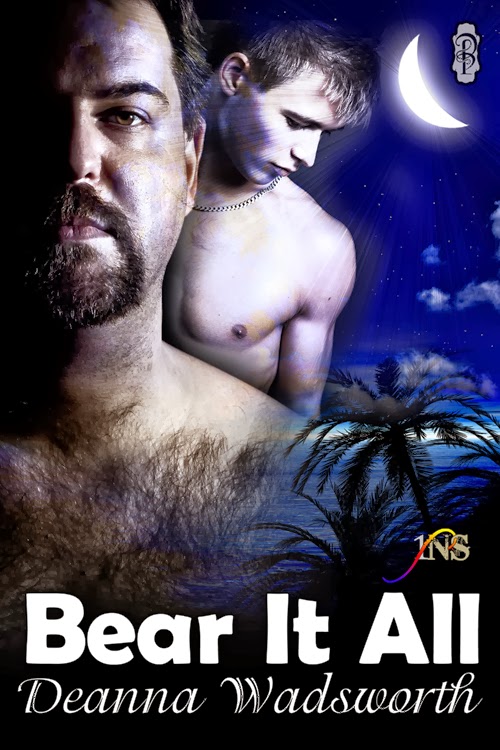 Well there really aren't any lions in BEAR IT ALL, but it just sounded funnier that way, don't ya think? Well, everybody loves a twink/bear story. In my first 1Night Stand book, I play on this m/m trope and the result is a sexy story of misunderstanding with a HFN and a tropical setting. I think the result is really a short fun read

BLURB:
Travis hired the 1 Night Stand agency because he wanted a hot encounter with his dream man...a sexy older, hairy man and John looks custom made to order.

John, after losing his partner three years ago, is looking to learn how to accept another man into his bead again, to learn to live again. He thinks a one night stand in the Caribbean is the answer. But when John sees the young, thin and much smaller Travis he thinks the agency sent the wrong man.

Will Travis get his bear after all?
Will John open his heart to the unexpected?

EXCERPT:
Damn, Madame Eve knew how to deliver.
Unable to believe his luck, Travis Hunter half wondered if the woman had somehow snooped in his private spank-bank of fantasies to create the man just for him.
John Godfrey—well, that was the name he’d given 1NightStand. Travis still couldn’t be sure if others had been as dumb as himself and actually given their real names to the service. Regardless, the name suited him. Simple and understated.
Ironically, everything John was not.
His date—he couldn’t bear to think of him as only a hook-up—arrived on the pool deck moments after Travis ordered his second mojito. The man’s unbound, sandy blond hair fell almost halfway down his back, just begging for Travis to run his fingers through it. Even as all the tanned beach studs frolicked with their bikini-clad girlfriends and kids splashed about, John still managed to turn heads. Then again, not every day did someone tower over the crowd with six-foot-five inches of ripped, hair-covered muscles.
Travis swallowed back the drool when John gripped the back collar of his T-shirt with one hand and pulled it off before heading for the shallow end of the pool.
“Hey, get a load of the Grizzly Adams,” a girl nearby whispered. “Ever heard of a back wax?”
Travis shot the two girls a look as they fell into fits of hysterical giggles. He curled his lip in disgust, suppressing the urge to snarl at them. Bimbos. What the hell did they know about real men? Real men knew how to fix things. They drank beer and ate meat and potatoes—not salads and tofu. Big, masculine men could hold a guy up and fuck him against a wall so effortlessly he didn’t have to worry about being dropped.
And most of all: Real men had hair.
Lots and lots of delicious body hair.

Deanna Wadsworth might be a bestselling erotica author, but she leads a pretty vanilla life in Ohio with her wonderful husband and a couple adorable cocker spaniels. She has been spinning tales and penning stories since childhood, and her first erotic novella was published in 2010. When she isn’t writing books or brainstorming with friends, you can find her making people gorgeous in a beauty salon. She loves music and dancing, and can often be seen hanging out on the sandbar in the muddy Maumee River or chilling with her hubby and a cocktail in their basement bar. In between all that fun, Deanna cherishes the quiet times when she can let her wildly active imagination have the full run of her mind. Her fascination with people and the interworkings of their relationships have always inspired her to write romance with spice and love without boundaries.