My Heroes Have Always Been Bad Boys

By P. Kirby
So, as of a few months ago, I’m a fan fiction writer. Technically, I've always been, but for the first time I have posted my fan wankery on a public venue.

What spurred this madness? This need to display my fondness for playing in another writer’s playground?

Loki. Destroyer of urban infrastructure and man of glorious purposes.

The first time I watched the movie Thor, I thought, "Thor’s pretty, but where's his story arc? He throws a tantrum, gets kicked out of Asgard, spends two days on Earth and is transformed by the power of Jane’s pretty brown eyes. Riiight."

Loki, on the other hand...had a point. Thor's been an arrogant, blowhard for a millennium, and yet all-knowing and wise Odin decides to officially make him his heir. Honestly? I think Loki showed astonishing forbearance waiting this long to spoil Thor’s party. Were it me, I would’ve strangled Thor with his red, "Doth thou mother know you weareth her drapes?" cape centuries before. 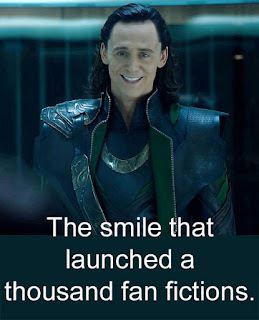 And while the fandom is full of “Loki stumbles over his conscience and is redeemed” story arcs, Loki, as I write him, is a jerk. Because, Loki without mischief, chaos and flexible ethics, just isn’t Loki. He's sex on a stick because he can't be tamed.

My affection for the big bad started early, probably before I hit puberty. The allure of the dark, the strange, the rule breaker, the cad, has always been strong. There were others, but one of my first bad crushes was Prince Lotor from the old anime cartoon, Voltron: Defender of the Universe, season one.  Eons ago, when I was but a wee fangirl, I used to run home after school to watch the show in syndication.

Voltron is a giant robot made up of five robotic lions that are piloted by a team of forgettable, goody-goody heroes. "Defender of the Universe" is a superfluous phrase since the gang spends all their time keeping the evil King Zarkon from taking over the quaint little planet of Arus. (Apparently, evil is too lazy to bother with the rest of the 'verse.) Zarkon is a one-trick pony who relies exclusively on huge robeasts for every one of his inevitably doomed attacks on the planet. (His learning curve is steeper than the Himalayas.)

Arus is ruled by the beautiful princess, Allura (because it's never a "homely" princess). The storyline suggests that she and Keith, Voltron's commander, share an attraction, but me, I glommed onto her stalker, Prince Lotor, Zarkon’s son. Lotor is a smarmy, slick, pointy-eared, blue-skinned SOB. Adolescent me could not understand why the princess didn’t want Lothor. Because, Keith, the hero? Bo-ring.

Similarly, there was the delicious Sheriff of Nottingham (Alan Rickman) in the otherwise awful movie Robin Hood Prince of Thieves (1991). There’s a scene where Nottingham is attempting to force Marian to consummate their marriage, which, regrettably brings out my dark, shameful side. The woman in me knows Nottingham’s actions make him utterly unredeemable. And yet, every time I watch the scene, I think, “Oh, come on, Marian, you know you want him and not Robin ‘I can’t do an English accent to save my life’ Locksley."

Then there was that point where Nottingham tells his cousin that he will cut out Robin's heart with a spoon. To which, the cousin asks, "Why a spoon, cousin? Why not an axe?"

And Nottingham says with the yummy snippy intonation that is all Alan Rickman, "Because it's dull, you twit. It'll hurt more."

Oh, yeah. Quite often, the Big Bads get the very best lines.

Which is why they are delicious to write. Without the trappings of diplomacy, they can say all the obnoxious stuff we are all thinking, but wouldn't dare to speak. My Decadent release, The Music of Chaos, doesn't have an all-out big bad, but the characterization of the heroine's unwilling sidekick, Breas, is certainly influenced the many villains I've loved. Breas is an anti-hero, not a villain, but freed of niceties like politeness, he has absolutely no filter on his mouth.

Anyone else share my fondness for bad boys? Who are your fave villains or anti-heroes?

LOL - Yep I like Rickman's 'Cancel Christmas' - he has the best lines!! The bad guys always seem to be more interesting. I'm pretty keen on the serial killer in The Follwowing - at the moment. Far more fascinating that Kevin Bacon.