You’ll die in three minutes without oxygen, three hours without shelter, three days without water and three weeks without food. But could you live a lifetime with a broken heart?

One is a battle-damaged veteran, the other a desperate woman who will go to any extreme to get his story. When their worlds collide, sparks fly and old wounds open. As the chasm between the fated lovers widens, it might be too big to cross.

One town, two lovers, and a second chance at finding mercy. 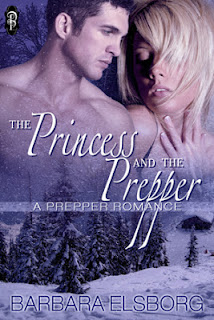 The Princess and the Prepper
Evan's Point Series

Lili knows she shouldn’t accept a lift from a stranger, but as usual, she leaps from one disaster to another. The consequence is being stuck in the middle of a snowy nowhere wearing next to nothing, and this time, being unprepared looks likely to kill her.

Grant lives in an isolated cabin for a reason. He’s prepared for almost every eventuality. The last thing he wants is some needy person interfering with his ordered life. When he gets into bed with a woman he rescued from certain death—just to warm her up, of course—Grant discovers something else he’s not prepared for. His heart opening.
A match made in heaven, until secrets come knocking. Lili is not just a simple woman in need of shelter, and unless she can survive dealing with her background, it doesn’t seem possible the happiness that’s fallen out of a blizzard can heal Grant’s own past.

Click here  for more information about our Prepper Romances line and how you can submit a story for it!

Phew, we've all survived the end of the world! I really enjoyed writing one the starter stories for the Evans Point series. Dawn Jackson came up with a fantastic setting based on reality and we were away..... Hope you enjoy all the stories.

Such a fantastic idea for a series! Good luck with the launch, everyone!

I loved writing in this series with Barbara and Arlene. Both bring so much to this new line. Having had the chance to read both The Princess and the Prepper, and Falling For Water, I can honestly say their stories rock.