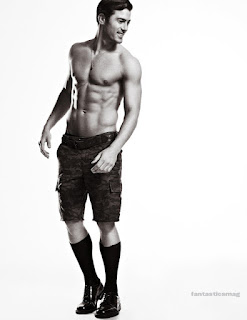 I wish I had the tact (and good sense) to keep this obsession to myself, but I feel I’m doing the world justice by bringing everyone I can into the York Guy Fold. Watch the commercial on YouTube if you haven’t had the chance to see it already. Join me and as the Borg once prophesized “Resistance is futile.”
From what I can gather the guy’s name is Gavin Dunne, and his ability to sport old man beach fashion is spectacular.
Every old man on the beach sporting knee high black socks imagines he’s Gavin Dunne.
And to make him even more sinfully good than the chocolaty minty sweet he promotes, he’s Irish born! Though,if Google hasn’t led me astray, immigrated to the US with his family at the age of 10. Internet stalking isn’t an exact science.But thankfully it offers us stalkers a sense of community, check out this Tumblr hit.
He’s going to take his time eating it, so he can extend the pleasure…and I mean the candy of course :-)
Olivia Starke
I’ll be holding a drawing for a $5 Amazon gift card in May. All you have to do is sign up for my newsletter on the Home page of my website!
What an easy way to earn $5!

Blurb:
Sex is better when you’re one of the undead.
When her luggage is stolen at the Las Vegas airport, Kelly finds herself stranded and broke. Lucky for her, sexy Detective Nick Rodriguez offers her a room for the night. And when he whips out the handcuffs, she is ready to offer gratitude for his hospitality all night long.
Of course, when in Vegas the party doesn’t stop even if someone wakes up dead….
Excerpt *ADULT CONTENT*

Her sultry smile encouraged him. “And what kind of woman do you think I am?”
His fingers moved to the fly of his jeans. “One that can handle whatever I give you.”
She arched her back, sucking her bottom lip between her teeth, a long moan slipping from her throat. He held her gaze while he undid the fly of his jeans and shoved the denim down. Her eyebrow quirked as his hard cock sprang free.
“Commando?”
He shrugged. “Laundry day.”
“Oh, I’m not complaining.”
He jerked the T-shirt over his head, before taking her in from head to toe. Her curves left little to the imagination despite a modest T-shirt and jeans. He licked his lips, ready to get his mouth on every inch of her body. His planning had been off. Having her tied to the bed made it impossible to get the shirt over her head.
Fuck it. Never a man to give in to defeat, he crawled over her and claimed a nipple between his teeth. Kelly bucked into him, her cry of pleasure urging him on. Palming the other breast, he squeezed it. He ground his hips into her, slipping his hands beneath her top to savor the cool satin of her stomach. Needing more, he shoved the shirt over her breasts, and with a growl of frustration, grabbed the delicate lace of her bra and yanked. The cups ripped, her breasts spilling out to his greedy mouth.
“Please, Nick, oh God….”
Nick pushed away, straddling her. “Fuck me, I’m going to come before this even starts.” It’d been several months since his last relationship, and his balls had drawn tight, ready to blow.
Her eyes widened, studying his every move. “Are you going to torture me and not let me play?”
He circled his girth with his hand, stroking down the length and back up again. Her eyes glowed in the low lighting, and her pale hair fanned around her head like a halo. His personal angel, if angels could be nymphomaniacs.
“We have all night. Plus, I kind of enjoy watching you squirm.”
She bit her bottom lip until it turned red and plump between her teeth.
at 3:01 AM

BOOO YAAAAA for the Irish hottie! WOOT But shhhhh don't tell Shaun and Devlin from my Irish Kisses series, they might get very jealous LOL Devlin may even bulk buy the york patties (well, he would if were available in the UK) to eat and tease regulars at Bell's Irish Pub. You know he would LOL LOL
Lovely way to start the day...glad this was my first blog visit of the day. What a tasty treat :) Thank you!!

Wow, LOL. That is my new fav commercial!

*wipes the drool from my mouth* Wow! This made my day, thanks! :)

That Irish hottie is yummy! Oh to be a York PM Patty! ;)

At first I thought, yeah right, how can a York peppermint patty be sexy... Then I saw the video! *swoons* I won't tell you how many times I watched it ;)

Glad you stalked and shared!

I have to keep watching. I'm addicted!