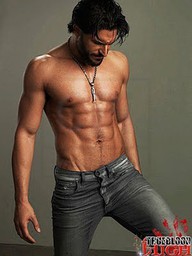 All right, let’s use this Hump Day to enjoy a fine muscley hunk of man-goodness. Mr. John Magg…uh, John Magn…John Maggendennnn…okay, I can’t say his last name. Let’s just use the name we love him for…Alcide. 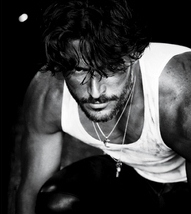 (I mean seriously, can a man with a look like this be called anything but “OH GOD YES!”)
So what if I’ve never watched True Blood?I swear someday I’m going to pick up the series and delve into its hedonistic pleasure. I just don’t have the room for one more addiction in my hectic schedule. 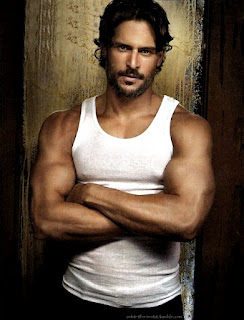 (Not to mention my constantly licking the TV screen couldn’t be good for me or the TV.)
He’s everything an Alpha Wolf should possess—the dark intense eyes, the delts, the biceps that could cause lust induced hysterics……………Sorry, couldn’t stop staring there for a moment. If you need me, I’ll be in Google Images….
Olivia Starke www.authoroliviastarke.comhttp://romancingthepentoday.blogspot.com
Olivia Starke calls a little town in southern Missouri home. Some of the most beautiful country in the U.S., she loves the Ozarks and hikes, runs, kayaks, or rides horses whenever possible. When not working at her laptop or in her retail management job, she’s playing mom to an ever expanding collection of dogs, cats, and horses who find their way to her little farm.
Midnight Madness 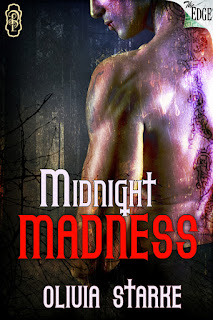 Blurb: Maddie takes a weekend camping trip to forget her two timing ex-boyfriend. Instead of peace and quiet, she stumbles upon two hunks who put the wild in wilderness. And they have plans of their own—to heat up her sexless life. An evening of rowdy lovin’ is just what she needs to get over her broken heart.
When she joins them in a trio that leaves her satisfied and exhausted, they have one more surprise in store called Midnight Madness...
Excerpt:
Who the hell has an orgy in the middle of the wilderness?
Reported random animal attacks had been Maddie’s concern, not the harassing sounds of sex. She needed peace and quiet to lick her wounds and sort out her life. Not the lusty grunts of some overzealous man giving it to his lady. For the past two hours.
Seriously, two flippin’ hours? She charged through the woods, ready to rain on someone’s parade. They’d just have to find someplace else to have an obscenely loud lovefest.
“God, the nerve of some people.”
She batted at a fly buzzing around her head. So what if she hadn’t had an orgasm in four months—thanks to her selfish ex-boyfriend—well, not one that wasn’t self-induced. And who cared if sex had been nonexistent while the relationship had suffered a slow, painful death.
“Men suck. Certainly no marathon lovemaking for me anytime soon.” She yanked at a limb and flinched when it lashed back against her face, knocking her glasses off. Unreasonable anger boiled over.
“Son-of-a-bitch, piece of….” She kicked out at nothing in particular, giving in to the long overdue temper tantrum. Brambles hooked around her foot and she did a face plant on the leaf-covered forest floor. My utter lack of grace strikes again. Rolling onto her back, she spit out dirt and stuck a scraped finger into her mouth. The wound smarted, distracting her from her fury. She stared at the blue sky through the budding tree limbs, sweat breaking out on her brow. The unseasonably warm spring had driven her to seek a peaceful weekend camping retreat. Maybe she should’ve opted for a hotel with air-conditioning instead. And a six pack of beer, give or take another twelve pack.
“Oh God, yes! More, more, more….” The deep, male voice echoed through the hollow.
Maddie pummeled the ground with her fists. “You oversexed freak!” Her words were drowned out by the man’s grunts.
at 3:01 AM

I know I'm going to get killed here but - he just doesn't do it for me. I'm pretty sure it's the beard - I really don't like facial hair. I have to shave at least three times a day- ooh TMI - anyways - body is great, eyes are great, chin is not. His I mean, not mine.

I read the excerpt and it sounds very steamy!! Definitely putting this on my TBR list!

@Barbara I don't normally like facial hair either, but I can't deny that body lol

@ Barbara no worries just more for me :)

I have mentioned my obsession haven't I.

Okay, I don't watch True Blood either. I've seen other pictures of him that just don't do it for me, but there is something about that last pic that leaves me wanting more. :)

Very nice! =) Thanks for introducing me!

WOW!, Super yummy, hawt, smouldering, sexy, dark, stunning, striking, ...excuse me, I got caught up with the drool streamlining down my chin! OM...I want! The werewolf and the book! Nice tease Liv, & I love her tantrum! Perfect humor and has me intrigued! I have got to get me a kindle in the near future! So many good books and nothing but my laptop to download on!
Congrats, you have a gift for writing my dear!
Hugs,
Kali

WOW!, Super yummy, hawt, smouldering, sexy, dark, stunning, striking, ...excuse me, I got caught up with the drool streamlining down my chin! OM...I want! The werewolf and the book! Nice tease Liv, & I love her tantrum! Perfect humor and has me intrigued! I have got to get me a kindle in the near future! So many good books and nothing but my laptop to download on!
Congrats, you have a gift for writing my dear!
Hugs,
Kali

Wowza, I think I need a tall glass of water! I love my facial hair on guys - sexy, scruffy beards and long hair...sigh...

I like the facial hair. He has the right build for me. I like muscles but so many models just have too many. I wish my hubby would grow his beard back.

For me, facial hair all depends on the guy and Alcide does it very, very well.

I agree about the muscles ANON - too many is a turn off for me. I don't know why because I know most women love them. I don't want a wimpy body but somewhere between that and Mr. Universe would be fine. Are you listening, husband!!!