I love me some alpha males especially when they are in uniform!  I have to admit my lust for the type started with my interest or shall I say obsession with science fiction movies.
Who could resist the dashing Han Solo wearing his Corellian uniform? 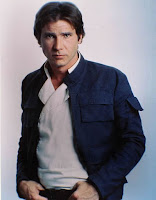 Then there is Peter Weller in Screamers. 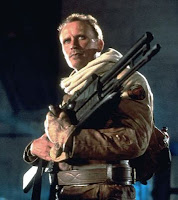 And let's not forget the devastatingly handsome Karl Urban as Vaako in The Chronicles of Riddick! 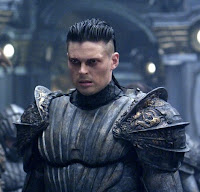 But if I had to pick my all time favorite, it has to be James Morrison in the defunct Fox Scifi series Space Above and Beyond.  He played the tortured and consummately angry In-Vitro, Colonel T.C. McQueen.

I must admit there is a bit of James Morrison in the hero of Cold Warriors and the sequel Ice Peace's Colonel Medoro Keegan.
Keegan is a man tortured by his past but bound by duty and his love for cryo warrior Caitlin Driskoll to work for a better future.
Cold Warriors and Ice and Peace will be released soon.
Who are some of your faves?
While you think, here is a blurb from Cold Warriors:

When Caitlin Driskoll is awakened from a cryogenic stasis, she’s got a lot of adjusting to do. It’s a new century and the planet is at war. Once married to a Navy JAG, she now experiences life from the viewpoint of a Jarhead, and the view isn’t pleasant.
Colonel Medoro Keegan lost the two most important things in his life during his Marine career: his wife to friendly fire, and his ability to fly combat missions. Now, he’s stuck aboard the Blanchard as the XO. The Corps is the only family he has left and he’s not about to lose the last thing he values.
Until he meets Caitlin, who isn’t shy about telling Medoro what she thinks about his Marines. How can such beauty wrapped in an icy body have so much fire?
It’s the future, and a new kind of prejudice has replaced the racial prejudice Caitlin experienced in the last century. After all, when you’ve been given a second chance at life, you are expendable.
And a blurb from the sequel Ice and Peace:

Peace is on the horizon for Earth and it's allies.  After a series of mysterious attacks on several military installations, retired Marine Colonel Medoro Keegan-who had left the Corps in a cloud of disgrace-- is called back to duty.  Eager to redeem himself, he jumps at the opportunity to serve again on the ship he always loved, the USS Blanchard.
Caitlin Keegan, is the only survivor of a devastating battle that turned the tide of war.  Because of her status as an O-Cryo, she is bound by duty to serve a planet that refuses to grant her the freedom she desires.
Because of the recent attacks, Caitlin is assigned to the Blanchard.  Once on board, she  has to fight for her planet, her marriage and her life.
Bio
Clare Dargin is a an author of Science Fiction and Military Science Fiction Romance.  She has been writing stories all of her life before being published in 2007.  She is a great fan of all things science fiction and romance and loves promoting the genre.
She is an educator by profession and holds a Bachelor’s Degree in English from a major mid-western university.  She presently resides in the Midwestern United States and is pursuing a graduate degree.  In the future she hopes to expand her writings to include non-fiction, historical romance, and contemporary novels.
Check out her release from Decadent Publishing- Kybernatia
at 3:01 AM

It's so cool to find someone else who watched Space: Above and Beyond!! I had a thing for Rodney Rowland though, who played Cooper, another "tank". I'm all for Chris Pine as well. :)

I've always liked the guy on your covers, Clare. :)

I don't care if I'm 115, I'll still think Han Solo was one of the hunkiest sci-fi heroes ever.

How about the hotty from Outlander, Kainan?

He stars in Person of Interest now, but OMG, I love him in the Outlander movie.

His ship crashes on Earth in 709AD and he ends up being taken captive by Vikings who, in the end need his help in killing a nasty creature from another world that came to Earth, stowed away on his ship.

And I still think Hans Solo is hot.

More yummy guys! I love it!