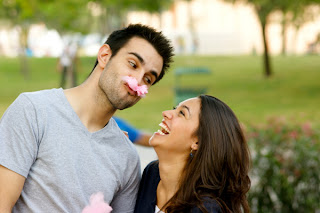 Poll after poll declare that humor and intelligence are sexy. I agree whole heartedly. In fact, a combination of the two are unbeatable. I am married to a smart and funny guy. (All right, I think he is hilarious but most find him a little cheesy sometimes.) 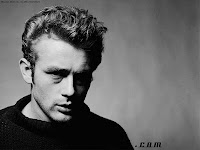 In contrast to what the polls say, although they are smart, romance heroes are rarely funny. They tend to be dark or damaged, brooding, sometimes sullen, or men of few words. Heck yeah – gimme that James Dean type.) I rarely come across a funny hero no matter whose work I read, yet a sense of humor consistently tops the list of preferred attributes, above even a great body. So what’s the deal? Why do women want their real life men to be funny but their fantasies seldom are?

I have thought long and hard about this, sacrificed hours and countless cups of coffee and chocolate to my pondering, but here is my personal conclusion. As a reader/writer I want a man I can save emotionally while he sweeps me off my feet in his big strong arms and shows me all the reasons he’s willing to overcome/change/be a better man just for me. Sigh... And...more importantly...as a writer my comedic timing sucks. Seriously, crickets chirping level of suckage. More than one editor has said, “I don’t get it. What is he trying to say?” So I simply leave the humor out more often than not – a deep dark hero is easier to write.

BUT...reality is far different. Everyday drudgery and troubles do not enter the fantasy. Real life holds good days and bad. When I crawl into bed at night, I want a man intelligent enough to know when I want him to tilt the axis of my world, and when I just need him to listen while I vent. I want the man who can make me see beyond the negative to the ludicrous when I am on the verge of tears. My hubby can make me laugh even when I’m so angry with him I want to do something drastic like sell his Harley. He always finds a way to break through the daily crap to make me smile. And that folks is crazy sexy to me. However, in my fantasies, I’ll stick with the strong silent type as long as he’s hot. 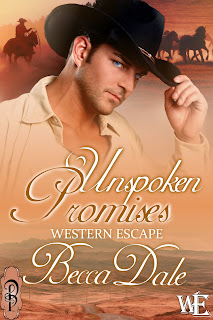 BLURB:
Billie Jensen hates liars and cheats. She’s spent her entire life watching her mother forgive the unforgivable with just a few words from a smooth-talking man. So different from her father, Officer Treynor Pandoah seems like everything Bille has ever wanted—quiet, solid, and truthful—until he snuggles up to another woman on Valentine’s Day. He says her eyes lied, but how can she trust a man who won’t share what’s in his heart?
Treynor’s done waiting for Billie to forgive him for something he didn’t do. A man shouldn’t have to explain himself to the woman he loves, but if he can’t find the words to take the tears from her eyes, he could lose her to Unspoken Promises.
http://beccadale.blogspot.com/
http://westernescapedecadentpublishing.blogspot.com/
at 3:01 AM

I like funny guys - and I write them funny too. I'm lucky enough to be married to a real joker! Though I do feed him the best lines, albeit accidentally. Nut humor isn't easy I agree!

LOL - I envy your ability to write believable humor, Barbara. I wish I had that skill.

My guy has a different sense of humor than myself, but he always makes me laugh. As for writing funny guys, I'm the same way. No one gets my jokes. I try to add in something my hubby would say every once in a while, but that's about it. :)

I love humour when it's dark and snarky and even commanding - but at home my husband's best asset is his ability to crack me up, even when I'm fuming. Yep, that will take me into the long years with him! Great post!

Where did you get that picture of Einstein? He is soooo HOT he's on FIRE! *still snorting onto my keyboard* Thanks for the laugh. Humor is hard to write partly because it is very subjective. Humorous romance is even harder. Maybe humorous heroes don't happen because as you said we don't have to live the daily grind with them. After a month with dark and brooding handsome hunk, I'd probably stab him with a plastic fork just to see if he really is human or some alien construct.

I like guys with an unusual, sometimes twisted sense of humor. And as for writing them, I suck at that.

Well you ladies have gone a long way toward reinforcing the idea that humor is vital in daily life. I agree Jaleta - I would have to stab my guy if he didn't know how to laugh in the face of daily struggles - I might not be nice enough to use plastic though.

If anyone knows a good book that teaches how to write humor give me a shout.

I write a lot of short humor - very twisted dark humor. It is hard to pull it off. Even then, some people will find it hysterical and some will tell me I'm the worst writer ever. Romance is easier to pull off, IMO.

Lol Becca - I'm married to a strong, silent type (and strangely, that's what attracted me to him *headthump now*) and yes, sometimes I do wanna poke him with a fork just to know he isn't a cyborg or something. :) I'd love a funny man, but I think after a while, I'd want to kill him because there's super good use for a strong, silent type - read that as, I'm the only one who rants at home. :)

And I join you in the cannot-write-funny boat. I couldn't write humour to save my life!