Decadence, Vice, and the Victorians 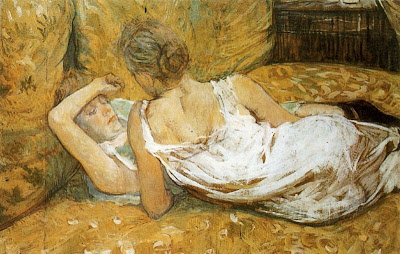 by Sorcha Mowbray
Since I am on the Daily Dose of Decadence blog I want to talk about the decadence of the Victorian era. What? What decadence? Well despite the appearance of a superior social morality, the Victorians were very, very naughty! They indulged in all kinds of decadence from the fairly unobjectionable to the downright naughty.
The decadent movement in art and literature led to a plethora of art for art’s sake being created. Much of it was in reaction to the realism movement and the conservative choke hold on society. The Victorian’s were very good at hiding and/or ignoring their vices.
Drugs were a serious problem during this period. Opium was readily available, but the real addiction of society was laudanum. It was prescribed for every possible ailment and was cheaper than gin. Women in particular were heavy users of the drug and even gave it to their children. Absinthe was another common drug, often used in conjunction with laudanum. A hallucinogen, absinthe was popular among various artists and their crowd to stimulate their creative juices.
Despite the strict religious guidelines, or perhaps because of them, prostitution was rampant. Men were discouraged from self-servicing, so they frequently turned to prostitutes for relief. One statistic I have seen claims there were over 7000 prostitutes in London in 1858. For women, it was the best source of income. A low class girl could make as much as twenty pounds a job vs sixty two pounds a year as a factory worker.
Sex was completely repressed and yet utterly entwined in Victorian society. Women were “manually stimulated” by their doctors to help keep hysteria at bay, men sought out prostitutes regularly if they didn’t have a mistress at their disposal, and pornography was a growing problem.
As a result of the strange relationship between Victorian’s and sex, caning, birching, and other forms of sadomasochistic release became popular. It is in this period that the roots of BDSM become very clear.
It is all of this decadence that stirred my creative juices and led to Love Revealed. I was intrigued by the juxtaposition of society’s strictures and the hedonism that seemed to be rampant in London. I set my hero and heroine smack dab in the middle of this churn and gave each of them their own issues to deal with in addition to outside pressures. The question was; what would happen?
As it turned out a lot, but I don’t want to spoil anything for you all. *wink* Now, I know that decadence hasn’t really gone anywhere, it just keeps changing and possibly getting better. For me, I look forward to my annual trip to Vegas with Mr. Sorcha Mowbray. We go and enjoy all kinds of vice and decadence from sinful food to burlesque shows to gambling. It is always a fun filled trip with very few boundaries.
What is your decadent indulgence? Too much chocolate?Shoes?Lingerie?A vacation?One lucky commenter will win a copy of Love Revealed, and don’t forget to pop over to my group blog Silken Sheets & Seduction for another chance to win! 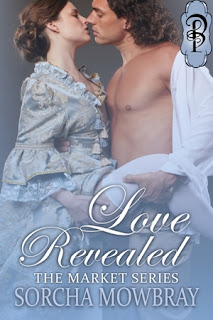 Love Revealed
by
Sorcha Mowbray
Blurb:Lady Katherine Drummond played by the rules of society, even after they turned on her. Shunned by her peers, she keeps up appearances by day but allows her true self out in the privacy of The Market. It is there in the arms of one man that she truly comes alive. So much so, she signed a contract to be his for six months. Despite never having seen his face and knowing him only as Sir, she fears losing her heart to him.
Lord Raymond Tarkenton, the Earl of Heathington, despises being one of the most sought after bachelors of the Ton. He could never ask a woman of his circle to submit to his sexual needs, and a mistress would never be an option. For now, one masked woman at The Market holds his undivided attention. When he realizes that his masked lover and Lady Katherine Drummond are one and the same, he must find a way to convince her that they are bound together by more than the straps at her wrist and the contract they signed. He must reveal himself and his love to her.
Gotta have it? Buy it here!
Website: http://sorchamowbray.com
Twitter: http://twitter.com/sorchamowbray
Facebook: http://www.facebook.com/sorchamowbray
at 3:01 AM

Hmmm - my Decadent indulgence? French Onion soup with sourdough bread at panera bread. I know, it's pathetic, but I live in the UK so I don't get to have it very often and I just adore it. And yes, we do have it here but it's not the same. I think I'm addicted. And the fact that I have the soup in the heat of Florida says a lot!

Sounds yummy to me! I once got a burger from McDonald's in London. Not. The. Same. So I totally hear you on that score. :) Thanks for stopping by!

Mine is chocolate! Never can have too much chocolate. LOL. Your book sounds really wonderful. The cover is so pretty.
Sue B
katsrus(at)gmail(dot)com

It is said we learn something new everyday. Well, I just learned a lot from your post. Thank you, Sorcha!

My decadent indulgence is books, but food-wise, it would have to be Lindor white chocolate truffles.

Chocolate is always yummy! Thanks @katsrus & Jessica for stopping by. :D

Even though I'm probably too late for the giveaway...my decadent indulgence is purfume and of course romance novels.

Your book sounds yummy. :)
thanks!
teresajb@swbell.net