by Wendy Burke
It's amazing what companies think will sell! But then again, during this time of the year, novelty gifts are almost more endearing than a nice multi-carat diamond necklace in a velvet box or a dusty silver Aston Martin Vanquish in your driveway.

My 'real job' is that of a TV newsroom assignment manager and recently a news release popped into my 'inbox.' Don't know if this company is absolutely serious or if the owners think this is the perfect time to unveil this product, but undoubtedly it will sell.  So, don't be surprised if you see some BACON LUBE in your naughty stocking this Christmas.
Now, I'm not endorsing this product, I've not tried it, and I don't believe I will, but darn it, it sure does lend itself to finding a way into a 1NightStand story!
Baconlube comes from the porky and quirky company of J & D Foods in Seattle, Washington. I've had their BaconPop (popcorn)--it was marginal. Among the company's items-bacon-flavored lip balm, bacon salt, baconnaise, bacon gravy, bacon croutons and the odd man out, ketchup salt. 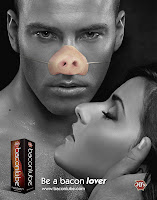 The news release touts--'You’ve always been a lover of bacon.  Now you can be a bacon lover with baconlube, the world’s first bacon-flavored massage oil and personal lubricant.  No more horrifying bedroom experiments with bacon grease just hot oily bacon-y good times.'
You know, using animal fat as a personal lubricant never really struck me as something I would do...but...J & D's release goes on to say - '...we have one small admission to make - baconlube began as an elaborate April Fool's prank and was never intended to be a real product.  When the joke ended, the emails kept coming and coming and coming.  People harassed us via email, in public and in highly inappropriate ways (thanks for that).  The baconlube waiting list grew to thousands of people!  Expectations were built, we had to deliver.' 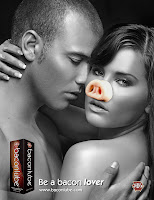 Thankfully, J & D, '...make no judgments about why people want this or what they want to do with it, but baconlube is here, it's real and available now just in time for the holidays.Supplies are very limited.  Keep It Sizzlin'.'
On the up and up, I did not get a sample of baconlube nor am I being paid or endorsing this product. At the same time, You're Welcome! that I have given you the idea for the best novelty Christmas gift ever!
Keep it slippery, friends!

Wendy currently has two works on the Decadent Publishing shelves, is in the final stages of a a third (Haste Ye Back) and is in the process of writing 274 more which she hopes DP will like! Find her on Facebook, Twitter and lurking about the internet. When not playing with the people in her head, she has a full-time job in television news and a silly life with her way-too-cute chef husband and two furry feline kids in the Great Lakes region of the Midwest.
at 3:01 AM

ROFL.
Wow what will they come up with next? Or should I ask that question? Hoo boy. As a teenager I worked on the grill at McDonnalds and always smelled like hamburgers. It was so damned hard to scrub the smell out of my skin. I hated it. My boyfriend liked it. Lol.
Thanks for sharing the breaking news.
Think I'll pass too.

I know you're ordering some right now, Olivia! :)