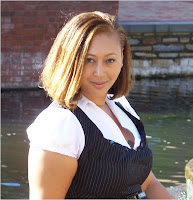 Tell us about your favorite character from your books.
I think one of my favorite characters from my books is Isabella from Soul Catcher. Bell seems like a strong, aggressive female that everyone wish they could just slap, but underneath she has a softer side. She wants to be loved, but stays true to her demon self and toys with the one man/demon she thinks will be around forever. When Jacque falls for another woman, a human woman at that, it devastates her. Nothing is worse than the fury of a woman scorned. I have a soft spot for her. Unfortunately, I know so much more about Bell than my readers right now. Hopefully, they’ll get to know her better in the future.
Do you believe in ghosts?
I’m from Louisiana. Of course I believe in ghosts. I tend to only write about the supernatural. I stay away from it in real life. I don’t like to go on ghost tours or to haunted houses. Strange things both living and dead seem to be attracted to me. I stay away from psychics. Not that I think these things are bad, but I’m not willing to play with the undead or unknown and risk tilting the balance of nature.
What is the hardest part of writing your books?
Time… Finding time to writing is the hardest part of writing my books right now. My day job is demanding. I work anywhere from 10 – 12 hours a day. The job takes a lot out of me mentally. Therefore, when I get home I’m exhausted and writing may go to the back burning. On top of the job, I’m building a house, preparing to move, taking care of my family, and all the other things that come on a day-to-day basis.
What do you think makes a good story?
I need a story where the hero and heroine compliments one another. I want them to have an identity outside of the relationship. I also want a secondary plot that draws me into the lives of the other characters in the book.
Do you use a pen name? If so, how did you come up with it?
Yes. Vivi Dumas is a pen name. I came up with it because Vivi is close to my true name and I love The Count of Monte Cristo by Alexander Dumas. Plus it had a French flavor, which suit my stories which usually take place in New Orleans.
How do you develop your plots and your characters? Do you use any set formula?
My characters and plots usually unfold as I write. The characters are very vivid in my mind. I know their stories and who they are. I’ve learned this method of writing is a lot of work when you go back to edit. I’ve decided I need to really understand the goals, motivation, and conflict of the characters before I start writing.
On my current WIP, I took the time to really think about the world building beforehand. I believe I’ll come to a balance of some planning in the forefront and then letting the character guide me through the basic structure to reveal their true stories.
What book are you reading now?
Right now, I’m reading Wicked Lovely a YA and just finished JR Ward’s Lover Unleashed.
What songs are most played on your mp3 player?
Anything Usher, Lady Antebellum, and Eminem. But that will change next weekJ It all depends on the mood.
Morning Person? Or Night Person? How do you know?
Definitely a night person. Although I’m awake at 6:00 AM most mornings, I don’t want to deal with people until around 9 or 10 AM. I usually stay up until 1 or 2 AM. I’m at my most creative at night. Been this way all my life.
What is the next big thing?
I’m working on two projects right now. I’m rewriting my first novel, which is a Urban Fantasy YA. I’m also working on the 2nd book in the DWD series. This is going to be Isabella’s book. I’m loving it. It’s a bit darker than Soul Catcher because the hero and heroine are much darker and forced together by the Devil himself. But most of the wonderful characters from the first book will be making an appearance in this one.

Top supermodel, Angel Dias, lives the life of the rich and fabulous, until a heinous car accident mars her face. After thirteen surgeries and losing everything she deemed important, she seeks out the dark forces to salvage her life and decides to conjure the Devil for help, making a deal to recover her beauty. In exchange for his help, Lucifer forces her to hunt supernatural renegades, which have eluded the pits of Hell. In her quest to find beauty and get out of her contract with Lucifer, Angel stumbles upon love in the arms of a demon.
Commander of the Legions and an Underworld Demon, Jacque Toussant, takes a field commission to escape the madness of a failed relationship and prove himself worthy of his demon heritage. Jacque is content with his existence as a field soldier until Lucifer gives him a special assignment to oversee a new trainee, a supermodel nonetheless. Humans hold low appeal for Jacque, especially the females. That is until he meets Angel. Jacque risks everything, including his life, to find a way to break Angel’s deal with Lucifer.

Soul Catcher Excerpt
The growls and snarls inched closer. Angel’s feet pounded the dirt, kicking up red dust all around her. The barren trees provided little sanctuary. Her heart and mind raced as she tried to think of her next move. The skies darkened above and thunder rumbled through the thick air. The air smelled of dampness.
How long had she been running? It seemed hours. Other than Noel, the other cadets were long gone ahead of her. Being human sucked when it came to supernatural warfare, but she refused to give up. Every day the class waited, watched, wondering when she was going to quit. Two of the others had already dropped out, and they were demons.
Noel passed Angel on the left, ducking through the low branches of the charred trees, cackling as he passed. Angel picked up her speed, her calves cramping and an ache developing in her side. She wanted to stop. Stopping meant quitting. Quitting was not an option. The hellish howls closed in on her.
Angel glanced over her shoulder and caught sight of one of the ugly beasts. It’s long, rounded snout protruded from an enlarged head. Red eyes peered through the charred trees, scanning the landscape. A ridge of ivory spikes ran down the monster’s back extending from each vertebra. The dog-like fiend pounded through the forest on powerful, muscular legs, which carried its compact body. Out running them wasn’t going to work. She had to come up with another plan. Scanning the terrain in front of her, the only place to go was up. The trees disappeared into the grey clouds. If she could climb high enough, maybe she could wait them out. Or maybe they would go find another victim.
She lunged for the closest branch, leveraged her foot on the tree trunk, and boosted herself off the ground. It took all her strength to hoist her weight into the tree. As she reached for the second branch, three hounds pounced on the trunk, clawing at her dangling foot. The dark-haired one’s razor sharp teeth nipped Angel’s ankle. Stretching for the next limb, she stared down just in time to see the dagger like claws of the reddish colored beast rip into her calf.
Scurrying up the tree, she climbed higher until she was out of reach of the animals. Angel perched on one of the higher limbs, praying it could hold her weight. She clung to the trunk and observed the creatures clawing the burnt bark off the tree. Slowly, deliberately, a hound dug its sharp claws into the tree, using them like spikes, and began to maneuver its way to her.
Tremors quivered through Angel’s body, almost causing her to lose her grip and fall. Thunder clapped and lightning flashed. Ominous clouds gathered overhead, growing darker as the hound drew nearer. The animal swiped at Angel’s bleeding leg, barely missing as she jerked it onto the branch she sat on. Electricity hummed in the air. Angel felt the energy gathering about her, a strange, eerie sensation floating on top of her skin.
The hound’s red eyes glowed as it stretched towards Angel, drooling from its mouth and snarling. Angel stood on the limb, grabbing for the one above her. As she pulled on the branch, it snapped in her hand. She wrapped her arms around the trunk to keep from falling. The beast snagged her ankle, jerking its head, trying to yank her from her perch. Lightning flashed through the sky, hitting its target—Angel.
Angel closed her eyes as the bolt of electricity hit. The pain she expected never came. Her body absorbed the energy and channeled it to the beast attached to her ankle. The smell of burning fur wafted to Angel’s nostrils. The hound fell to the ground with a thud. The two other monsters sniffed its cohort and growled up at her. Angel redirected the remaining energy to the creatures below with deadly accuracy.

Great interview, Vivi! It's a demanding life when you try to juggle a full-time job along with writing. I do the same. Midnight comes around so quickly. lol

All the best with book two in the DWD series. It sounds fascinating.

Nice excerpt! I've got to put that on my list!

I tell you- I could never write for any length of time when I worked full-time. I'm so thankful I stay home now.
Keep plugging away at it though. The excerpt is fantastic!

Good interview. I always enjoy learning about other authors and how they work. Best of luck with your writing and your re-writing.

Thanks for stopping by everyone. I was so busy I forgot I was supposed to be here yesterday.