In 2004, my husband was offered a job at Toyota. It sounded great. Wonderful money, competitive benefits. But it was in Kentucky. Four hours away from all my family. Literally, my mother lived five minutes away from us. It was traumatic to even think about leaving.
We decided that before we packed up the family and moved so far away, hubby should check it out first. So, he went down, rented an apartment, and live in Kentucky during the week, then came home on the weekends to see us. After a year and a half, we decided that it was time to move. We had been apart a long time, and things needed to change.
So, thank goodness for the internet. We found a chunk of land that we

liked the look of, and it was within driving distance but out of all the congestion of the city. We bought the land and moved down. The house wasn’t what we wanted, but it would suit us for a little while.
We were very hopeful of what was to come. Until we met our neighbors.
The first lady we ran into was an older lady that lived adjoining the far end of our land. The very first thing out of her mouth was, ‘You all are Buckeyes?’ as if that was bad. I didn’t realize that we had moved to a state that was as passionate about their Cats as we were about our Bucks.
A neighbor farmer was running cattle on the land, and we let him for several more months, but we finally asked him to remove them because they were tearing up fence. He didn’t appreciate that.
We also discovered a pot cultivation field hidden down in our woods. I’m sure somebody was upset they lost it.
Literally, I chased people off my land a dozen times the first year. Armed, of course. People actually wanted to argue with me that they had permission from the owner. Helloooo, I am the new owner. I slowly realized that there was a cultural reluctance to admit anything to a woman.
It was also an eye opening experience going into a SMOKING grocery store. You walk through the aisles and step on cigarette butts. The bread  tastes like ash.  For a lifelong non-smoker, it was a real shock.
For a long time, I was really set on not liking Kentucky, and I looked at everything negatively. I think because it was so different, and so far away from my family. Mom would call, and I could hear the sadness in her voice because she missed us.
But that distance also created an appreciation for the state I was in. I couldn’t run home every weekend, so I was forced to find other things in our area. Like the 5000 acre wildlife preserve literally a half mile away.  And the drive-in theater in Paris, twenty minutes away.  The operating soda counter in a department store, also in Paris.
Then there were the horses. 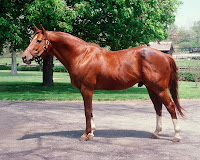 My gosh, for a horse crazy girl like I was, Kentucky turned into paradise. There were miles upon miles of black plank fence, and barns that I would be proud to live in. There are four public racetracks within an hour of me, and too many private ones to count. Ads in the paper for broodmare grooms, spindly legged foals every spring.  The list has no end.
I finally realized I was in horse heaven.
So, writing Second Time Around was easy, when I had so much wonderful material. And with my previous law enforcement experience, the two merged perfectly.
I love Kentucky, now. Well, for the most part anyway. The smoke filled grocery store is still a turnoff, but it gives me a reason to range wider and find new treasures.
at 12:01 AM

I remember last year, traveling to Minnesotta and there it was...a billboard advertising the chance to shoot an uzi at a shooting range. A babe in a halter top and shorts holding said uzi.

Check number one that I wasn't in California anymore!

Next, as we traveled to Columbus, OH... The smoking in restaurants. Check number two that I wasn't in California anymore!

Then the bible school placemats at McDonalds.

Traveling is interesting! I don't know how I would have handled so many 'trespassers'...but everywhere has it's charm!

We actually have all of those. Slide through here some day! Thanks for commenting.

It's hard getting used to new places, so many different things,little things that you would think wouldn't matter. Do.

I've lived in a lot of states,and still find Texas most comfortable for me. One friend I met from California said to me, "don't you just hate all those high wire electirical posts and telephone poles they are so ugly."


I thought to myself, don't pay them any attention. They aren't there for looks. Why would i want to look at them. They are there for the repairman so he doesn't have to dig up New York City to fix something.

We got a gazillion pickup trucks, and rednecks in them, and beer sells like water here, and the smokers well, they are dying out the hard way.

I love Texas for the trees. I also love Arizonia, but they don't have many trees.

I've never been to Texas, but I never imagined it as having very many trees. I guess I always picture desert for some reason. Sorry, Animal Planet Cops Houston has too much influence on me.
As for the rednecks and pick-up trucks and beer, it sounds like my kind of place.
Thanks for stopping in!

I can sympathize - I live in Spain and my family are all back in the UK. But you learn to appreciate the time you do get with them.
We also have a lot of armed people wandering over our land - it can be very unnerving.
The horsey heaven sounds wonderful!

Kentucky--yet another place I want to visit.
Your words echoed my own sentiments when I moved from Manitoba to British Columbia.
Those first couple of fews were very hard. My father-in-law who had made the move many years before me maintained, "The prairies are a fine place to come FROM." I've found the wisedom in his words.
Thank you for showing me your home. Now I know why Bill Munroe was inspired to make such sweet music.

Wow Nina! Spain? I bet you have some pretty country there too. I think you're further away from your family than I am mine.
I've kind of gotten used to being distant from them, and somedays I'm very glad with all the infighting that goes on, but it's especially hard when somebody's health is failing. My grandfather is having issues right now, and I would be at his house every day if I could to check on him.
Leanne, I don't know what BC is like. I've never been there. I think people are very adaptable, though, and there is something good about everywhere, you just have to look.
Actually, this time of year the good things about Kentucky are pretty much smacking you in the face. I've seen babies already, and looking out at my hill I can see the grass greening every day. Spring is my favorite time down here, and it's coming in hard.
Thanks for visiting.

Hi Jennifer,
I love your pictures...esp. the horses:)

Thank you very much. Actually, the sorrel is Secretariat, the famous race horse. His farm is also in Paris, just a little ways away from here, and it is where he's buried.

Although I'm entirely too blue to live in a red state, I'd love to see all those spring foals. I live in New Mexico in a very horsey community. Lots of adult horses (and goats, llamas, chickens, etc.), but not many baby horses.

Puppies and kittens are cute, but there's something about foals, all knobby-kneed and wobbly, that makes me go "Squeeeee!"

I know how difficult it is to be far away from family. When my daughter moved five hours away, we were all sad. It took some time for us to accept the change. We make it work and get to take mini vacations when we visit.
I enjoyed your post and the horses are beautiful.

Oh, P. I know. When I first moved down here, I used to drive for hours just looking at all the babies. The breeders try to time pregnancies so they are all fairly close together, and you will suddenly see fields full of them. Absolutely beautiful!
As for the smoking, the big chain stores don't allow it, but the small IGA in our town does. It's so nasty. I only go there if I absolutely have to. Ugh!
Kathleen, the one good thing is, my mother (the original homebody) learned to drive down here by herself. I was so proud of her! Now if Hubby and I plan a trip or something, she comes down to babysit. I love her for broadening her horizons like that for me.
Thanks for stopping.