For Better or Worse ~ Decadent Authors in the Spotlight 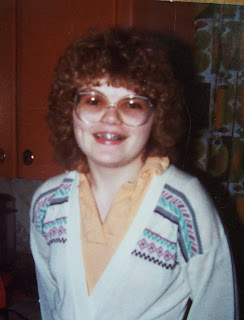 "The tin grin was in. My mom took this picture in 1981 when I was nineteen. I had braces for six years," says Leanne Dyck (author of The Sweater Curse). Leanne offers no explanation for the glasses or the hair, however. 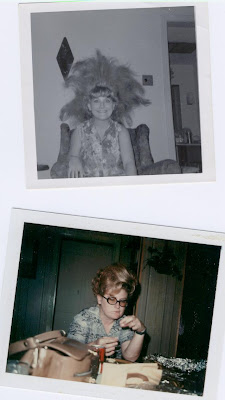 Rita Hestand - 1960s  "Me, the one is a picture of my hair ratted back in the late 60's, it is sticking out all over, the other is what it looked like when it was combed into a style.  My mother was a hairdresser and took both pics."

Kathleen Gallagher ~ "If I Could Turn Back Time", was released June 1, on my birthday. If Cher could wear the wild hairstyle, so could I. 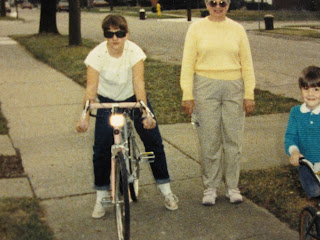 Ann Mayburn ~ late 80's. "Those giant dark glasses, that tough girl glare, I was hell on wheels! Pink and grey 10 speed wheels that is. On a walk...with my grandma and my little brother. Yep...I was a real bad ass." 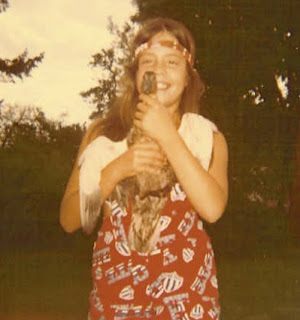 Valerie Mann ~ 1976, Denver, CO. Dig the groovy beaded headband and sexy hotpants (too bad the picture cut off the view of my legs). My mother made those duds for me - they said "VOTE" all over them.
My father and I came home and found a wild duck in the yard. Judging from the stranglehold I had on it, it's no wonder it flew away during the night.

Clare Dargin - late 90's. That was a meeting for my job a little over ten years ago.  And they were going over from table to table taking pix and I was, oh, I've been here all day... okay... <cheez!> now go away so we can finish and I can go home!! 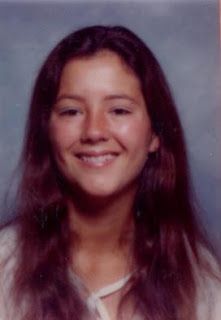 Maureen O. Betita
~ 1976. "I was 16 and this was my pic from my student body card. Oddly enough, I thought I was fat. Sigh. Man, I loved that shirt! And I often wore it with my light blue bell bottoms, painted with flowers on them... I still own them in my memory box." 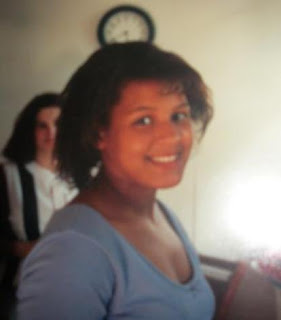 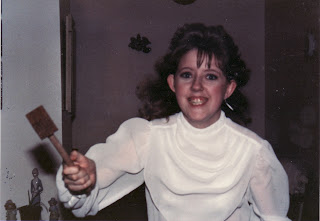 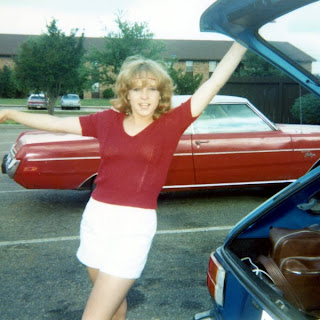 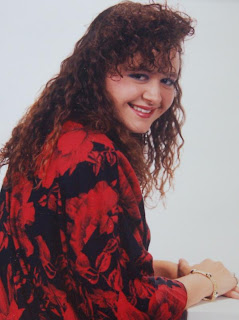 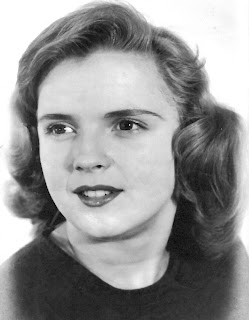 Jennifer Robins, Age 15
Jennifer always wanted to write even at an early age but couldn't find the needed time until she grew much older. Deena Remiel ~ A long time ago, in a land far away called Long Island, there lived a girl. There, she shed her sheltered world and came into her own as a college student for four years. This girl was captured in photograph in her second year, 1985. She partied hard, made great friends, and studied well.

AAwww, you're all so cute!

I look at my picture and think 'warrior'.
I agree everyone looks adorable. This was so much fun. Anyone for round two?

I think, this Tuesday on my blog (http://sweatercursed.blogspot.com)I'll post three pictures--before, during and after. So that you can see what I was waring against and how victorious I was. Good idea...?

Wow, looking at all the hairstyles is such a trip! Love all those curls and lifts!

This was so much fun. Love seeing how young everyone was. :D

Love all the do's.

You girls all look great! I'm sorry I didn't get a pic in on time.
Gracen, I had hair just like yours. I used to babysit for my cousin, who was a hairdresser. He would pay me in spiral perms. Yep, we were so cool. Not.

I can't believe I forgot this was going to be posted on Sunday! This was so much fun! I'm up for round 2...I just gotta find more photos or steal some from my mom. Or, as someone suggested, do "then/now" shots so folks can see how far we've come. lol

JM, we were both WRONG for those spiral curls. My hair has a natural curl to it so what was I thinking? Obviously, I wasn't because all that perming solution fried my brain cells. ;-) My step-mom was a hairdresser, so we did lots of fun things to my hair that my mother just loooooved...NOT! LOL

*laughs and hugs Gray* Girl, you didn't look freaky at all! Now if you want me to show you my pizza face-slash-braces-slash pink and white polka dot shirt picture from junior high...THEN you would see horrid. LOL.

Oh, lawd, Night pink and white polka dots? I don't have to see that to know it was wrong. ;-) BUT I'm sure you didn't look as bad as you think you did! I never had braces and didn't have much acne, so I lucked out in those categories as a teen. I obviously missed any fashion sense God was handing out because that outfit was horrid too!! lol You should've seen the other pictures I had to pick from. I made a fashion statement alright! ;-)

*huggles Night* Thanks for checking us all out, girl! Love ya much.

My kids love looking at old pics of their mom and laughing at how "gay" I looked!! Very brave of you all!

I love it! You guys have guts posting flash back from the past.