A Wild and Wonderful Gift 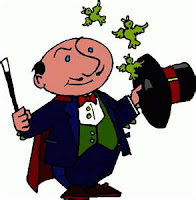 I tried to think of something to write about for Wild Wednesday, but I could not come up with an idea. I recently redecorated my home and packed away some old boxes in the basement. I came across some of my old memorabilia as I sifted through the items. There it was! The idea I was looking for was right in front of me. It was my Father’s magic wand.


Growing up with my family was anything but ordinary. My father was a professional magician and he taught me all of his tricks. Our house looked like everyone else’s, but when my friends came over, my Dad would pull quarters out of their ears or make a dove appear out of nowhere. You could say I had a wild and fun childhood.

When I was in grammar school, at recess, my Father would entertain my classmates when he dropped off my lunch bag. My friends would gather in a circle on the playground while he amazed them by making a simple red ball disappear in thin air by using his wand. The kids would beg me to tell them how the tricks were done, but I never gave away his secrets. The mystical appeal would have been broken if I let them in on the inside information.

My Father kept all of his spectacular illusions in a secluded area of the house. We had two small 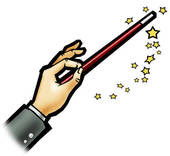 rooms that he converted into his domain. He painted the inside gold and hung a long black velvet curtain to separate the work space from his office. A large birdcage sat in the corner where four magnificent doves sat waiting for their master. My Father spent hours trying to come up with new ideas for his act. He loved to see his audiences eyes light up, especially the children, when he amazed them during each performance.

Dad liked ghost stories too. When he was a young boy, he pulled a prank on his neighbors by using cloths and sticks to mimic a spirit’s appearance. That was his first attempt to thrill an audience and it must have worked. The people in town talked about it for years.

I was proud to be the magicians little helper and I was usually the first one to get a glimpse of each new feat. My favorite prop was a huge round hoop that was covered with silver glitter. It was used to demonstrate the levitation trick where a woman floated in the air. My older sister assisted with that one, since I wasn’t tall enough to wear the long flowing shirt.

I treasure the times I spent assisting my Father perform. I must have been bitten by the magic bug myself. Although I don’t see myself in front of an audience, I like to add a magical element to my stories. I believe his influence had a lot to do with my interest in writing and my imagination.

Magic is all around us, if you open your eyes to it. Thanks Dad.

Kathleen is the author of Echoes At Dawn, soon to be released at Decadent Publishing!

That is a fabulous story! What a fun childhood to remember and so worthy of a book itself!

Thanks so much, Maureen. It was a lot of fun. Why didn't I think of that? I mean about a book.

What a fun childhood, Kathleen!!! Now...tell me how he does all those tricks! ;-)

I agree with Maureen, this is book worthy. I wish you all the success you can tolerate and then some more! =D

Kathleen sounds like you had a great childhood growing up with such a talented father. treasusre those memories forever.

Echoing others words--what a fun childhood! Thank you for giving us a glimpse. I agree about the book idea--it would be a captivating one.

There's a wonderful book I read some years ago...by Elizabeth Arthur. A sort of childhool memoir about her summers at camp.
I could so see you and your family in a similiar sort of book. Hers was called "Looking for the Klondike Stone" and was so memorable.

Yes, you should consider writing a book about the magic of your family and what it taught you!

Thanks for the suggestion, Maureen. I really appreciate it. I'll check it out. You certainly gave me something to think about.

Wow, Kathleen, that's a very interesting childhood. My dad was into restoring all kinds of cars and motorcycles and we never knew, when rain kept him off his construction job, what he would pick us up in. I guess sometimes it's only the embarrassing parent stuff we remember, when they actually did some bright and shiny things that gave us major kid status!

What a neat story about your dad. Sounds like you had a very fun childhood. Isn't there a very famous magician named Gallagher? Is he your father?

I love this story. Thanks so much for sharing, Kathleen!

My hubs name is Gallagher. lol

I would have never written this story if I didn't come across his wand. I saved only a few items from his magic box. I wish I had more of his things hanging around.

I'd put that magic wand somewhere you can see it all time...remind you that you make your own magic... ;-)

Sweet post, Kathleen. What a great story to carry with you.

Thank you for your encouragement, Maureen. I will do just that.

Becca, I'm glad you like it. Thanks so much!