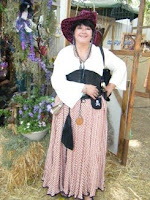 I do like to dress up. In costume. At a variety of occasions. I’ve been to Renaissance Faires, where I admit my tastes run to the peasant, skirt, blouse, bustier... I just am not one for sewing and dressing like a noble at a RenFaire, takes more than making found pieces work for a character.

I also go to Pirate Festivals, where I swash my buckle and oogle blades, try on hats and 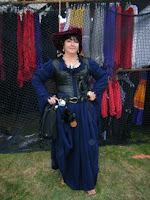 ‘arrrrr’ with the best of them. When I do spend money on accurate clothing, it will always be toward a pirate bent. The rest is found, or reincarnated costumes.

For example, this is me at the Romantic Times Booklovers Convention in Orlando, 2009. I loved this costume and thought it wonderfully inventive. Alas, it was lost on most at the Fairy Ball because they didn’t announce character names. This is a recycled costume from years attending Dr. Who conventions. From Romanadvoratrelundar to The Fairy Dogmother. Because all dogs deserve a fairy dogmother. (Yes, she was a Time Lord character from the season of the Fourth Doctor, Tom Baker.)

This year, 2010, I attended the RWA convention, again in

Orlando, and a friend accompanied me to the Futuristic, Fantasy and Paranormal Prism Award Banquet. Where the theme was steampunk. Now, I hadn’t really had a chance to put together a ‘period’ costume. But! I’d recently discovered a pair of overalls I used to wear regularly to the scifi/fantasy cons and I realized… “Eureka! I can be an air ship mechanic!” And viola, a visit to my local army/navy surplus store, a set of costume goggles and a good utility belt and I had my mech.

Most everything I costume is from found items. I find if one looks through the racks at most anywhere, one will find the occasional perfect bit that can be turned and twisted into…if not a perfect costume…into costume wear. And it’s fun to say, “Oh, this jacket? Lane Bryant! This skirt? Target! Hat? Cost Plus!”

So looking forward to RT’s Fairy Ball in 2011. Going to turn my wedding dress into something spectacular, not that it wasn’t to begin with. But in April? Look for me. I’ll be in the crocheted, full length dress…with corset, wings, hoop slip and if I can figure out how to tie it in, some tentacles!

What wonderful costumes you have! ANd everyone of them, I bet, suits the many facets of your personality. Thanks for sharing, matey!

I love all of these costumes. I am a horrible costume-er. I despise Halloween and on the rare occasion you find me in costume, it's general as my role of "SUPER MOM" complete with diaper bag, sippy cup, nursing cape and change of clothes.

I would love to attend a conference again soon. I need to wait until the littlest is a little more able to fend for himself but maybe Nationals this year. We'll see. If not every day, hopefully I can manage to make it up for the book signing.

I can only imagine what your closet must look like! And just how many bags do you need to carry when you go to these conventions?

I have enough problems with dressing myself everyday. Costumes are way beyond me. But I do envy those people who have the flair and desire.

What a CLOTHING ARTIST you are! I'm so impressed with your lovely costumes. I'd never be able to put together such creations. Great job!

Argh, Pirate Maureen! :) I'm so jealous that you're thinking ahead - I'll be planning my outfits the week before RT.

Deena - I do try to costume in a manner that suits who I am. One of the reasons you'll never see me at the RenFaire as a noble!

Marnee - But I'm sure you do super Mommy very well! And I could see that done with flair and with stuff you already have!

Which is the secret to my various outfits!

Maeve, I bet if I had an hour in your closets I'd find things to put together that would work as a costume! I have a talent! Thanks for stopping by!

Riley, it's all in the planning! And keeping it simple!

Just because the Victoria Secret wings are six feet across, doesn't mean yours have to be. The wings for the Fairy Dogmother are less than a foot across!

What fun!
When I worked in day cares working with perschool half the fun was designing my Hallowe'en custom. It became more challenging when I cared for infants. Without wig--it's Leanne. With wig--Leanne disappears and some monster has replaced her.
Thank you for inspiring me to recall those lovely days.

I've never tried the wig switcheroo, but I'd like to! I find a hat or a mask can help me shift into character. And oddly enough...shoes.

Though the shoes only work if I'm walking about!

Aww - I want to go to a pirate festival.
The costumes are brilliant - looks so much fun!

I love your flair for fashion. I have no idea what to wear to the Faery Ball. Where to begin?

I would l ove to go to a cotume ball, never been and my one dreamis to go to the RT conference one year.

Tell Jimmy hello for me and enjoy,you look divine in those get-ups. So much imagination. I wouldn't know where to begin. But if I ever do go, I'll holler at you for some advice on hwere to go to find something.

Kathleen - Well, this year the them is the Venetian masked ball, so I'd start with a real rad mask. If you didn't find one when Halloween was around, your local craft store has blanks and haul out the glue gun, some pretty paper, rhinestones, glitter, beads...and have party!

Or cover it with paper mache. I'm thinking of that route since I want to add some tentacles to mine. ;-)

Rita, give me an hour in your closet and a visit to Goodwill or the local mall and we'd have you set to go. I swear, I have an eye for making something costume-y from found stuff!

Hope you make it to RT and can say hi to Jimmy in person! ;-)

Nina! I missed you earlier, sorry! Pirate festivals are a total blast. All the 'arrring' going on, the kids wandering around so excited...most I've been to make a real effort to entertain the tykes, from special shows to treasure hunts.

And the music at the pirate festivals is a blast. I'll never forget watching Captain Bogg and Salty strike up the band and the children flooded the area in front of the stage, jumping and dancing!

Not there there ain't a fair amount of adult stuff going on! The Kraken's Mirror begins at one Pirate Festival and ends at another!

Maureen, thanks for the tips. I will have to try online. I'm awful with a glue gun. I struggle sewing on a button.

Costumes rock. I usually make them for other people though. The year my hubby was Mr. Bill and another time that he was the Church Lady both rocked. I love dressing up though probably from years in high school and college theater. Your costumes are great.

Becca - My sis used to make some rocking costumes for her kids. One year a nephew was a bag of M&M's! I never did explore theater in high school or college. I'm late to the drama nerd stuff! Thanks for stopping by!

Can't wait to see what you do with your wedding dress for RT :)

I'm plotting on how to make it fantabulous all the time! Thanks for coming by Celeste!