It’s the day before, so I’m thankful for… 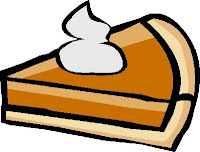 (God, that sounds so much like ‘old dogs, children and watermelon wine!’…okay, not really.)

So, now you’re saying, “What do big kids, Jerry Springer and pie have to do with one another?’

I always say I don’t have many friends; most people who fall into that category are much too close and too important to have that minor moniker. Those people, at one time ‘friends,’ have become the best kind of family to me – the kind I can completely be myself with. You know, the ones who don’t come in through the front door, but the garage. The ones who will happily sit in their jammies with you all day and drink beer in front of the fireplace and discuss everything and nothing. Ones who know your house, so when they visit they’re not ‘high maintenance.’ Ones who are easy to travel with.

From my own experience, the travel part doesn’t apply to most ‘blood relation’...ahem.

So, back to kids, Springer and pie.

Hard to believe it’s nearly ten years ago now – a trip to Disney World. Sure it’s great with little kids, the ‘oohs and ahhs’ of all those primary colors and toddlers screaming like Banshees as Mickey or Minnie get close. Yes, those are the things lasting memories are made of.

Not in this house.

Memories are made when three forty-somethings and one fifty-something attempt to have an adult beverage in every country in Epcot. I think we were thrown out of Canada after commentary regarding just ‘what does a guy wear under his kilt?’ (The answer is actually ‘socks.’---now that I think about it, what the hell was a Scotsman doing in Canada playing a bagpipe anyway!?...lost, probably, lost.)

Yes, I’m thankful for the three Big Kids I experienced Disney with. Who can for

get brushing the chickens in the Animal Kingdom’s petting zoo – in blatant disregard of the ‘Please Don’t Brush the Chickens’ sign posted at the entrance? (And, I can tell you, brushing a chicken in 90-degree heat is no small undertaking!)

While we were having fun, we were also encouraging to our fellow guests. Like the woman, not using her inside voice, grousing loudly about her drenched condition as she exited the Kali River Rapids – at the time she was standing next to the sign which read, ‘You WILL get wet on this ride!’ I think the phrase from one of my cohorts was, ‘Lady, this is the HAPPIEST PLACE ON EARTH! Shut up already!’ Yes, very encouraging!

It was a great Kodak moment in the Magic Kingdom, waiting in the dark, in a large group for the train to other parts of the park. Sometimes, you just don’t know what will hit you --- like the little guy in the stroller puking on the back of your leg. You can tell by the way I’m chuckling, that wasn’t my leg, of course. 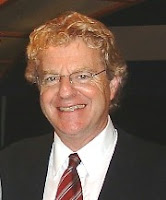 And, then there’s Jerry Springer.

Nothing says ‘Good Morning’ like a good stage fight on the Springer Show while eating whatever selection of pie is left in the Disney Institute condo’s fridge. (Also known as the ‘Disneytute’ in some circles, the accommodations have since been razed – I think it may have something to do with our stay there – really, you’re not supposed to invite the little white Ibis birds in for chips and dip? Funny, I saw no sign reading ‘Do not invite the wildlife into the condo.’) I’m still at a loss as to who is her babies’daddies – did he sleep with his fiancee’s grandmother – and why was a size 22 bloomer panty found in her thong drawer. Oh – the mysteries!

So to recap –for a week, four big kids, a refrigerator full of breakfast pie (and beer!), and Jerry Springer to kick off the morning prior to hitting the parks.

Was one of the best weeks of my life. And, I’m thankful for every second of it.

I’m thankful I live in the United States. I’m thankful there are people willing to protect me – a total stranger – whether on the other side of the world, or down the street. I’m thankful for more things than I could possibly count.

But maybe tomorrow, while I’m at work, I’ll start counting all those things. If I’m lucky, by this time next year, I’ll still not have tallied them all!

Happy Thanksgiving – especially to my husband (aka Ktn), and my dear ‘family,’ Bob & Jules. (Get the Cow cold – we’re comin’ home for Christmas!)

There is really something to be said for the philosophy that if the sign doesn't say you can do something, do it...

Chips for the ibis!

Make that can't do something...!

Wendy, I'd question whether or not you exaggerated some of this if I didn't KNOW you.

Happy Thanksgiving to you and yours.

Now I have Tom T. Hall playing in my head!!!! how lame am I that I knew the singer of Watermelon wine, LOL!
i wanna go to Disney with you. We could get so wasted in the World Showcase!

Thanks for the comments - it's always great to see who's reading my silly musings. Again, however, these stories are TRUE! Sad, isn't it? But, then again, if I didn't experience it, I'd have nothing to write about!

It's good to have real stories to tell. They make life more interesting.

Ahhh...I remember it well! Too bad you had to censor and keep it short! All the Mickey Mouse soap and toilet paper we shipped home, the co-pilot's directional hand signals, Knotazu, and the turkey drumsticks! Thanks for the memories!
Love, Jules