What Am I Supposed to Do With a Goose? 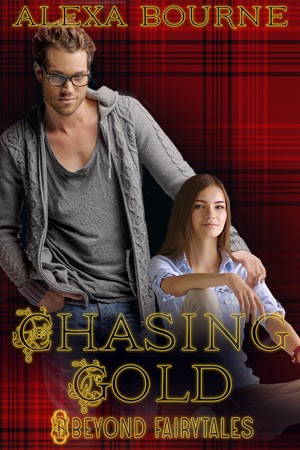 When I first contacted Decadent Publishing to get a fairy tale to “rewrite”, I was so excited. The concept of taking an age-old story and revising it to be a modern day romance of some type sounded very interesting. But then I got the email with what would be my fairy tale: The Golden Goose. Now, I was a fairy tale deprived child so I had no idea what this story was. On my next visit to Barnes & Noble, I peeked in a Grimm’s Fairy Tale book and read The Golden Goose.
Uh….How in the world could I make that particular story a romance?
I panicked a bit that I wouldn’t be able to do it, but Simon and Grace soon sprung to mind. Then once I got the okay to set the story in Scotland, the words fell onto the page almost quicker than I could type them.
This story is different than my other books. How? This is an adventure story. Yes, there is suspense in there, too, but this book is much more light-hearted. While searching the Highlands for a family heirloom, Grace and Simon will take you on a fun ride throughout the country that will hopefully make you smile…and fall in love with them as they fall in love with each other.
In the end, I think Chasing Gold is one of my best books yet. I hope you’ll agree!

Blurb:
Grace McKay spends most of her time alone trying to convince the world she’s strong enough and smart enough to become one of the best treasure hunters. According to the media, though, all she’s managed to prove is she’s a frigid, narrow-minded woman who doesn’t have a chance to succeed in her current hunt.
Simon Andrews is tired of being a glorified secretary for his family’s treasure hunting business.  As the youngest brother, he’s never had the chance to prove himself in the field, where his true interests lie.
When Grace’s uncle hires Simon on a whim to assist her with the search for an ancient family heirloom, he comes up against a woman determined to accomplish her goal without his—or anyone’s—help. But Simon, although captivated by her passion for her quest and her beauty, will not relinquish his chance to prove both to the client and his brothers that he has the family gift for finding valuables where others have failed.
Grace, frigid? Simon is sure the media met the wrong woman. He’s in danger of bursting into flames every time they are alone together. As they get closer to finding the heirloom, though, their growing passion for one another may distract them from the very real danger that threatens their lives and their possible future together. Whatever that might mean.

Excerpt:
After sipping her tea, she picked up another piece of pastry. Midway to her mouth, she stopped. A tall, thin man, glasses clinging to the end of his nose, strode through the doorway and scanned the room. A loose-fitting, faded T-shirt covered his chest, and khaki shorts hung on his hips. Kind of thin and bony for her liking, although the soft shade of ginger hair with a hint of blond in it grabbed her attention. It reminded her of her favorite movie star. Both hands were inside his pockets.
With a crooked grin, he walked straight up to her table. “Grace McKay?”
“Yes. Can I help you?”
He held out his long fingers. “I’m Simon Andrews.” He waited as if his name was supposed to mean something.
She didn’t shake his hand. “What can I do for you, Mr. Andrews?”
He lowered his arm. “Your uncle said you’d be helping me on my expedition here.” From his New England accent, he could only be American.
Uncle Thomas sent him? Of all the crappy things he’d done, this had to be the worst. Did he not believe in her enough to allow her to handle the job? She stood, gathering her papers. “My uncle was wrong. I don’t need any help with my expedition. Good-bye.” She shifted around him and started for the lobby. Studying her paperwork in her own room would suit her better.
“Ms. McKay, wait.” He grabbed her arm.
She froze. Every muscle tensed.
“I realize you want to help in the search, but your uncle hired me to—”
She tugged herself free. “I know what he hired you for, but I’m telling you, you’re fired.” As she stalked across the pub, many pairs of eyes stared at her, some wide in question, some narrowed. Who cared? She hadn’t done anything wrong.
“That’s not your call, sweetheart,” he said.
She jerked to a stop just inside the door and spun around, gritting her teeth. Andrews stood waiting, as cocky as could be, with his hands on his hips.
“First, I am not your sweetheart. Second, I don’t need a partner.”