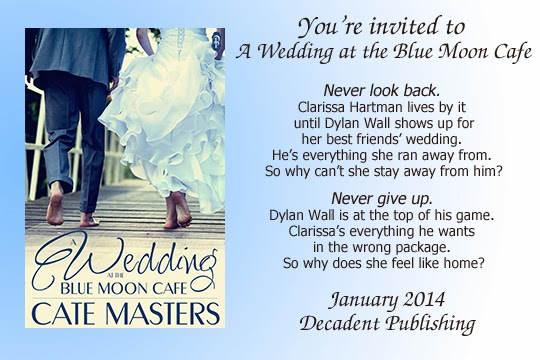 You’re invited to a wedding!

Not just any nuptials either. They're unique, none like you've attended before. You'll get to know the best man and maid of honor so well, they'll seem like dear old friends.
Where is this wedding? At The Blue Moon Cafė, of course. No limit on the number of guests - all are welcome!
When is it? This week! Decadent officially releases A Wedding at the Blue Moon Cafė today. I couldn’t be more thrilled if I were the bride.

It's a short trip to West Texas - just download your ticket from Amazon, Barnes and Noble, All Romance or direct from Decadent Publishing, and I’ll take you the funky little town of Marfa, home to cowboys and artists alike. A place where your soul can say ‘ahhh’ and your heart can soar to the stars—which, in Marfa, appear much closer and so much brighter that they hold Star Parties. Plus glider competitions, play festivals,  arts festivals, and another to celebrate their Mystery Lights. My kind of town!
So come on, what are you waiting for? I’d love to bring you there.

She pointed a packet of plastic utensils at him. “Amy saw in Jeff what no one else had—a guy who’d stifled his creative side, an unhappy soul stuck in a dead-end job.”

“Whoa, what fairy tale did you hear? He had a six-digit salary.” He slid the phone into his back pocket.
“Fairy tale? You think there has to be a fairy tale to have a happy ending?” She jabbed the utensils at him. “What did his salary matter if he hated getting up every morning? And going to work felt like a prison sentence?”
“You think he’s in a better place in his life here? Now that he has to cook and clean and wait on customers?”
“They’re more than customers to Jeff. He knows everyone in town. Cares about them.”
“Oh, come on.”
“When was the last time you cared about your work?” How could he invest his soul in anything he had to put a new face on to make it more palatable to the public? According to Jeff, Dylan’s successful PR firm spun new images for people, things. In Clarissa’s experience, if people or things needed new images, they probably didn’t deserve them.
“I….” His brow furrowed. He blinked, staring out at nothing.
Gotcha. “Yeah. That’s what I thought.” So why did it come as a relief that he might have a soul buried beneath that slick facade?
“I care. Plenty.”
“And I bet you can’t wait to get back.”
“I can’t.”
Lightning might have struck her nerves. “Good.” She stomped around the booth.
“Why do you hate me so much?” His voice drifted through the flimsy canvas.
“You’re everything I ran away from.”
A pause. “Stability? Success?”
Smart ass. “Shallow, egotistical, so focused on work you’re missing out on life.”
“I miss nothing.”
“You’re so blind, you don’t even see what you’re missing.” Maybe if she took him to see the Marfa Lights, he’d understand. Appreciate more than what he could grasp using only his hands.
“Oh, and I suppose if I gardened to get in touch with nature, maybe got a few tattoos to show how tough I am—”
Anger sizzled through her blood stream. “You have no clue what you’re talking about.”
“Enlighten me.” He reached for the feather on her shoulder. “Why’d you get this one?”
His touch sent a jolt through her and she shrugged away his finger. “Don’t.”
“Just asking. Don’t shoot the inquisitor.”
“Then don’t poke your inquisition where it doesn’t belong. And nobody uses words like inquisitor.”
He made a goofy face. “Apparently, I do.”
“You’re an ass.”
“Don’t speak to the customers like that.” Facing the front of the booth, he smiled. “Good evening, how are you?”
She rushed to his side. “I wasn’t—there’s no one here.”
He grinned. “I’m here.”
Unfortunately. She slammed the box on the table. “If you think you can handle the crowds on your own for a minute, I’d like to go change.”
He gave her the once-over. “Why? You look great.”
Her breath billowed in her chest, and she restrained it from releasing as a screech.
He held up his hands in surrender. “I’m not trying to provoke you, merely stating the obvious.    But if you’d be more comfortable in something else, by all means. Go change.”
She leaned out and peered past the counter, up and down the street. Some people milling around, nothing crazy yet. “All right. I’ll be back in a few.”
“I’ll be here.” All sweetness, he smiled. “Waiting for you.”

Thanks Susan! This wedding's a little more realistic than romantic, lol.

I love the trailer, Cate!

grats on the new release, Cate! Adore your books, and can't wait to dig in to your latest contemporary.

Thanks for checking it out, Teri! :)

Aw, thanks JoAnne. Likewise! I need me some Calendar Men, lol.