Countdown to Christmas with Ms. Claus

Hello! Thanks for hosting me Daily Dose of Decadence and thanks for letting Deanna Wadsworth tell my story in her book MS. CLAUS’S LIST.
Let me introduce myself. I am Ms. Claus, but you can call me Frieda.
Some people mistake me for my twin brother’s wife. *gag* Nick and I run the North Pole, well.... actually Nick does more of the running this time of year which is probably why Jorge, our social media director, asked me to participate in his little Countdown to Christmas blog tour. Jorge said I can talk about whatever I want, so I thought I’d tell you all about the big bash I host on Christmas Eve.
No one is as libidinous as Nordic elves so I hold a contest to see which ones will get to spend that magical night with. Every name gets put on my List and the finalists get to audition live in front of all the other elves as soon as Nick leaves to deliver toys to all the brats—yeah, sorry I'm not the maternal type. Any elf can enter but only the best are chosen. Lately I happen to be on a cock kick. Sorry ladies! But with elves like Pip, Eric and Lars available, who can blame a gal?
Watching the three of them go out it was like a dream cum true!
Yes... I didn't spell that incorrectly, so don't edit me, Jorge.
Speaking of Lars, I believe his book comes out today—Fun & Games With Rudolph. I'm wondering what Rudy has to do with Lars’s story, but I have a feeling Nick has something to do with it. He's always up to something.I sure do hope Lars ends up with a happily ever after. He deserves is, even if some people think he’s a jerk. In truth, he’s a really great guy. But ever since I was with Lars he's been a bit different.
I can have that effect on people, making them identify their innermost desires so they can go after them. Sometimes it's as simple as being in line behind one of the elves in the Great Hall who doesn’t know what kind of cookie they want. I can just tap them on the shoulder and suddenly they know that they wanted snickerdoodles. Other times it's more complicated. Like this elf named Sarah. She had no idea she wanted to be tied up and spanked, until we spent a naked afternoon together. Now she's having a great Dom/sub relationship with her girlfriend Helga.
See? I’m a helper.
After Lars was with me he realized there was something missing in his life, too. Although he hasn't quite accepted it yet.... but it's coming. And hopefully it'll be all kinds of peanut buttery goodness.
Boy, that man tasted delicious!
Since today is all about Lars’s story—Fun & Games With Rudolph, I brought along an excerpt of his book to share, but before you read it, enter our Countdown to Christmas giveaway on this rafflecopter thingy. You can win a $20 Amazon gift card and the first Three Naughty North Pole Books....my book Ms. Claus' Wish, and one about my friends Pip and Erik in Pip's Boxing Day Wish and then the story about Nick and Jack Frost, A Gift for Santa. I had to skim that one. TMI!!!
Make sure you hit the next stop on the blog tour is at thenovelapproachreviews.com this coming Monday. Jack Frost himself will be blogging and you can enter to win the contest again!

Any ways, I’m off. I got places to go and elves to do, LOL. Merry Christmas, folks! I’ll catch ya later!

Blurb:
Lars is the sarcastic elf who runs Santa’s Mail Department and he follows the dating rule of “no repeats”. But lately he's been having a romantic textlationship with another elf, via the dating app Elf4Elf. When his cyber boyfriend goes AWOL after a misunderstanding, Lars realizes too late that there is more to life than sex, work, and cookies.
On Christmas Eve, Santa asks Lars to personally deliver a gift to Rudolph—a former reindeer handler who left the North Pole because of a misunderstanding. Rudolph lives on the secluded Sugar Plum Ridge and the only way to get there is by sleigh. Lars just can’t get a break!
When a sudden blizzard forces the two elves to hole up in Rudolph's cabin, will they find a way to make their own fun and games or will one surprise ruin it all?
One thing is certain: after this night, they both will believe in the magic of the Naughty North Pole!
EXCERPT”
“What were you thinking?” my rescuer growled as he put his sword away. “These damn sleigh bells are like painting a big target on your back that says ‘come eat me.’”
His crusty demeanor and bad temper irked me. “Well, how in the name of Christmas was I supposed to know that I would get attacked by a yeti?”
“Never mind,” he said with a surly grunt. “Get over here.”
Tamping down my frustrated tears—I’d almost been killed and this guy was scolding me like I was a wayward child—I joined him, having no idea how he intended to free the animals when they were thrashing about, tangling themselves even worse.
The warrior removed his gloves. To my shock, his hands appeared normal, no claws or magic sparks or anything. Without fear of the beasts or their projectile antlers, he placed one hand on each reindeer, whispering words I didn’t understand. The soothing melody of them made me think he might be speaking the ancient language of the Elven races, but I had no idea what he said.
Instantly, the beasts calmed.
I stared in shock, my adrenaline still pumping. “How did you—?”
Eyes that had first appeared to be glowing stared out from above the balaclava covering his face. Snowflakes sparkled atop heavy lashes and the slight red in his brown irises indicated he was not a god, but rather a Dökkálfar.
“No time for explanation, my young elf,” he said. “We have to get them free.”
Nodding obediently, I agreed to help.
I assisted the best I could, holding the things he told me to hold while he did all the work. Lula was the first one loose and the second she realized it, she bolted and ran up the ridge.
“Wait!” I called after her.
“She’ll be fine,” the other elf told me. “Lula knows the way to my barn. Help me with Betty. She looks hurt.”
“Lula poked her with an antler.”
“Doesn’t surprise me with that one. Lula’s a real pistol.” I could hear the smile in his voice and, when it wasn’t yelling at me, it was a very pleasant, youthful sound, one that soothed me as much as it had the beasts. Though a dead yeti lay mere feet from me, I suddenly felt safe and protected beside this elf.
“Well, Betty,” he said to the reindeer. “Let’s see if ol’ Lula got you for real this time, or if you’re fit enough to walk.”
Thankfully, once he released the harnesses, she was able to stand. After he ran his big hands over her withers and legs, he buried his face against hers, whispering more of those ancient words. She huffed a few frosty breaths and tossed her head, as if nodding.
“What’s your name, elf?” he asked me.
“Lars.”
“Well, Lars, what say you and I let Betty carry us out of this place before any more yetis show up?”
“Sure,” I said, letting out a whoosh of breath. Curious, I stared at the big, fur-covered elf but already had my suspicions about the answer. “Who are you?”
“Name’s Rudolph.”

Deanna Wadsworth might be a bestselling erotica author, but she leads a pretty vanilla life in Ohio with her wonderful husband and a couple adorable cocker spaniels. She has been spinning tales and penning stories since childhood, and her first erotic novella was published in 2010. When she isn’t writing books or brainstorming with friends, you can find her making people gorgeous in a beauty salon. She loves music and dancing, and can often be seen hanging out on the sandbar in the muddy Maumee River or chilling with her hubby and a cocktail in their basement bar. In between all that fun, Deanna cherishes the quiet times when she can let her wildly active imagination have the full run of her mind. Her fascination with people and the interworkings of their relationships have always inspired her to write romance with spice and love without boundaries. 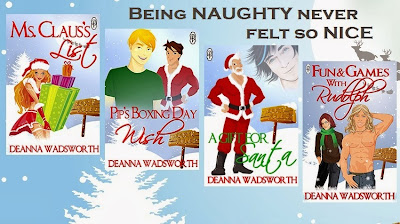