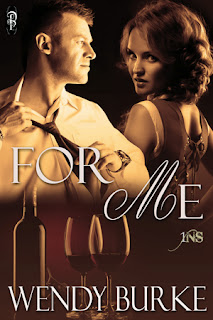 My latest Decadent Publishing story was released earlier this month. For Me is another 1NightStand.

Sure, it stands alone in its own right, but the fun (and sad) part of this story is that it’s one of six 1Night Stands I’ve penned with fellow DP author DeannaWadsworth. That’s the ‘fun’ part.

The sad part...we thought we’d write just six, three of hers and three of mine. Well, For Me is the last of that six. The ‘end of an era’ so to speak.

It all began with a little bear story DW had crafted – Bear it All. Then I had a wacky dream which woke me from a sound sleep with the first lines of what was to become The One He Chose. Then there was the discussion, "COOL—we need to write some stories with overlapping characters." (If I remember correctly, it took place at a corner table at a sports bar over a few beers. We got funny looks from those around us because of our exuberance, or was it when Deanna shouted, "You should totally kill the priest!") 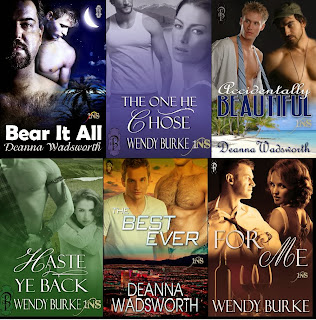 So, John in Bear it All became the brother of Grace in The One He Chose. Then DW swiped the concierge from my story and put him in Accidentally Beautiful. Martin was an college friend of Ian's from Haste Ye Back (originally a novella if not more, but in her encouraging way said, "It’ll never see the light of day, make it a 1Night Stand." Uh, thanks, I guess!).  Ian’s date, Bryn is neighbor to Jason from The Best Ever, and Abby in For Me is Jason’s sister.


That conversation began, “Wen, can I have Paul from Wise Men Say?’  So, it looks like there could be another sextet of stories in the works!

When not playing with the people in her head and cursing every situation which creates someone new up there, Wendy has a full time job behind the scenes in television, a part time job in radio, and even a 'parter' time job trying to keep her house clean. She shares her humble and perpetually dusty home with three furry children and her too-cute and ever-sarcastic chef husband in the lovely  suburbs of Corporal Klinger's home town. Zip her a note: wendyburke1994@bex.net.
at 3:00 AM