What do you mean I have to grow up? 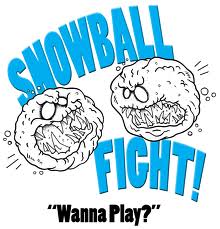 So its winter here, a little early but apparently Mother Nature didn’t get that memo. Three days ago it started with freezing rain that turned into a heavy snow storm which dumped 10 inches on us. The roads were a slick sheen of ice which was covered in heavy white snow. So you think as you’re driving, “no biggy, its just snow.” Until you get into a skid and find yourself spinning in circles. Not to mention having to chip and scrap the ice from your windshields and windows. Shovelling is a blast as well because not only is the snow extremely heavy, but trying to get a grip while pushing the snow off your driveway and sidewalk ends up making you look like you’re in a black and white film with Charlie Chaplin.  At least it’s not freezing cold, which we are famous for here in Saskatchewan, Canada.
For a several weeks now I’ve been nagging the hubster to clean out the garage. He always has a reason why he can’t or something always comes up. Then two weeks ago we bought a Jeep Grand Cherokee. We have a two car garage and three vehicles. One isn’t working and is in the process of being put up for sale for parts. So the non-working car is parked on one side of the driveway and (Because there was no room in the garage) one car is parked inside the garage. The new Jeep is parked in the driveway beside the non-working car. Are you following me? Good. Where are you going with this you may ask? Let me explain. 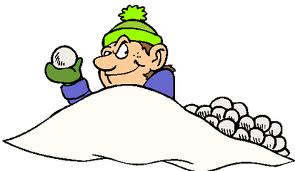 Remember that freezing rain and snow we got three days ago? Well, the Jeep is parked outside in the driveway. Guess what the hubster had to do when he got up to go to work? Yep, scrape ice and snow off of the jeep. He hasn’t had to do that for the past ten years so it’s not something he is thrilled about doing.  Inspiration strikes! Now is the perfect time to get him to clean out the garage. So I pose my solution to his problem of scraping snow and ice off the car and guess what? He likes it and…and, is willing to clean out the garage. YAY!!!!! 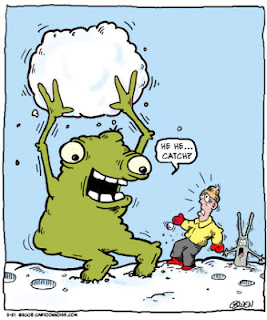 So what does all this have to do with not wanting to be a grown up?
My oldest son and youngest daughter are helping which is amazing in itself. And they didn’t even bitch about it. Color me shocked! Well cleaning a garage is fine and good, but add in fresh wet snow and what do you get? SNOWBALL FIGHT!!!!

My hubby and I like to joke around, play tricks and tease our kids. They inherited our sense of humour. Being around any of us Stewarts is putting your well being at risk. No one is safe…but I digress.
Anyway, I’m minding my own business, cleaning last minute stuff out of the garage when I feel a thunk on my back, then a cool trickle of snow dripping down my back. The sound of laughter from my oldest leads me to believe he is the culprit. I was right. Because I am no where near any snow at this time, I pick up a broken box and throw it at him. Of course he dodges and it misses him.

But I’m the sneaky kind. I wait…and wait…,and when they least expect, I pounce.

While I am waiting for my opportunity for revenge, he and my daughter decide to play toss the snowball at each other. My daughter, and how should I put this delicately…she’s gullible. My son is sneaky and of course, being the big brother, has to show his little sister he is still the best at everything. He convinces her he is just playing toss the snowball back and forth (remember the gullible daughter) and she gets ready to catch it.  With a wicked smile on his face, he tosses it…at her belly. She screams, he laughs and I simply shake my head. He convinces her he’ll play nice now (majorly gullible) and she gets ready to catch it. Once again, he tosses it and this time hits her in the chest. More laughter from my son, groans from my daughter. When will she learn. In the mean time my hubby is trudging through the snow trying to get the non-working car to run. No luck. I turn away, getting back to cleaning up the garage when once again, thunk, snow hits my back. My son is killing himself laughing. Ha ha, that is so funny.

We finish with the garage, everyone heads inside to warm up and to relax. Hubby and I run some errands. We get home and he parks the Jeep in the garage. He pats the steering wheel and explains to the vehicle that this is now its home. No more being out in the cold for his Jeep.  I laugh at him (I do that a lot) and head inside.

My son is in his room, playing on the computer, minding his own business. Now is the perfect time for revenge. I head outside, grab a huge handful of snow and entering the house, call out to my son.

“Chris, can you come here and help me with something?”

“I just need you to help me move something. It won’t take long.” Snicker.
He opens his bedroom door and BAM! The snowball I toss at him, hits him right in the face. I am killing myself laughing as melting snow drips off his beard. 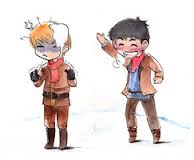 “Take that you little punk! You don’t mess with your Mamma!”

I got my revenge and had fun playing in the snow.

You've made me wish it was snowing here!! It was the other way round in our family - older sister tormented younger brother.

I always loved tormenting my little sister in the winter. I'm four years older than she is and I took advantage of it. LOL