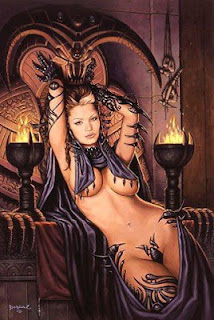 Suc·cu·bus
[suhk-yuh-buhs] noun, plural suc·cu·bi  [-bahy]
1. a demon in female form, said to have sexual intercourse with men in their sleep. Compare incubus ( def. 1 ) .
2. any demon or evil spirit.
3. a strumpet or prostitute.

I can’t help but think that stories of the succubus were yet another way to demonize any woman who sought her own sexual pleasure. Any woman who wants more than two pumps and a squirt in the dark must be possessed by an evil sperm sucking demon! We all know only women possessed by the devil would be interested in sexual satisfaction. ;)

And I have a feeling that this was also a frequent excuse used by cheating men. No, honey, I didn’t have the milkmaid in bed with me! It twaz that evil succubus draining my seed to make more demon children. I was helpless against her infernal powers. 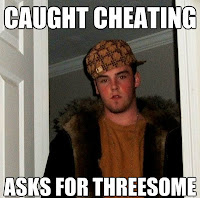 In ‘Princess of Lust’ we meet the queen of the succubus and she is far more than meets the eye. A strong, powerful character in her own right, she has a key role to play in Natalia’s present and future. I really don’t want to say anymore without giving away too much, but suffice to say the demoness has much to teach Natalia…and her men. 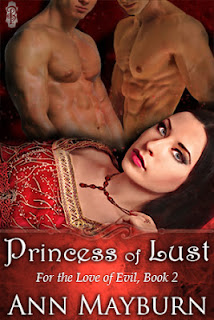 Princess of Lust is the second book in my ‘For the Love of Evil’ trilogy. Because it is a continuing story line you really, really need to read the first book ‘Daughter of Lust’ before losing yourself in the wicked pleasures of ‘Princess of Lust’. Lucky for you I’m giving away a copy of ‘Daughter of Lust’. Simply comment below and tell me what your favorite type of demon is. :D
at 3:00 AM

Favorite demon? Male, tall, dark hair and dark eyes - any type so long as he fits those criteria. I like bad boys but I don't like them to be TOO bad so a fallen angel who's now a demon might work.

Love em all if done right. Prefer my characters to have that bad side but with a streak of honor that comes through no matter how evil they are.

Favorite demon is a hawt dude with long hair, LOTS of muscles, rides a motorcycle and besides being a bad boy, he has a heart that is rarely seen!

Demon, tall, dark, ripped muscles, lots of ink, deep growly voice and only cares about his mate. He can be redeemed or trying to be a better demon if there is such a thing, but loves his true mate no matter what.

i want to read this. Looks good. I want the whole series soon..

My favorite demon is Deumos Nybbas. It is rumored that her green eyes make your heart pound and your mind sink into sin.

I'd love to read this book!