Preconceptions
by Maureen O. Betita
We all have them. I don’t care how much you deny it, you do. You know you do! I sometimes think preconceptions are wired into human DNA.
If a corner is dark, we tend to raise our awareness of danger…or…I suppose if you were a criminal, you assess the darkness as a suitable place to practice your craft.
Ah! There is a preconception! I mean, honestly…I think most modern crime takes place in broad daylight, across a boardroom.
Another preconception!
Yup, I’m full of them! 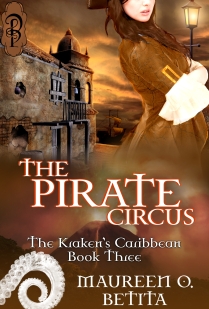 The same can be said of the hero in my new book, The Pirate Circus, available on February 3rd. Benjamin Silvestri is new resident in Tortuga, come from staid old England with his young son. He has definite presumptions of what being a pirate is all about and though he accepted help from his Uncle Silvestri, a well-known pirate, Ben has standards.
Of course, so does Janey, the bosun of The Cursed Quill. They’re just pirate standards!
Now, when these two meet and begin to debate his biases…amidst an attraction that neither expected…things get interesting!
Throw in a little boy longing for adventure and a young woman uncertain of her sexual identity and then the pirate circus arrives in town with a new admiral bent on evil… and BAMM! Things get dangerous!


Check out the blurb…
Bosun Janey knows who and what she is. A pirate.And a damned good one at that. Living a life of excitement, adventure, and sailing the seas of the Kraken’s Caribbean is enough for her. But when the Quill is stuck in dry dock, Janey is left to search for distraction along Tortuga’s waterfront. How does a pirate occupy herself? Certainly not by making friends with a six-year-old boy or mooning after the boy’s father. That’s not how a pirate behaves!
Widower Benjamin Silvestri arrived in Tortuga seeking a fresh start. At first, the pirate haven doesn’t seem like a safe sanctuary for second chances, but life is full of surprises. The sun breathes life into his little boy, and new freedoms help his errant niece embrace her true nature. And then there's Janey. A pirate and most unconventional woman, she stirs feelings in Benjamin that are far from proper.
But who’s to say what is proper in Tortuga? Before he and Janey can explore the possibilities, Benjamin's son and niece disappear onto the high seas. Together, the couple set out to rescue them—because only a loving father and a cut-throat pirate stand a chance against the dangers of The Pirate Circus.
-----

The Kraken’s Caribbean is the sort of place to challenge preconceptions and take delight in proving them wrong. It’s something I enjoy toying with as an author! Turning the world inside out and upside down is my specialty…


Now, what preconceptions can we dicker with today? To prepare for the release of The Pirate Circus, one lucky commenter will win a copy of the first book of the Kraken’s Caribbean series, The Kraken’s Mirror. (Though, if you already have it, I can make it one ya don’t have, because I’m like that!)
at 3:01 AM

I suppose we'd all like to think we're open-minded and willing to listen to ideas and other opinions. I'm fine with that so long as the opinions are the same as mine! LOL

I discovered this series last year and have it on my must read list. I look forward in reading The Pirate Circus.

I know we all have some preconceived notions about many things. You just need to temper them and try to be open minded
debby236 at gmail dot com

Barb - I always think it amusing to find the preconceptions we all live with and realize...it is just human nature! You work on the ones that hold you back and just shrug on the rest...

Tracey - I look forward to your reading also! ;-)

Debby - I try to laugh at myself with these things...

I have the preconcieved notion that I'm fine up to 4 drinks, but I'm really not. The number now is about 2...but I will continue to believe it is 4...some things I refuse to stay open minded about!

I love hearing about your Kraken series...it has opened my eyes to the fun with tenticals.

I've got that thing about how many drinks I can manage, too. Though I'm always fine with drinking...even over drinking. I tend to pass out before I get into any real trouble...

bahahah, I also have a notion of being able to spell...that's also false ;)