by Maureen O. Betita
Name? The Great Albino Kraken
Job? Protecting the world of the Kraken’s Caribbean
Sidejob? Cupid
Species? Cephalopod
Age? Not telling. I actually don’t remember. I’ve been here forever. I can barely recall swimming among those that eventually crawled upon the land… Times when the world was nothing but water, then it was ice… I grew and became aware. I’ve been injured, I’ve been female, I’ve been male…now, I am simply the Kraken.
My biographer, Maureen O. Betita, is honoring me this month with a contest. She has written books featuring my interactions with my humans of the Caribbean and now she is looking to hang me on a tree, which I understand is the custom for the month of December. 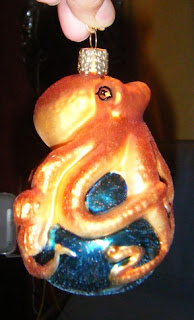 If you comment here you will be entered to win this ‘ornament’…you can also discover multiple ways to qualify on her blog, at http://maureenobetita.com/blogslinks including signing up for our joint newsletter, The Kraken Chronicles, following her on Twitter, and liking her on Facebook.
But the days are running out to win this ‘bit of sparkle’ as she calls it, she will pick a winner at midnight, December 21st!
Good luck! And don’t forget something she called an e-mail address.
So many of these modern things are strange to me…
at 3:01 AM

Love the post. Makes me smile. Would love to win the ornament'
debby236 at gmail dot com

I fell like the Kraken is an old friend, now. Merry Christmas to you buddy and to Maureen, who so eloquently tells your tales of the swashbuckling, fascinating Caribbean.

I agree with Kate, I feel like the Kraken is an old friend...a good friend too! I LOVE your books, Kraken and the rest! Have a Merry Christmas!!

Thanks, all! The Kraken is holiday shopping, I so look forward to what he finds for me... One year it was hard to unwrap, he'd let the slime dry...