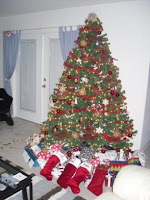 I am a bad mother. A really bad mother. I did a bad thing. My kids love Christmas and l love it too. I worked really hard to make sure they had lots of presents to open, even if a lot of them were from the UK equivalent of the Dollar Store. The existence of Santa was a given. They left mincepies and sherry for him, a carrot for Rudolph and a little bit of cheese for Santa Mouse. When they reached the age of twenty I decided I had to tell them the truth. Okay, when they were nine and ten. I figured it wasn't a good idea to go to big school thinking the guy existed. But I kept chickening out of telling them. I sort of hoped they already knew and were playing along to make sure they still got presents and kept me and their dad happy.
Then the hamster died. Well, he didn't die. I had to take him to the vet and the vet had to make him die because he was - well I won't go into details. Sob? I was hysterical, despite the fact that the little blighter terrified me. The hamster, not the vet. Teeth like razors and he seemed to find me especially tasty. Again - hamster, not the vet. So that night, while the kids were crying over the loss of Fudge, I figured - they're already upset, I might as well tell them about Santa and get all the tears out of the way.
Mistake.
They sobbed so hard and so long they didn't sleep. So I didn't sleep. My son threw up. My daughter threw up because her brother threw up. I felt like throwing up. Husband by the way - fast asleep in bed.
The kids still bring it up. The night Mum killed Santa. I've been trying to make up for it ever since.


If only they still liked presents from the Dollar Store.
at 3:01 AM

Ha Ha. You murderer! This lovely killer story shows what a terrifying and humorous writer Barbara is. I’m certain parents all over the globe would benefit from reading so they know how not to bring down myth, and their confidence to continue lying to their children will be reinforced. Thank you for sharing. Love the pics, too!

OMG, this was hysterical. I peed myself, so thanks. :/

Barbara - that is the saddest story I've ever heard but I have to respectfully disagree with you - Santa does exist. When I was ten I went to my mother and said "I know Santa isn't real." She looked me straight in the eye and said, "You know if you don't believe he stops coming."

To this day, I still receive a stocking full of goodies from him but now my mom does too. Funny how that works. Merry Christmas! :)

I was five when I found out. My brother opened a gift "from Santa" that my mom had bought when I was with her. I ended up telling the entire kindergarten class. Boy, did I get into trouble. I dread having to tell my own kids.

What? He's not real? So you mean when that guy at the mall pinched my ass and promised if I was a good girl he'd bring me a new laptop for Christmas...It wasn't true.

I think also I got called. Ho? Well, ho ho ho.
Anyone else have this problem?

My kids believe because he stops coming once you don't - so I guess they must still really believe.

Yeah, my hubby can sleep through any crisis too. Wish I could. I would have been sobbing right beside the kids.

Oh darn it, that explains why I never get any presents - well not ones that I haven't bought for myself and wrapped up myself and given husband to give me. The ones he manages on his own - er - I'd rather not have.

OMG, this is awesome!