Bringing the heat in Destiny Mine 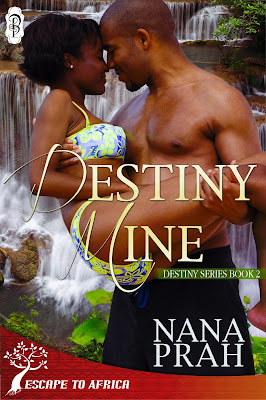 
Needless to say, Decadent Publishing is all about romance. For the most part they publish books that can singe a reader’s eyebrows off.
Until I wrote Destiny Mine all of my books were sweet. Not a bit of sex in them. This didn’t stop the passion and romance from being intense. With Destiny Mine I did an Emeril Lagasse and “Kicked it up a notch.” Bam!
I’m presenting three things that influenced me to write a sex scene in Destiny Mine with the door wide open.

1. An author friend asked me why I was holding back. Fear was the answer I came up with. Would I be able to write a sensual scene that didn’t cross the line into either boring or erotica? I tossed all trepidation to the side and did what I wanted. What did I have to lose? I was publishing with Decadent, who have some of the best editors in the world. They could help me balance it out later.
2. The characters asked for it. Esi and Adam are both passionate as individuals when it comes to life. When I put them on the same page that passion exploded.
3. I gave up wondering what people (I’m talking about my family and friends) would think about me when they read the book. This is probably linked with the fear in #1. Of course a person can’t live their lives based on other people’s opinions, so I let it go.
And now here I am with my first spicy romance. The super great news is that it’s on sale for 99 cents for a limited time at Amazon.

Blurb:
Extraordinary midwife, Esi Darfour, is looking to get married.  She’s a master matchmaker but has no luck when it comes to her love life and has yet to find a man worthy of her. Until she has to deal with gorgeous Dr. Adam Quarshie outside of work.
Adam is a player who refuses to get married—ever. His interest lies more in getting her into bed than in having any kind of committed relationship. Esi’s matchmaker instincts warn her to run in the other direction as quickly as possible, but her heart insists she stay…get closer…and see if what they feel for each other can change his mind.

Enjoy the following excerpt for Destiny Mine:
Her gaze travelled down his muscular body. Unlike many of the other doctors who tended to gain a belly as they grew older and settled into the comforts of married life, Adam Quarshie could overshadow any man in his late twenties. His stomach had remained flat and his muscles strained against his yellow button-down shirt when he moved.
She took her time raking her gaze up his body and to his face. Her gasp of embarrassment stuck in her throat as her eyes met his.
Why did he have to have such an adorable grin? God could’ve at least rotted his teeth to save the hearts of women all over Ghana.
“See something you like, Esi?”
She cleared her throat. “Yes, I do. Your shoes are nice. Where can I get a pair for my brother?”
He chuckled. “My shoes. Hmm. I got them on Oxford Street in Osu.”
“Thanks.”
He moved towards her, and she refused to step back as he crowded her. He smelled amazing, like he was fresh from a shower. She struggled not to move closer or inhale deeper.
“Or I could take you.” His voice came out soft yet had a distinct rumble.
Did the man not know how to be anything but seductive?
If she checked her pulse, she knew it would be way above the normal range. She snorted as she stepped around him and went to the patient’s bedside. “I’m going home. You did a great job.” She tilted her head to view the child’s face cradled in the new mother’s arms then smiled at the newborn’s mother. “You were able to gather the strength to push the baby out. You are a strong woman, Ama.”
The woman ducked her head. “Thank you.”
Esi turned to Adam, not bothering to hide her annoyance. “Are there any other patients you want to see?”
“I’ll come back to do ward rounds later. How about going to Osu?”
“I’d rather…rather….” Fatigue had blocked her brain. Later on in the day, long after it was too late, she’d think of any number of things she could have said to put him in his place.
He raised an eyebrow. Their perfect arch sat over slanted dark brown eyes.
“You’d rather what?”
“Eat a live snail.”
He scrunched his face. “Disgusting. No Osu for you, then. Next time, I’ll ask to take you somewhere that won’t make you prefer eating something raw and slimy over hanging out with me.”
“No such place exists, Quarshie.” They walked, rather, she stalked while he strutted, down the hallway towards the nurse’s station.
“I’m sure there is somewhere, and one day I’m going to take you there.”
She didn’t bother to look at him. “In your dreams.”
He winked. “Always in my dreams.”
Her heart skipped a beat as Sade’s classic song “Smooth Operator” came to mind. She regarded him through narrowed eyes as he headed towards the door. His heartbreaking ways didn’t appeal to her at all. Everyone knew relationships weren’t his thing. She’d never even consider going out on a date with him. She knew too many casualties of his charm. The type of guy who would go to all sorts of lengths to get a woman on his radar. Once he caught and used her, he moved to the next one…or two. After having once dated a womanizer, she wouldn’t subject herself to that kind of man again.
No way. Not her. Never.

About the Author:
Nana Prah is a multi-published author of contemporary, multicultural romance. Her books are sweet with a touch of spice. When she’s not writing she’s reading, indulging in chocolate, and enjoying life with friends and family.