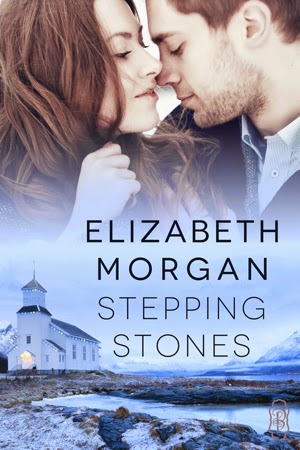 Stepping Stones possibly falls under being a strange name for a book let alone a romance book. And perhaps it is even stranger since there aren’t actually any stepping stones in the story.
Have you ever heard the expression, “just take one step at a time?” You probably have since such sayings like, “take each day as it comes,” falls alongside it.
These sayings are our way of telling ourselves or others that we have to take things slowly, we have to take our time, and we can’t rush decision or choices. Every day we are taking steps in our life path. Some days we may take a couple of steps back, but it’s all about progression; about moving forward.
Have I confused you? I apologize if I have, but I shall start at the beginning.
The idea for Stepping Stones came in a dream. Now, I have had many dreams and been shown scenes etc which I have immediately written down when I have woken up, because I thought they would make interesting stories.  But this particular dream was the first and only one I have had to date where I was basically given the story on a silver platter. Not that I am trying to say writing this story was easy, because it wasn’t and for a couple of reasons, but I saw everything.

In this dream I was in Maggie’s shoes. I remember pulling up in a taxi outside this church situated on a cliff top. The bride ran straight up to me and said that her maid-of-honour couldn’t make it and she wanted me to take her place. I was reluctant, but she talked me round.
I remember walking down the aisle and being gobsmacked that my ex was the Vicar marrying this couple. I stood through the service with my eyes fixed on the wall not daring to look at him, and then when I finally could get out of their I ran . . . right into the last person I wanted to see; my foster brother. I was angry with him, but I missed him.
The next scene I was in the garden with my mother and father who told me – and this is where there were some actual stepping stones – and my foster brother to go and argue it out, and each time we told the truth, or made a point, we could take a step forward. The aim being that by the time we met in the middle we had to be fine and make up.
Now, it’s a bit of a strange dream, and sure it lacks in detail, but that was the seed for Stepping Stones, and I woke up knowing that I had to write the story. It took me two years to do so, but I finally finished it and submitted it.
But it still isn’t obvious why I called the book Stepping Stones, is it?
Only a few of those elements found their way in to the book. I added and padded the rest out, but I didn’t add the actual scene with the stones. Why? Well, it probably would have worked if Maggie’s father was a psychiatrist and had crazy exercises for getting people to communicate, but that’s not her father, or how he is.
But even though no stones are visible or present, the point of them, and the saying still apply to this story, because Stepping Stones is about Maggie retracing her steps. It’s about her finding her way back home, back to happiness, and having to take the necessary steps to fix the damage she caused six years prior.

She has to take one step at a time to figure out what she truly wants, where she wants to be, and who she wants to be with.
And that is why the book has been titled Stepping Stones.

Blurb:
There's nothing like a wedding to bring the family together....
If not for her baby sister’s impending marriage, Margaret West would never return home. But after six long years, she finds herself a maid of honor who must answer to the people she left behind.
If her parents’ interrogation doesn’t drive her to drink, facing her foster brother, Adrian, just might. To make matters worse, her ex-fiancé is the vicar who will conduct her sister’s ceremony.
Everyone demands to know why she ran off. But the more time she spends at home, the more Margaret realizes even she doesn’t know the real reason.

“When is Aidy getting here?” Jessica grabbed the large bowl of scrambled eggs and brought it closer to her plate.
“I think his flight is due in at three.” My mother placed a dish of bacon on the table and took a seat beside me. “He will be in time for the wedding rehearsal; don’t worry.”
My stomach clenched. “Wedding rehearsal?” I coughed, trying to clear the chunk of toast lodged in my throat. “What wedding rehearsal?”
“Today at four. We’re running through the service.” Jess scooped egg onto her plate. “I told you.”
Nervous laughter bubbled in my throat and try as I may, I couldn’t stop shaking my head. “No.” I patted my chest. “No, you never mentioned a rehearsal.”
“Oh.” She placed the bowl back in the middle of the table. “I could have sworn I did.”
“Nope, you didn’t. Believe me, I would have remembered otherwise.” I grabbed my mug and knocked the coffee back before finishing my piece of toast.
“Well, it’s no big deal.” Edward took the bowl of eggs and helped himself. “Just a quick run-through.”
“Will everyone be there?” Forcing a smile on my face, I looked up at them both, hoping like hell my question would pass as innocent and genuine curiosity.
“Anyone who is involved in the wedding itself will be.”
Great. So that meant Jessica, Edward, the parents, and the bridesmaids, plus me. That left Adrian and…. “Will Vicar Taylor, be there?”
Oh God, did my voice just go higher?
“Yes, Margaret, William will be there. He is the one who is marrying Jessie and Edward, so he needs to be there.” My father skewered some bacon and tomatoes onto his fork.
Grimacing, I reached out and grabbed another piece of toast. “Just a question, Pa.” A stupid one, but a question nevertheless….
“It is normal for people to have wedding rehearsals, Margaret. Just because you—”
Jess picked up the coffeepot. “Does anyone want more coffee?”
I straightened, my focus fixed on Pa. “I’m aware of that.”
“Maggie?”
My father’s shoulders went rigid. He lifted his head and our gazes locked. I didn’t miss the way the muscle in the side of his neck ticked. Arguing with my father in front of Jessica and Edward was not an option, so I looked away.
“Please.” I held out my mug and Jess poured the dark liquid.
I could kick myself. A wedding rehearsal hadn’t even crossed my mind. Having to stand at the altar before William on the actual wedding day would be hard enough, but having to do it twice…my stomach churned.
“So, will Adrian come straight to the church?” Edward cut the awkward silence.
“Yes. He will get a taxi to the church, and then we will bring him and his luggage back here.” My mother held her mug out to Jess.
“Adrian is staying here? Tonight?” I added sugar to my coffee. “Won’t it be crowded? I thought—”
“No more crowded than it was in your childhood.” My father took a bite out of his toast.
More and more good news. Of course he would be staying here; it was his family home after all. I guess, it was stupid of me to hope that he would go to a B&B, but my parents wouldn’t have allowed it even if he did suggest it. I hadn’t seen him in six years, hadn’t spoken to him. And yet, in a couple of hours I would be locked in the same house as him.

Interested in winning a copy of Stepping Stones? For a chance all you have to do is comment to this post with the answer to the following question: What's your favourite saying? (Or what sayings do you parents use a lot?)
Competition is open internationally and will end midnight on Sunday 14th December. Winner will be picked with the help of Random. Org
~ * ~