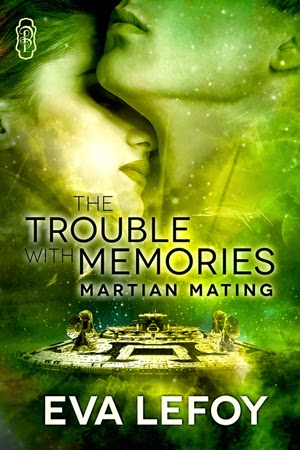 Remember the old Eggo Waffle commercial where the kid said, “Leggo my Eggo?” Well, this is more “Leggo my Martian!” It doesn’t really rhyme, but it’s kind of cute. After all, who but a scifi romance reader would grab a Martian anyway?
And if you’re going to grab one, the real question is, are they sexy? Are they worth grabbing?


I think a lot of readers find werewolves and vampires and demons sexy, so why wouldn’t Martians be sexy? Is it their green skin that might put people off? Well, I don’t think the Orion slave girls on Star Trek TOS had any trouble with that! See for yourself:

Besides, I think that Leader Desslok – who was blue-skinned and a cartoon character – was quite sexy as well! So the green is probably not a problem. Maybe, though, most might worry the Martians are smaller, considerably shorter creatures. That could be a problem, but don’t tell that to Peter Dinklage, cause he’d love to prove you wrong. No, the main problem with Martians is that they’re extinct.
In The Trouble With Memories, the proud Martian warrior race is dead and gone – or is it? When a determined scientist uses viral Martian DNA to create an artificial intelligence interface, he unknowingly resurrects the genetic backbone of the long lost species, which attempts an internal takeover.  As in, why bother to grab a Martian when the Martian is already grabbing you?
Now that’s a problem.

The Trouble with Memories
Helium toads!
Lieutenant Lucy Borasco has her phase pistol ready and her ex-boyfriend in her sights. She has every intention of making him pay for choosing his career over her. But she hadn’t factored in a Martian sneak invasion, Cal’s incessant need to save the universe, or the risk of permanent damage to her complexion. Getting Cal back will cost her more than she thinks, leaving her changed forever.
Captain California Sykes’ memories are gone, his career is in ruins, and his ex-girlfriend nearly kills him with a kiss. Can he overcome the Martian invasion, save the rest of the team and win Lucy back again in the process? Or will his seat-of-the-pants plans and the canned fish rations cost him everything he holds dear, including his sanity?

Here’s a snippet:
The windows flexed and the floor rumbled as the jets did another close fly-by. He ignored them in favor of intently ogling the rounded globes of Lucy’s ass. When she spun to face him, he nearly lost his balance.
Three steps later, she was in his face. He braced himself for her wrath.
Her fingers curled around his collar nice and tight. When she gave him a light shake, his head whipped back and forth. Maybe she was trying to rattle some sense back into his malfunctioning brain. “Comet tails, Cal. If this is some game you’re playing to make me miss you, I swear I’ll fill your ass with helium and shoot you out one of those planes!”
He loved how the fire in her eyes matched her hair and the way she jutted out her chin at the end of her pronouncement. But he’d told her the truth. This was no game. His memories of her were completely gone. “How can I prove to you I’m not lying?”
Her lips curled up in a smirk. “Kiss me.”
With a confident toss of her head she laid claim to him, answering his questions about how he’d known her. Hell, he hadn’t known her, apparently he’d known her. The news made his dick swell with pride. His mouth quirked into a cocky smile.
“Come on, Cal. Today’s Valentine’s Day after all.” Her hands caressed his neck, working their way up his jaw. “One little goodbye kiss won’t hurt.”
Her touch confused him. Familiar yet foreign. New sensations and ghostly memories rose toward the surface of his mind but were squashed before they reached the light. He shook his head but the cobwebs didn’t clear. Why couldn’t he remember? Everything but those fragging ships seemed vague.
A twinge in his right shoulder shot up his neck, and he couldn’t help thinking the pain was a warning. He braced for more, but none immediately came. He wanted out of this box, wanted answers. But he wouldn’t endanger anyone else to get them.
“Lucy.” His voice sounded hoarse, as if he’d sucked sand into his windpipe. “Don’t.” Down below, his cock begged, yes, yes, yes.

Bio:
Eva Lefoy writes and reads all kinds of romance, and is a certified Trekkie. She’s also terribly addicted to chocolate, tea, and hiking. One of these days, she’ll figure out the meaning of life, quit her job, and go travel the galaxy. Until then, she’s writing down all her dirty thoughts for the sake of future explorers.