A Bit of a Stretch 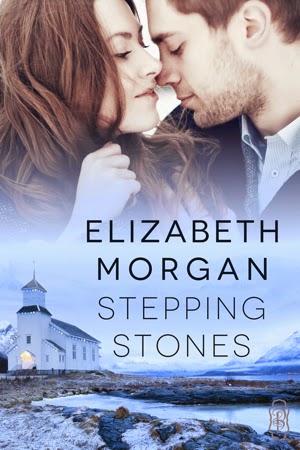 Stepping Stones is my first sweet romance story, and I have to say a part of me is wondering if I have pulled it off. Have I managed to create an interesting and good contemporary romance?
As someone who prefers to write erotic romances with graphic language and sexual scenes, I found writing a sweet romance - and one without any paranormal elements as I do love to dabble in that particular sub-genre - rather restricting. You see, I am use to having no boundaries when it comes to world building and characters; the sky is literally the limit and when it comes to the paranormal genre, well, it is one big playground. So, I actually found it a little hard to write within my own reality; everyday life with normal people, and problems.
Don't get me wrong; every book I have written to date has been - in one way - a contemporary story, as in the time period has been set in modern day; the year not being any further than six years from where we are now. But paranormal elements have always been strong not to mention big factors in my usually stories, so it was odd for me to not have one of my characters changing into a werewolf, or fighting off some hideous sea creature.

Stepping Stones is my first sweet romance, a book where sexual desire plays no part in the story, or in the characters relationships. That sounds terrible, I know. Sex isn't everything, and it isn't the only factor in two people's relationship, but since I am mainly an erotic romance author it was a challenge to keep that door closed, although in all honesty my characters didn't even want to go there, so I didn't feel torn about the matter.
But I dreamt this story, and I fell in love with it. So, I had to write it.
Ignoring the restriction and fear I felt while writing this story, restriction that faded once I got into it, but the fear still remains due to the fact that this book is so different from my other works. I did enjoy writing this story. In a lot of ways, and I know it may sound silly, this book was me stepping outside of my comfort zone; trying something new. I know how crazy that sounds, but every author has a genre they favour, or one they may have a talent for. There are genres in which I would love to dabble, for example, steampunk, but I don't feel I would do a good job. Then again, who knows? Maybe one day I will be able to take that step and create a really good steampunk story, only time, growth, and experimenting will tell.
So, even though having Stepping Stones contracted and published is a really good sign, I do feel it was a small stretch for me. And this particular book will continue to have a question mark over the top of it until I find out off y'all whether or not I have the knack for the genre. I'm sure my readers, old and new, will let me know, and as always I will appreciate your honesty.
For now, I shall leave you with the blurb and an excerpt. ;-P

Stepping Stones
(Sweet Contemporary Romance)
Blurb:
There's nothing like a wedding to bring the family together....
If not for her baby sister’s impending marriage, Margaret West would never return home. But after six long years, she finds herself a maid of honor who must answer to the people she left behind.

If her parents’ interrogation doesn’t drive her to drink, facing her foster brother, Adrian, just might. To make matters worse, her ex-fiancé is the vicar who will conduct her sister’s ceremony.

Everyone demands to know why she ran off. But the more time she spends at home, the more Margaret realizes even she doesn’t know the real reason.

~ * ~
Excerpt:
“When is Aidy getting here?” Jessica grabbed the large bowl of scrambled eggs and brought it closer to her plate.
“I think his flight is due in at three.” My mother placed a dish of bacon on the table and took a seat beside me. “He will be in time for the wedding rehearsal; don’t worry.”
My stomach clenched. “Wedding rehearsal?” I coughed, trying to clear the chunk of toast lodged in my throat. “What wedding rehearsal?”
“Today at four. We’re running through the service.” Jess scooped egg onto her plate. “I told you.”
Nervous laughter bubbled in my throat and try as I may, I couldn’t stop shaking my   head. “No.” I patted my chest. “No, you never mentioned a rehearsal.”
“Oh.” She placed the bowl back in the middle of the table. “I could have sworn I did.”
“Nope, you didn’t. Believe me, I would have remembered otherwise.” I grabbed my mug and knocked the coffee back before finishing my piece of toast.
“Well, it’s no big deal.” Edward took the bowl of eggs and helped himself. “Just a quick run-through.”
“Will everyone be there?” Forcing a smile on my face, I looked up at them both, hoping like hell my question would pass as innocent and genuine curiosity.
“Anyone who is involved in the wedding itself will be.”
Great. So that meant Jessica, Edward, the parents, and the bridesmaids, plus me. That left Adrian and…. “Will Vicar Taylor, be there?”
Oh God, did my voice just go higher?
Yes, Margaret, William will be there. He is the one who is marrying Jessie and Edward, so he needs to be there.” My father skewered some bacon and tomatoes onto his fork.
Grimacing, I reached out and grabbed another piece of toast. “Just a question, Pa.”
A stupid one, but a question nevertheless….
“It is normal for people to have wedding rehearsals, Margaret. Just because you—”
Jess picked up the coffeepot. “Does anyone want more coffee?”
I straightened, my focus fixed on Pa. “I’m aware of that.”
“Maggie?”
My father’s shoulders went rigid. He lifted his head and our gazes locked. I didn’t miss the way the muscle in the side of his neck ticked. Arguing with my father in front of Jessica and Edward was not an option, so I looked away.
“Please.” I held out my mug and Jess poured the dark liquid.
I could kick myself. A wedding rehearsal hadn’t even crossed my mind. Having to stand at the altar before William on the actual wedding day would be hard enough, but having to do it twice…my stomach churned.
“So, will Adrian come straight to the church?” Edward cut the awkward silence.
“Yes. He will get a taxi to the church, and then we will bring him and his luggage back here.” My mother held her mug out to Jess.
“Adrian is staying here? Tonight?” I added sugar to my coffee. “Won’t it be crowded? I thought—”
“No more crowded than it was in your childhood.” My father took a bite out of his toast.
More and more good news. Of course he would be staying here; it was his family home after all. I guess, it was stupid of me to hope that he would go to a B&B, but my parents wouldn’t have allowed it even if he did suggest it. I hadn’t seen him in six years, hadn’t spoken to him. And yet, in a couple of hours I would be locked in the same house as him.

Where to find Elizabeth Online:
Website
Blog
Twitter: @EMorgan2010
Goodreads
Facebook
Pinterest
Blog (Shared with Dianna Hardy)
~ * ~
Thank you for having me over today and thank you to all of you for stopping by. If you would be interested in winning a copy of my new release, Stepping Stones or maybe a swag pack, then please do leave an entry on the rafflecopter. J 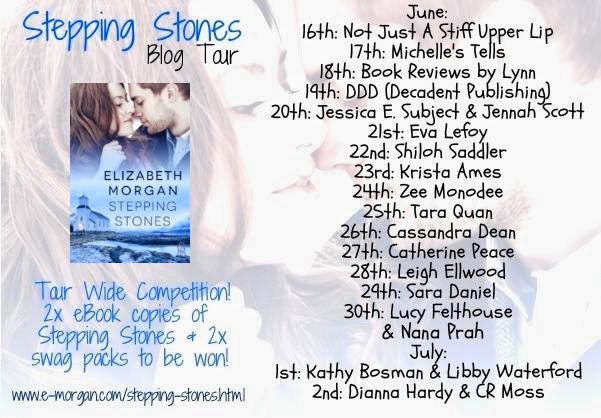 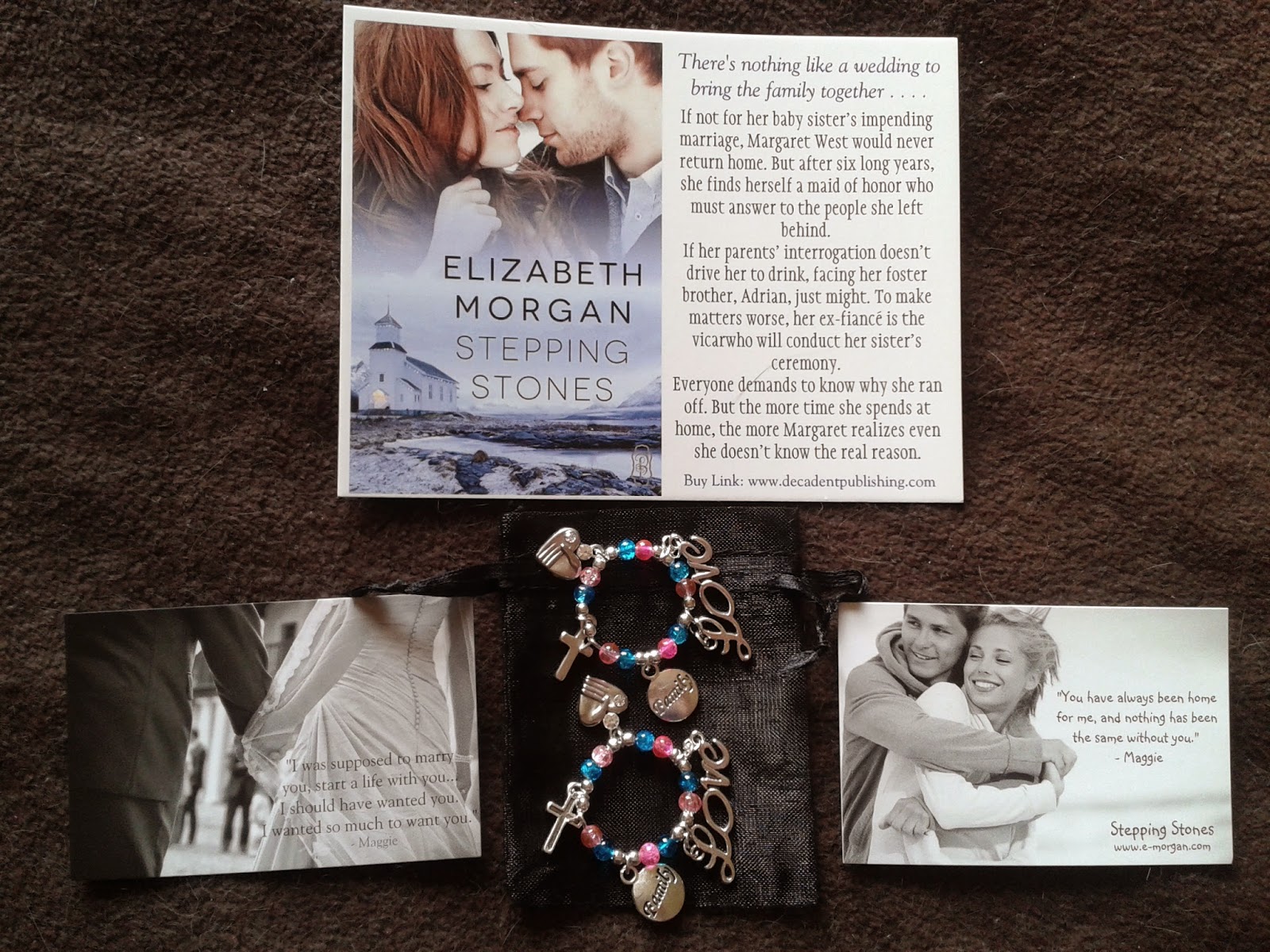 Thanks Nana. Yeah, I had the story idea as a dream and I just had to write it. It was a change of pace and if I ever had another sweet romance idea pop into my head I don't think I would ignore it.