Self-Assessment, Sex, and a Giveaway!

Based on that title you must be wondering what in the world this post is about. Me too! Ha! Actually, it's about a little self-assessment, sex, and a giveaway. I know, I know. See here's how it all comes together. I just finished teaching an online course, Pumping Up The Sexual Volume, on how to write hot sex for my local RWA chapter in San Diego. It was a great class! But in order to put the class together I had to do a little self-assessment. I had to find a way to explain the process I go through to a bunch of people through a computer.
So I sat down and assessed my process. How do I think about the scenes? The characters? The sex? I spent a few weeks (at odd times, obviously!) laying it all out. Nine lessons and four bases later I had it all laid out. I walked the class through deciding if it's the right time to have sex, what kind of sex to have (yes, there are kinds of sex!), and we even broke it down the old-fashioned way...the bases.
I laced the lessons with a couple of samples from The Market series published with Decadent to help illustrate what I was attempting to explain. I have to say I really enjoyed it. I just hope the class did too!
You might be wondering what the most important lesson of the class was. Well, and I think readers will agree, the sex has to be just as vital to the plot as every other scene in the book. Sex for the sake of getting naked and having some fun is fine in real life, but not so much in a romance book. The characters need to grow, to change in some way through each interaction in the book and most especially any physical ones.
That is the key to keeping the sexy in the sex scenes.
If you might be interested in taking my class sometime, just sign up for my newsletter and I will be sure to let you know about it as an upcoming event. http://bit.ly/1qhut8X

The Market Series is a set of three novellas that take place in and around a Victorian era London brothel called The Market. The brothel is run by Madame Marie Marchander. The Market consists of three row houses. The main house in the center contains the common rooms. From the street, the house on the left is for the average customer who is there to see one of the ladies of the house. The right side caters to those with less average desires and the income to indulge them. Kinks of all kinds can be found on the right side. Voyeurs given something to watch, floggings can be both given and received, domination abounds, and orgies are not uncommon occurrences.
Want to know more?

Lady Katherine Drummond plays by society’s rules, even after the Ton turns on her. Shunned by her peers, she keeps up appearances by day but allows her true self out in the privacy of The Market. There, in the arms of one man, she comes alive. So much so, she signs a contract to be his for six months. Despite never having seen his face and knowing him only as Sir, she fears losing her heart to the man who breaks through her defenses.
Lord Raymond Tarkenton, the Earl of Heathington, despises being one of the most sought after bachelors of the Ton. He could never ask a woman of his circle to submit to his sexual needs, and a mistress would never be an option. For now, one masked woman at The Market holds his undivided attention. When he realizes that his masked lover and Lady Katherine Drummond are one and the same, he must find a way to convince her that they are bound together by more than the straps at her wrists and the contract they signed. He must reveal himself and his love to her. But will she accept him for more than a sexual escape?

“Wow. This one was the scorcher of the month.  Sizzling and risqué, indulging in this book is a definite way to escalate your arousal levels. … I really enjoyed this tantalizing little morsel.” - Lady Ryleigh, Ravishing Historical Romance Reviews, All Romance eBooks

Want to win a copy? Leave a comment below about which activity you like most in a sex scene. Is it the kiss? The grope? Maybe the bodily exploration? Or do you like it when they get down to brass tacks *cough*, well you know what I mean.

Me? I like the bodily exploration. All the teasing and tasting that can be done.
Want to hear about my other books either in the series or from Decadent? Check me out here: http://bit.ly/1kIzfZM 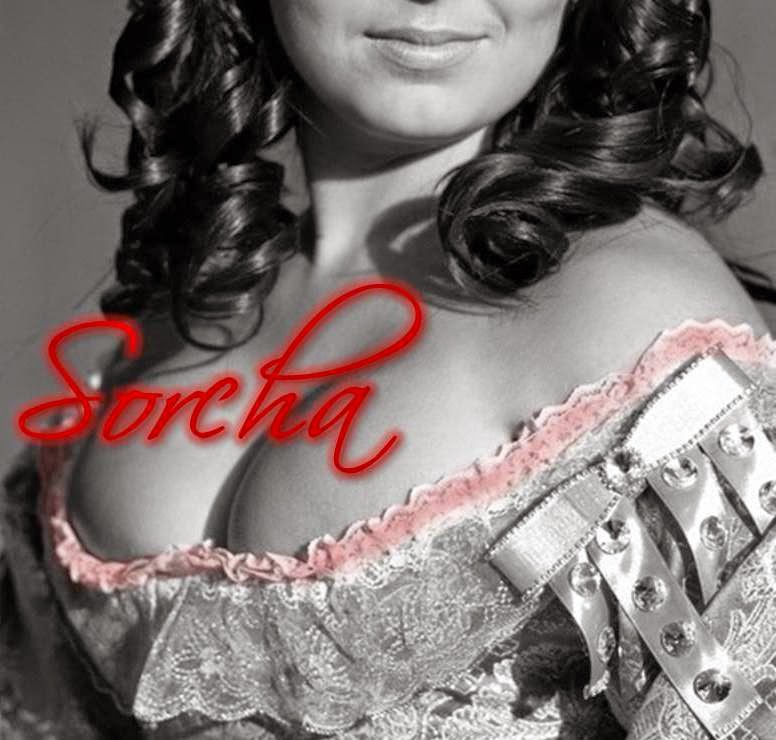 Sorcha Mowbray is a mild mannered office worker by day…okay, so she is actually a mouthy, opinionated, take-charge kind of gal who bosses everyone around; but she definitely works in an office. At night she writes romance so hot, she sets the sheets on fire! Just ask her slightly singed husband.
She is a longtime lover of historical romance, having grown up reading Johanna Lindsey and Judith McNaught. Then she discovered Thea Devine and Susan Johnson. Holy cow! Heroes and heroines could do THAT? From there, things devolved into trying her hand at writing a little smexy. Needless to say, she liked it and she hopes you do too!