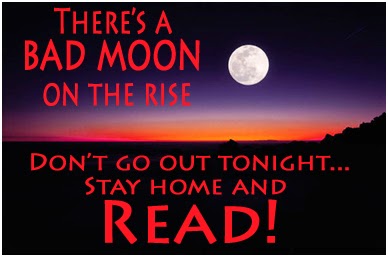 On April 15th there’ll be a cosmic—literally out of this world—ménage a trios. The sun, earth and moon are going to get it on in perfect alignment. The earth will take dominance, its shadow blanket the moon, and tomorrow night will begin a rare sequence of four successive, total lunar eclipses—a tetrad of blood moons—over the next two years. Each blood moon will be separated from the other by six full moons without any partial eclipses between them.
The action begins at 1:20 a.m. on the East Coast, according to Sky and Telescope magazine. Another source says it’ll start at 3:06 a.m. EDT, and end at 4:24, meaning it’ll last for 78 minutes and highlight the sky across the western hemisphere.
The moon rises in the western Pacific and only the last half of the eclipse will be visible there. In much of Europe and Africa, the moon will be setting so not much to see. That means if you have shifter issues, hunkering down in Europe or Africa where there’ll be less hunters about is a good plan. The night owls who don’t fang and claw out, those with no fear of the moon, will be all set to watch. For those of us who need more than caffeine to stay awake past midnight, I can’t think of a better way to remain wide eyed than to read a romance that happens under a blue moon, and a thriller with one of the most evil villains of all time, and an erotic and fun take on Cinderella.
Here’s what’s on my e-reader:

Home for the holidays…
Sierra O’Brien and Carter Grove have a lot of history—and regrets between them. Their high school romance didn’t survive after he went away to college. Despite tremendous business success, Carter never found another woman like Sierra and has two failed marriages to prove it. Sierra’s luck wasn’t much better, but after being widowed, she heads back to Bliss to plan her future. The last thing either expected was to run into each other or to reconnect to the magic that once drew them together.

Can Sierra and Carter make it work this time or are they doomed to repeat the past and let the same mistakes drive them apart? In Bliss, the inexplicable is an everyday occurrence, and anything is possible—especially during a blue moon.

Some crimes can never be forgotten.
Kate Evans doesn’t take risks. She chose her apartment with care—a safe district with a good neighbor—a place where she can live a quiet, unassuming, under-the-radar existence. Then she makes one mistake and opens her door to accept a delivery of flowers from a secret admirer and her life will never be the same again. A guy she’s never seen before bursts into her apartment and asks her to marry him. Jack Thompson won’t take no for an answer and drags Kate on a cross country journey to hell.

Invalided out of the police, Nathan Beranson works as a private investigator in San Antonio, Texas where he spends too much of his time following unfaithful spouses and delivering the bad news to their partners. When his fiancée cheats on him with Jack Thompson, the half-brother Nathan’s only just met, he becomes obsessed with Jack in the same unhealthy way as his revenge-seeking clients. By the time Nathan finally realizes putting the ghosts of the past to rest is a wiser option than settling an old score, it’s too late. He’s already been drawn into his sibling’s latest deadly game and Nathan and Kate find their nightmare is only just beginning.

Sometimes Fairytales come true.
First Sergeant Cori Valentine faces a bleak future. She’s turning forty in three weeks and life as she knows it is over. An injury received while on deployment has earned her an early retirement from the Marine Corps, something she’s not sure she’ll survive. Things get even better when interfering Marines set her up on a blind date for a party she doesn’t want. The guy has to be a total toad to want to go out with her. Right?

When Madame Eve informs retired SEAL, Sol Keller, she’s found his perfect match, he doesn’t believe it, but takes up the challenge. One look at the First Sergeant in a sexy dress and combat boots has him wondering if fairytales really can come true. Madame Eve might be the legendary Fairy Godmother, and Cori his Cinderella. Sol intends to show the Marine beauty a Prince Charming she’ll never forget, and that retirement isn’t the end of her story but merely the beginning.

Lastly, you could check out another ménage a trios that, in this author’s humble opinion, eclipses a lunar show.  Did I mention this M/M/F is on sale—99 cents!—until 4-22?

Gwas can outrun a horse, knows how to hide and steal, but is ignorant of the ways of men. The last thing he expects when he is rescued from a miserable existence by a blue-eyed, blond haired angel is to be promised as a Druidic sacrifice to Eostre. Unfortunately, the only direction Gwas wishes to flee is straight into the arms and knife of his savior, Gareth.

Maura knows Gareth is no angel, but she adores him with a passion that time and loneliness cannot dent. When he rides in carrying an injured lad who fears her on sight, she is drawn to open her heart to the abused orphan as well.

Gareth is caught between his liege lord and brother’s fist, and an emotional dilemma that grows harder and harder to deny with every passing season. If he must defy man and gods in order to embrace his heart’s desires, so be it.

When the clash of old and new religions puts lives in peril, ultimate sacrifice bears witness to enduring love. Winter gives way to spring, and the evolution of a colorful myth spreads across the land.

For those who take a moment to comment, please leave your email. A winner will be picked at random to receive their choice of a DP story of mine. Happy reading.