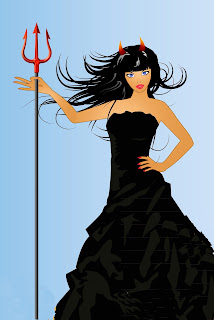 Well, hello, you big, beautiful demon. Where have you been hiding all of Bunny’s life? I’m mean seriously, how the hell did you do it? I don’t usually miss men like you.

You should probably be glad you’ve missed me, sweetcheeks. Or, more correctly, that I’ve missed you. Been doing Queen Velda’s bidding in Duyvil Tand, and wherever else her missions take me. You know, your liege? Queen of the Succubi? Down in Devil’s Tooth, the demon stronghold deep within the Catskills? No bells ringing for you yet? Don’t know how Velda managed to miss summoning your ass to her court…but just be glad she hasn’t sent me to…enforce you.

I mean, welcome all to another month of...gah, where was I going with this? Oh yes. Hello 1 NightStanders. Please help me welcome the delectable Bhyrne Raines to my hot seat today.

*Picks up chair and sets it next to his seat. Plops down, crosses legs and turns toward him.*

Hiya, hot stuff. Please tell me all about your, fine-ass self, um, I mean please tell our lovely audience a bit about yourself.

Yeah, well, let’s see. Not a demon of many words. Don’t much like talking about myself. Like I said, I’m the Queen’s enforcer, commander of her royal guard. It’s a paycheck, you know? Prestige and infamy I wouldn’t otherwise have. Pretty much bit and clawed my way to the top. Prefer to keep my early years clouded in mystery, really. And then that meddling Taryn Kincaid exposed me.

Take your time. I have nowhere to go for the next century or two. All ears....

Huh. Thought you were all horns and tail.

How big are those boots?

You know what they say about the size of a man’s fee? Yeah. That.

How tall are you?

I could probably play for the NBA. If I was a team player. And had any interest in squashing a small orange ball through a net hoop.

Where do you workout?

These days? In bed. My baby keeps me busy.

I’ve been meaning to get a gym membership.

Whatever works. Zena and I burn our calories other ways.

Who did you say was your date?

Zena Night. You probably know her rep. I mean, as succubi go, she hasn’t exactly been a wallflower. But that was before Madame Eve hooked us up and Zena’s royal lineage became more or less common knowledge. Yeah, once again, blaming the interfering Taryn Kincaid for that. Pay back is gonna be sweet.

Um, *picks up chair and moves it back* maybe I better sit over here.

Good move. You really don’t want to mess with Zena.

So, I have to ask, even though I don’t want to, why a 1 NightStand? Why on earth or in any of the seven levels would you need someone to find you a date? You don’t exactly look like the desperate type.

Yeah, so…the Queen sent me to fetch Zena back to Duyvil Tand. Found her on her knees in some human club with an unworthy mortal. Not enough eye-bleach in the world to erase that image. But I was going into breedspawn and not thinking too clearly. I’m usually cool and controlled…have to be in my line of work. But lust overwhelmed me and the heat…by the Acheron and Styx…I thought I’d burst into flame if I didn’t get relief.  You know what breedspawn’s like. *Studies Bunny’s dropped jaw, the drool dripping down her chin.* Wait. You don’t? You’ve never been with a demon male in his prime when he’s going through that? Wouldn’t have taken you for a virgin! But you haven’t had sex if you haven’t had breedspawn sex.

Um, so where do I find a couple of you going through this breedspawn thingie. Sounds like my cup-a-tea. Of course daddy would probably not approve. He never does. Back to the interview...So, what were you looking for in a woman? What attributes did you list? Royalty perhaps?

Okay, so I was too far gone to fill out the 1Night Stand questionnaire. My cousin, Max Raines—you may remember him from FROST? He set it up with his squeeze, Dagney. And Zena’s other sister, Lily. You may remember her from LIGHTNING. I think you interviewed Max once. Lily, too. Anyway, Max, Dagney and Lily did the paperwork and their 1Night Stands were such major success stories, and since time was of the essence for both me and for Zena, Madame Eve agreed to hook us up. Zena had to find a mate in two days or the Queen was going to choose her a consort from the demons assembled in Duyvil Tand, itching to get at her. Zena took a look at all the scales and fangs and talons and nearly lost it. I dunno. Maybe she’d been playing with humans too long. Had to step up and protect her. And when the Queen tortured me for my defiance…Zena had my back. And, well, other parts.

Um. Well. Do you have any brothers? Single brothers? Available brothers? Ones that won’t cause me to lose my head?

Play your cards right, girlie, and I’ll see what I can do. As for losing your head, that’s up to you.

Can I get their numbers?

You’re girlfriend isn’t around is she?

Nah. She’s hanging in Sleepy Hollow with her sisters.  Halloween’s
coming and there’s  no place like Sleepy Hollow in October.  More importantly—if there’s anything more important than Halloween—breedspawn turned out well for us. We’ve got a little demonling on the way and Z wants to be near her sisters when our blazelet arrives.  She thinks I should quit the enforcer game and set up a security agency in Sleepy Hollow. Thinking about it. Might have to smooth over some tricky things with the Queen.

*Bites lip* Don’t like rocking any political boats, if you know what I mean? When one of daddy’s ladies get mad...well, it isn’t pretty. He gives me free run these days, to go anywhere I feel like it, as long as I’m collecting souls. You know what I mean? *Leans closer and whispers behind hand.* You can keep a secret, right? Z isn’t the only one. I’m the illegitimate product of a mad fling a few centuries back and I’m suppossed to not draw attention to myself—deep, dark family secret and all. Anywho...that would be why you haven’t seen me at court, but not to worry, sweetcheeks, I’m sure you’ll see more of me now that you told me you might have a few brothers, but let’s just keep this whole linage thing to ourselves, okay. Don’t really want to meet Velda, thank you very much. I have much better things to do with my time.

Yeah. Trust me. You really don’t want to get on Velda’s bad side if you don’t have to. And Z is a princess. Now that she’s become a one-demon female, a very possessive princess.

Let’s do some quickies before she shows up, shall we?

I don’t really do quickies. Long and slow.  But I’ll make an exception.

Black as a raven’s wing.

That’s a question? Um, do I need to remind you what Zena was doing when I first saw her?

Like it matters? It’s still gonna be long and slow. Or frenzied and fast. Always delicious.

Boxers or briefs? Please say commando. I really would like to visualize that right about now, because I know that’s all I’m getting here. And well, that should last me a good long while, you freaking sexy, demon, you.

Commando. Need to be ready, you know? Not like I’m not. Want to look at my boots again?

Not yet. I give her another five seconds. At most.

Okay, if you’d like to know about Bhyrne and Zena’s date, you can get the tell all exclusive here:

For now, I think I better run. No, I mean I think really better run. Didn’t realize exactly who his girlfriend was when I started this interview.
Ta!

*Vanishes in a puff of smoke*

Heat Wave
BLURB:
Sent into the human realm to retrieve prodigal princess, Zena Night, Bhyrne Raines is shocked and unprepared for his carnal reaction to the sexy succubus. In service to the succubus queen, the rugged enforcer must stifle the instant passion exploding within him. Fulfilling his royal duty doesn’t allow for quickie dalliances. His biological clock is ticking, and he begins to enter breedspawn, an intense and unstoppable frenzy of mating all fire-demon males must endure. But the more he wants to avoid Zena, the more he’s drawn to her.
Reluctant to give up her carefree life of partying among the mortals when the hot-as-sin Bhyrne comes to fetch her for the queen, Zena uses her succubus wiles to entice him, or at least delay the inevitable trip to the royal court. Once in the demon stronghold, hidden deep within the Catskill mountains, she learns the reason for the summons: she must choose a consort within two days.
Zena needs a mate. Bhyrne needs to mate. With time running out for both of them, they each turn to 1Night Stand. With time running out, can Madame Eve come to the rescue?

EXCERPT:
Holy freeze gun, Batman. The words died before she managed to expose them to air. Her mouth snapped shut.
One of the Queen’s guards stood before her, huge and tall, nearly twice the size of most of the other males in the joint, a hella hunka supernatural male. Clearly not human, although Hugo Boss’d to his Adam’s apple in an apparent bid to fit in among the humans trolling for hot sex, illicit drugs, watered-down booze and loud music. Beneath the fabric of the unstructured designer suit, the toned muscles of a demonic warrior rolled like tidal waves. Even without the small lapel pin the uninformed might mistake for the The Rolling Stones’ logo, she’d recognize him for a captain of the guard. Maybe the Queen’s own Captain.
Hellfire and cotton candy. Trouble. T-R-O-U-B-L-E.
But, by the goddess, whattahottie! Despite her certainty that his presence in the club corridor boded ill for her, the force of her sudden hunger shook her.
Like lightning.
Thunder.
A desperate bolt out of the blue.
Instant connection to him on the paranormal plane, as if he’d wrapped her aura in gold chains and tugged her to him. But did that fast lane to heaven run one way or two?
A grim expression straightened the lines of what otherwise might have been a generous, sensuous mouth. A military buzz cut had weed-whacked hair the color of iron. And it didn’t stop there. Without doubt, metal fortified every single cell in the massive male’s body, pure titanium flowing in his veins. The stern planes and angles of a hard-edged, swoon-worthy face set grimly as cement. Though he lounged in the hallway like any Archie or Jughead waiting in line to discharge his rented beer in a urinal, he exuded authority, his carriage and bearing such that he made the others look like a pack of Twizzlers. Oh. Yeah. More than a mere guardsman, she guessed. An enforcer.
Ruh-roh.

For male who is supposed to be such a demon of few words, you sure are blabbing all over the place lately, Bhyrne. May have to find something else for you to do.

Oh, someone who actually made Bunny a little fearful. Didn't think that could be done.

Never a dull moment with your characters!

As always, we had soooooooo much fun with Bunny!