Do You Dream of a Marine Ever After?

You know, it’s funny, when I was growing up—the accidental baby book was this huge thing in nearly ever romance I read and then along came ‘safe sex’ and ‘awareness’ and the accidental baby trope got a stern lesson in prophylactic action. Condoms are pretty much expected in most contemporaries these days—even if a woman is on birth control.

In a paranormal, you have wiggle room. Cause let’s face it, the chances of a vampire getting a woman pregnant are low depending on the vampire series. But I digress….

The accidental baby does still happen, whether you use a condom, whether you use any form of birth control, because none are 100% full proof. None.  One of the first romance novels I ever read was called Escape to Desire by Penny Jordan. I remember so much about this book, the hero’s name, the mad escape through the jungle, the guerillas (we would call them insurgents today) chasing the couple, and the night of stress-induced passion—and the really ugly spider bite that nearly killed the heroine.

I also remember she got pregnant and when she meets the hero again later, he doesn’t realize it's his kid right off (yeah, because math wasn’t his strong suit—but again I digress). I loved this book, loved it. I love the accidental baby trope probably because I’ve known so many women who found themselves in that position, they’re pregnant, not in a long-term relationship (or even some who are) and they have to make choices for them. Choices for their baby. And these are resilient women who take ownership of their lives and their choices, who do the best they can and they don’t always get a happily ever after with the guy.

As most of my readers know, I launched the Always a Marine series within Decadent’s 1Night Stand series. Although Marine Ever After isn't part of the 1Night Stand series itself, since it's not a planned hook up, it does have a one-night stand theme, the one-night stand being that evening where you abandon reason, embrace passion, and live for that moment. It’s okay to do this because for the most part, the next day you’ll go back to your life and everything will be normal—but what if it wasn’t?  That’s why, when I sat down to write this, I knew what would begin as an unplanned one-night stand would take me on a very romantic journey and boy did it ever.

A lot of readers will ask me what is my favorite Marine book and I always say that they are all my favorites. This is true, but Marine Ever After is special to me. Special in a way that’s hard to define—I think because it’s so romantic in places and yet so utterly real in others. It’s easy to get captivated by the fantasy, and reality has a way of intruding, but in Marine Ever After—fantasy and reality waltzed for me. 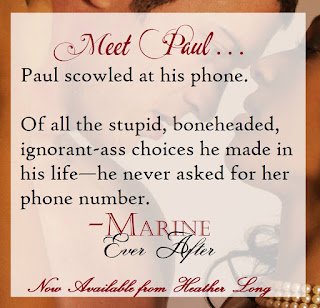 Paul Torres is a Master Sergeant. He’s smart, he’s charming, and he’s extremely witty.  He’s got a limited leave, but the man comes all the way to Texas to go to a buddy’s wedding. It’s the right thing to do, it’s about fraternity of spirit and friendship. And he’s also a man who when he sets his sights on something, oh my—he knows how to get it. 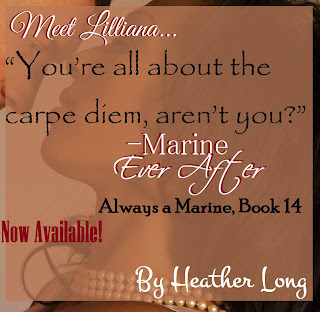 Lillianna Hansen is a nurse, Army brat and resourceful in her own right. She’s very dedicated to her job, but she’s also a good friend. As it turns out, she’s also one of my first heroine’s in the series: Rebecca Ranier’s former college roommate. They spent four years at the same school and they developed a friendship that lasted. It was important for me to show this connection, because she sees all of our guys through a different filter. Fierce and protective, she’s also smart and sassy.  Her chemistry with Paul from the first moment was wildly organic, but she’s not delicate or shy—and when push comes to shove, she really turns into this remarkably grounded woman who knows what she wants.

Not Conducive to Romance

One of the hardest parts of the service for those who serve and those who love them is separation, and a lack of control over day-to-day life choices. If the average civilian is in love with a girl on the other side of the country, he has options. He can move to her, change his life around, easy peasy (yes I know that’s a generalization). But if you’re in the armed forces and you’re deployed or on assignment, you go where you’re sent and it doesn’t matter what else is happening, your time isn’t your own.

That’s not conducive to romance, but trust me when I say Paul—he’s the guy you want in your corner. This is a romance with challenges, separation, choices, and a hero and heroine determined to do right by themselves and each other.

I fell in love with Paul and Lillianna.

Blurb: Marine Paul Torres is used to women who enjoy the pleasure of the moment and whom he can bed with a wink and a smile. But with so many of his friends settling down, he’s turned on by the allure of finding the right partner as well. Even more so when he meets Lillianna Hansen while attending a wedding.

After a passionate night, Paul wakes to find her gone and though he wants more than a one-night stand with the alluring Lily, his limited leave is up and he’s forced to return to active duty.

All Lillianna thought she wanted was a good time. But Paul’s attention—even from thousands miles away—is hard to resist, and while she tells herself repeatedly she doesn’t want a relationship with a Marine, she can’t deny the consequences of their passionate night.

When she finds out she’s pregnant, she’s forced to reach out to Paul. But is she ready to let the father of her child be her Marine Ever After….

Excerpt:
Sadly, the evening wedding meant the sun was already sinking as they exited, and the shadows lessened the chance he could tell what color her eyes were.
Photographs would be next and then a drive to the reception at Mike’s Place. If he played his cards right, they’d be in the same limo. But we have to dance…. A smile curved his mouth. He would have plenty of opportunity to stare at her eyes and determine their color then.
“Paul Torres,” he murmured.
“I’m sorry, what?” She glanced at him, a distracted smile softening her expression. It hit him like a fist to the gut. He needed to revise his earlier opinion—gorgeous didn’t do her justice.
“I’m Paul Torres, you must be Lillianna.” The only bridesmaid who’d missed the big rehearsal dinner. Not that I can complain…. He almost missed it, too. His flight landed an hour beforehand and only some skillful driving with Damon managed to get them both there in time to be in place before the bridesmaids did their obligatory walk.
“Yes, sorry. I can’t get over how happy she looks.” She let go of his arm and offered her gloved hand to shake. “And I’m Lillianna Hansen.” The urge to kiss it was a little too romance-novel for him, so he shook it then held onto it.
“The captain looks pretty happy, too. I think he got the better end of the bargain.” Paul chuckled. Every man from his unit seemed to be settling down in civilian life, marrying or pairing off. He’d served with most of the men in the groom’s party and earned his invitation when the wedding coincided with his leave. Unfortunately, one of Luke’s best friends—Brody—hadn’t been able to make it. The lieutenant remained on active duty in Afghanistan, but promised to visit the happy couple on his next trip through Dallas—probably to see his girl, the artist, as much as to see Luke.
“I hope so. There’s a tiny part of me that doesn’t like him.” Her announcement surprised him, but the photographer summoned them to join the bride and groom so he swallowed the question.
Five hundred photographs later, the dismissed wedding party made their way to the small fleet of waiting limousines. Jazz and her husbands loaded into one, the freshly marrieds got their own, James and Lauren claimed the third. Paul drifted back a little, and fortunately Lillianna waited for him as Damon and A.J. helped their bridesmaids into a limo and joined James and Lauren.
Score. We get the last one to ourselves.
“Everything all right?” She eyed him expectantly.
“Fine, I just wanted to check a button.” Lame, Paul. Lame. But it was the first excuse to pop into his head. He motioned for the limo and she shook her head and led the way. Beating her to the door, he opened it, handing her inside before slipping off his cover and joining her.
She sat opposite him in the wide area of the stretch, and on the far side. He considered swapping seats, but he liked looking at her better—even if only in the illumination of passing headlights. “I hope you’re ready for a big party.”
“Me, too.” Lillianna didn’t sound ready. He raised his eyebrows and she moistened her lips.
Damn. Mind out of the gutter. He gave his body the order, but too late to prevent the shock of reaction running riot through his system. If he hadn’t already been curious about her before, he definitely was then. Out. Of. The. Gutter.

Sounds fascinating. I've read a few books with the baby trope thing - and liked them mostly unless the time lag is too long. With the armed forces, you expect it, but if a woman has a child and then doesn't say anything for maybe 18 years - I get a bit annoyed with her!

Oh yeah, 18 years? That's more than a bit much unless either she thought he was dead or she had a very, very very compelling reason to keep the secret.