Time Travel and Writing It 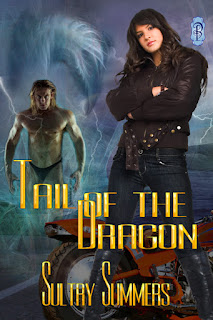 Science Fiction has always been one of my favorite genres, mix well with a good dose of Romance and what could be a more exciting read? I am sure many readers could agree with that statement but I’m just as sure many would say historical, contemporary and on to every genre written. Actually, I don’t limit myself either, I really enjoy them all. But time travel has a fascination for me. Forward or backward, it doesn’t matter, the way you get there is varied, a time machine, a time-slip, a different time-line an unwary person who gets caught…?  In the case of Garnith, changeling dragon/ knight, my main character in Tail of the Dragon, he’s cursed by an evil wizard a century earlier and sent to the future via a freakish lightning storm.

The idea for Tail of the Dragon came about while riding a road in North Carolina known as Tail of the Dragon to many of the motorcycle enthusiasts around the southeastern United States and its legend is spreading. This eleven mile stretch of route 129 crosses from North Carolina into Tennessee is a twisting turning tangle of switch back curves. Many ride it with stomach churning success, unfortunately some don’t, and several bikers have been killed attempting it. Whether they became over-confident or ran into a semi-truck who accidently made a turn onto a road most big truckers avoid isn’t the issue. The sad fact of their passing is. Both states regularly patrol the road and try to keep the riders and drivers as safe as possible. The route leading up to the Tail of the Dragon on one side goes by Fontana Dam and as I sat on the back of my husband’s motorcycle, the thought of a dragon swooping down for a cool drink of water came to mind and the story began there…

BLURB:
Danielle, riding her Ducati sport bike is ready to challenge a twisting, turning road known as Tail of the Dragon. Forced to stop because of a violent unpredicted storm she parks near the dam where the eleven mile stretch of road begins. But another challenge bursts from the weird, purple lightning storm in the form of a changeling dragon/knight.
Garnith, a changeling/dragon is locked in battle with an evil wizard while in his dragon form. Cursed by the evil warlock and sent unto another time and place as his flaming breath engulfs the wizard, Garnith emerges in the twenty-first century over Fontana dam in North Carolina. Swooping down to drink from the fresh water of the dam he accidently touches a power-line, and, injured begins to change. He manages to land on the overlook where Danielle has taken refuge. Garnith sloughs off his backpack before passing out.
Danielle is terrified but entranced with the creature changing before her eyes into a handsome, incredibly built, naked man. Drawn to the obviously injured man she opens his pack to find clothes, among other things.
Garnith wakes to see Danielle, dressed like a warrior in her colorful riding leathers, going though his pack. He catches the shirt she tosses to him while he enjoys the strange way Danielle is dressed. Where and when is this strange place the wizard has sent him?
Danielle and Garnith find chance has little to do with their meeting. Destiny has played a hand and soon both find the evil wizard has found his way into the future, in another life, to exact revenge on Garnith. The wizard discovers Garnith’s attraction to Danielle and will use her to his ends. Unless Garnith can stop him.

EXCERPT:
Garnith saw fright and distrust building in Danielle’s entrancing blue eyes. He’d seen that look before in the stares of those who witnessed him change, and he hated it, especially in the face of a beautiful maid. He’d never harm her, though she had seen him in his dragon form, and it could be a problem.
His gaze narrowed, contemplating her and the strange clothing she wore. She dressed in leather, like a warrior, but he saw no sword or other weapon. Her garments hugged every part of her body revealing far too much of the beautiful woman beneath, if she showed it, he would appreciate it. A slight smile tugged at the corners of his mouth. Tall compared to the females in the time he came from, still she wouldn’t meet him on eye level. Her strength impressed him. Unassisted, she’d pulled his sword from the pack while it was tangled and caught with a heavy piece of his armor. His gaze travel over her and settled on her boots, admiring the craftsmanship.
When she swung her leg over the seat of the thing she rode, he realized she was attempting to escape him. In a quick movement, he lunged for her instead of his sword and succeeded in reaching her.
“Where do you go, maid? I’ll not harm you. I need yer help.”
Garnith kept his voice even to calm the girl, but when Danielle stiffened in his arms, he knew she’d panicked. His huge arms wrapped around her petite waist and pulled her from her bike. Despite the surge of liquid heat the contact with her body sent rushing through his veins, he felt her terror, too. Using the heavy boots she wore to her best advantage, she fought like a wild creature kicking whatever body part her foot came in contact with. She’d slipped on her riding gloves before he grabbed her, and they were made from a material far sturdier than leather. Danielle balled her fists and used them as punishing weapons striking his jaw with a well-placed punch. He turned her loose, amazed at her strength and ability as a fighter.
She tried to gain her feet, but quickly, he again wrapped her in his grasp. This time she lay on her back with him atop her. Garnith watched Danielle draw a great breath to scream but covered her lips with his own to silence her, praying no one would happen by. He held her down until she quieted, subdued by the tussle and his embrace, then drew away to look at her face.
“Calm thyself, Danielle, I mean thee no harm.”

What a fantastic way for an idea for a story to come to you!! I've only been on the back of a bike once, and I didn't have the helmet on tight enough (compulsory to wear a helmet in the UK). I spent the whole ride petrified it would fly off!!

Great blog! I love bikes and a coworker has done this route. Congrats on your release!