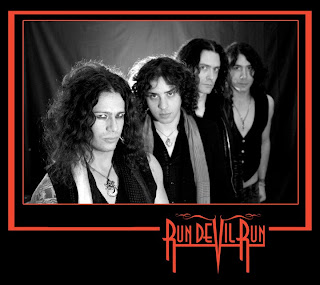 Decadent Publishing announces the release of a Paranormal-romance fiction anthology rooted in rock ‘n roll and ripped straight off the Sunset Strip.

Run Devil Run, an L.A.-based rock band well known locally for their dynamic live performances, diverse musical talent, and humorous video antics has lent their faces, titles and lyrics as inspiration for a five-book series with the publisher. The stories are penned by popular and award-nominated authors Rachel Carrington, Mari Freeman, Susan DiPlacido, Valerie Mann and Becca Dale, and will be released first in ebook format, then later in print.

“I’ve seen RDR play live several times and they are impressive. When this idea came to me, they were a natural fit. Paranormal romance lends itself easily to the Rock vibe,” says Heather Bennett, Co-owner of Decadent Publishing. “Customers who buy the series off our site will be treated to a free download of the coordinating song so they get the whole multi-media experience.”

Mari Freeman writes,” Music has always influenced my writing, but creating a story, characters and an entire world based on the lyrics of a song has been one of the most unique experiences. The collaboration between Decadent Publishing and Run Devil Run has found a creative way to take that musical influence and share it with readers. Read the book, get the song that inspired it. That rocks!”

Remarks Jackie Joyride of Run Devil Run, ”The fact that our music could inspire authors of this caliber to bring characters to life, I mean, it’s a thrill for us. It’s been great working with Decadent Publishing and to see these stories come together around our music…it’s an ego boost for sure!” 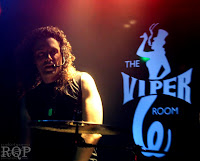 What a fabulous idea! Will have to grab this one!

I'll link it back here.

What a fantastic idea! I love the multi-dimensional aspects of this. And who doesn't love a good jam band? :D

I am so excited about this one. Can't wait to meet the guys in LA. Rock and Romance - perfect combo.

OMG! Are we gonna meet them during the week of RT? Becca, you're so right! Rock and romance are a natural fit...

A rock band and a paranormal anthology, a perfect match. Decadent Pub is on fire!

I loved this idea the minute Heather told me about it. I love Run Devil Run as well. Both the books and the band ROCK!!!