They weren’t twins, they weren’t triplets, but three of eight of them were born on December 31st.


I’m talking about my mother’s family. My mom Marie, her eldest sister Louise and eldest brother Alex were all born on New Year’s Eve Day; Louise, the eldest of the eight and the oldest girl, in 1908 – Alexander the oldest boy, in 1910, and my mom who came along much later in 1921.

The eldest two were born in a small town in Russia, Saratov, not far from Kiev, along the Volga River. After the dark times of the fall of the Russian aristocracy, Germans were invited to settle in Russia to help rebuild and farm. In exchange, the immigrants were allowed to keep their language, German heritage and traditions. These people became known as German-Russians. My mother’s parents were such settlers.

When things became more desperate in Europe, the Sterkel family set out for America. They passed through Philadelphia in 1911 – my grandparents, their two children and my grandfather’s brother, Konrad – he was 12 at the time.

They settled along the shores of Lake Michigan in Wisconsin, where grandma – with help of grandpa of course! – cranked out another six children, the first Americans of the family. Along with Louise and Alex came the boys- Heinrich, Karl and Georg, and the girls – Frieda, Emma, and Marie (my mother.)

What possibly could the odds have been that three of eight children were born on December 31st – let alone the first two? Pretty amazing – especially for the early 20th century.

So, New Year’s Eve is a fairly significant day in my life – three birthdays in my mother’s family.

I didn’t know my aunt Louise well – she 13 years older than my mother and lived out of town, but my mom had great stories about her.

My uncle Alex was a stitch! I wish I could have spent his 100th birthday with him this year – but alas, he died this past July. I wanted to be sad – but he was given 99 and a half years, and at the end, he could still tell a joke, although he couldn’t hear one! 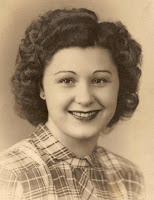 I wish the three of them HAPPY BIRTHDAY, and thank them all, especially my mom, for giving me the best foundation and examples on which to build myself as a person.

So, to all the birthday babies out there – HAPPY BIRTHDAY- and all you revelers - HAPPY NEW YEAR!

Wendy Burke blogs regularly for A Daily Dose of Decadence. She can be found on Facebook – Wendy Burke Author, at her blog site, Whatever Wendy! (www.whateverwendy.blogspot.com) and lurking around the Internet – usually giving Deanna Wadsworth (http://deannawadsworth.blogspot.com) a load of crap because she truly deserves it. When not playing with the people in her head, Wendy has a fine life with a chef husband (YES – no cooking!) and two furry feline kids and a full-time job that keeps her from writing fulltime in ‘beautiful’ Toledo, Ohio.

There always seems to be the way of it! In my family, the two big b-day months are December and July. We marry people born in Dec or July, give birth in Dec or July...

Dec b-days are difficult. Mine is pretty much ignored... *shrug.

Wendy, thank you for sharing such an interesting history of your mother's family. I'm always fascinated by stories from the old world - my father was born in 1925in Poland, and left in 1928 during the pogroms. What lives our ancestors have led!

Extraordinary! All birthdays are special days, but unusual birthdays are extra special. My son was born on a Leap Day - in a way, I kind of envy that.

Happy birthday to Louise, Alex and Marie - and happy New Year to all!

Remembering our family is a way to honor them as well. I enjoyed reading about your family and their unusual birthdays. The pictures are great, too.

We have three January birthdays in our family. My mom, who is no longer with us, was January 24, my youngest son's is Jan. 19 and my husband is Jan. 13. Happy Birthday to our winter babies.

Thank you for the wonderful comments - this post was a joy to write. I miss my mother daily!

Maureen, talk about bdays being ignored - my husband's is 12/17 and his brother's is 12/26...guess which boys got shafted big time on birthday presents!

Thanks again for the comments - they mean more to me than you know.

What a great blog!! I love family history, mine or other people's! Your mom was so cute, she had kind eyes and I can see the mischief in your Uncle Alex's face. Thanks for sharing your family with us!

Ya know, you look a lot like your mother. And of course, I'm wondering if her hair was thicker than yours or it was just her set....can't help myself ya know? :)

What was that I said about giving Deanna Wadsworth crap?! Ah, yah...she gives it right back! :)

Great post! I love hearing the history of families like this. Can you imagine living back then?
Thanks for sharing.