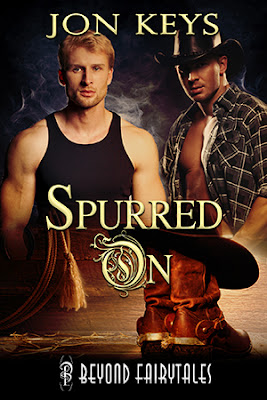 Today’s the release of a fun novella I wrote in response to Decadent Publishing’s Beyond Fairy Tales and I was lucky enough to get to write my version of Cinderella. I followed the feel of the original Grimm’s tale and had a great time.

Hopefully you will enjoy reading it as much as I did writing it.

Blurb:
Kegan’s new stepfather and stepbrothers are out to make his life miserable. Between the bullying and being overworked, he’s nearly at his wit’s end. When his mother leaves on an annual cattle buying trip for the ranch, he’s determined to suffer through. He must, if he expects to protect her like he promised his dying father.

When the family of a young man he’s been infatuated with holds a rodeo, Kegan can’t see a way he can compete. Not until a mystical medicine hat stallion walks into his life. It’s not long before they are the talk, and mystery, of the rodeo.

The only thing more daunting than keeping his identity secret is how Kegan is going to balance all this with his draw to the man of his dreams. Will Cole end up being his magical prince, or is Kegan going to find himself left in the dust?

Jon Keys’s earliest memories revolve around books. Either read to him or making up stories based on the illustrations, these were places his active mind occupied. As he got older the selection expanded beyond Mother Goose and Dr. Suess to the world of westerns, science fiction and fantasy. His world filled with dragon riders, mind speaking horses and comic book heroes in hot uniforms.
A voracious reader for half a century, Jon recently began creating his own creations of fiction. The first writing was his attempt at showing rural characters in a more sympathetic light. Now he has moved into some of the writing he lost himself in for so many years…fantasy. Jon has worked as a ranch hand, teacher, computer tech, roughneck, designer, retail clerk, welder, artist, and, yes, pool boy; with interests ranging from kayaking and hunting to drawing and cooking, he uses this range of life experiences to create written works that draw the reader in and wrap them in a good story.

Where to find Jon Keys: