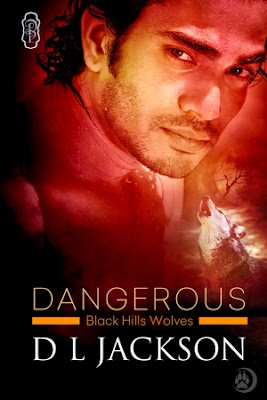 
As with any book I write, there are cuts and changes to the original contracted manuscript. While writing Dangerous, I went through several different endings and most of the cuts were not saved.  However, I did save you one.
Here we see Xio discovering her brother is back, and not in the way she would’ve liked.

“I see a bad moon a rising.....” Xio glanced down at the screen on her cell. Crap. Gee. What could the were bear want? Xio tossed the blanket off and hopped up, waddling over to her dresser to grab her clothing. She opened the call and put the phone to her ear “It’s my day off.”
“You need to come in.” Stern. Matter of fact. His tone all but pissed her off.
“I’m not working tonight.”
“I didn’t say I wanted you to work. You need to get here now, before I kill him.”
“Kill who? Marcus? Marcus is traveling on business.”
“No. Xander.”
Xio’s heart jumped. “My brother is at The Den?”
Grunt.
“I’ll be right there.” Holy shit! Xan’s in town.
The disconnect sound filled the receiver. Xio scrambled to dress. When? Why didn’t he come find her first, and more importantly, what did he do to piss off Gee? This couldn’t be good. Xio threw on her jeans, leaving the top button undone, pulled on a tee shirt, hoodie and yanked her combat boot laces tight, tying them as fast as she could go. She flew out the door and down the stairs, running for the bar down the street.

And one more treat, this one a little background into Xan and Xio’s genology, and is called A Cold, Hard Season.
“Okay,” the bear grunted. “This is touching, but I have a story to tell and work to get back to. You two can get all gooey about it later, on your time.”
Xio smiled at the grumpy bruin and wiped the tear away. “Then go on. I didn’t learn Chinese for nothing.”
“Mai Ling served meals to the men laying the rails. When the railroad came through the Badlands, she met your grandfather, Eli Snow.”
Xio sat up straight. “How did Mai Ling get to the Black Hills?”
“Who’s telling this story?”
“Fine. Go on.”
“Let me start from the beginning, but don’t interrupt me again or I’m done.”

Mai Ling watched over the rail as the ship drew closer to the San Francisco harbor. She rubbed her arms and pulled a way too thin silk wrap tighter around her shoulders. Her hair blew in the breeze, whipping against her cheeks. Around her, the excited chatter of at least fifty Chinese men and half a dozen women.
Bound for America. Land of the free. Home of the brave.
Except she was not so free nor brave. Instead of marrying the young emperor Tongzhi, as her father instructed, shaming her entire family, she’d run off and joined a group of workers headed across the ocean to lay rails from sea to sea.
One look at her feet and they’d almost barred her from boarding the ship.
“I have no use for a crippled Chinese girl,” the captain said in broken Mandarin.
No was unacceptable. She could not stay in China, not while a rebellion brewed around her and she would be forced to marry the man who stirred it up. Her father’s men already scoured the countryside searching for her. She’d had several close calls and her last chance at freedom sat on that boat to America.
“I have many skills.” She wasn’t just a crippled Chinese girl. Her father had raised her to be an empress and educated her in several languages, including English. What her deformed feet lacked, she made up for with intelligence and knowledge. “What of a Chinese girl who speaks English? I can serve as a translator between your workers and foremen.”
The captain narrowed his eyes, rubbing the scruff of his beard, studying her with more interest than before. “What else can you do?”
“I can cook meals the workers will like—traditional Chinese meals.” A lie. As promised bride to the future emperor, the skill had never been taught, nor desired, but she had to give him something. She could paint and sing, but again, not of any value to the captain bringing rail workers across the ocean. So a lie. Something so hard to tell, but he’d given her no other choice. She had to get on the ship before her father’s men found her. If caught, they’d execute her. “Please.”
“Fine. But you’ll be on the first train out West. We need a translator in the Dakota territories. Smaller crews and it should be easier for you to keep up.” He eyed her feet again. “Why do they break your women’s feet?”
“Because it’s beautiful.” And beastly. All her life she’d been taught to accept her place as a female in the royal household. Her feet had been broken and bound from the time she was nine, in the coldest part of winter, leaving her to shuffle into adulthood, instead of walk. But she guessed she was luckier than most, as she could still walk and practice Wing Chun, and need not be carried everywhere she went. For that, she would be grateful. For the trip across the ocean—even more so.
“Damn shame they do that to you. Downright ugly. Might have been able to make some money on your back otherwise. Get onboard.”
Tears filled her eyes. Home. A new start. She wiped the corner of her eye and smiled. Her future waited in America. She could feel it.

Dakota Territories, 1878
“You need to head north. We got ourselves a small problem in the Black Hills.”
“Small?” Eli Snow pushed the brim of his hat up, to stare at the weasel-faced man before him.
“The Calvary is there, but they haven’t been able to stop the local savages from harassing the rail workers. It’s slowed our efforts to almost a stop.”
“And you want me to do what about it?”
“Keep the workers from leaving and stop any incidents before they go too far.”
“How do you propose I do that?”
“You are friends with some of those indians, aren’t you? Grew up with a tribe outside of Minnekahta, where all them hot springs are located?”
“Yes, what’s that got to do with anything?”
“Go reason with them, and if they won’t be reasoned with, kill them.”
Right. How was he suppossed to reason with them when he agreed with them? And kill them? God, no. The white man had invaded sacred lands. The Black Hills belonged to the Lakota. The Elkhorn Railroad out of Nebraska hadn’t hired him to deal with the Sioux, only to protect the gold shipments brought in to pay the workers every week, and from train robbers, white men, not indians who could care less about the yellow metal. “I wasn’t hired to police the tribes.”
“Well, the job’s changed. Either you go to the Hills and deal with it, or you find yourself another employer willing to look the other way about your past.”
His past, one he’d rather forget. On the winning side of a shootout in Dodge, he’d survived to find the law on his ass. This job gave him an income and a place to hide, until things settled down and his trail went cold. He could go back to his pack. But not empty handed, with only excuses.
His Alpha charged him with a nearly impossible task. Keep the railroad from cutting through pack lands at all costs. With the boom going on, the task became harder with each day. So he’d hired on as an armed gunman and made close friends with the owners of the Elkhorn and Chicago & Northwestern railroads, using his relationship to influence them to skirt them around Los Lobos, but in doing so, he pushed the proposed rail beds deeper into Lakota territory.
The Lakota had protected the pack’s existance for centuries, but tensions had begun to rise because of his actions. Soon, friends would become enemies and the Black Hills Pack could not afford it.
That was not the kind of news you wanted to bring home to your Alpha. He shoved a hand in his hair and blew out a breath. If he reasoned with the “indians” they would want him to convince the railroad to push south a bit, into Wolf territory. He couldn’t do that, but he also couldn’t ask them to give up their lands. The government had already forced the tribes onto reservations where half the population starved during the harsh Dakota winters, and all the signs in nature already pointed toward another hard, cold season. He would not ask them to give up their hunting grounds. It would annihilate their population. “I’ll do what I can.”
What he could do was talk to the rail baron’s daughter. Julia would want a ring in exchange for her help and he had no intention of marrying her. He was a Wolf, and she was human. The two were forbidden to mix. The Pack secret must be kept at all costs.
“You’ll get the job done, or we’ll find someone else to handle the matter.”
“What’s for chow?” a deep voice asked.
Startled, Mai Ling lifted her gaze from the stew. She noticed a tall man with blond hair and fancy clothes leaning on the chuck wagon she’d brought out to where the men worked. Slung low across his hips was a holster, and in the hand-tooled leather rested an even more impressive revolver that would certainly send her to her backside if she tried to fire it. Big man. Big gun. “You work with crew?”
“No, ma’am. I’m passing through to Los Lobos.”
He stared at her from under the brim of a weathered cowboy hat. There had been enough heat in his eyes to make her turn red, even though there was ice on the ground and a wind that blew down from the north, making the day quite frigid.
She wanted to tell him the food was for the crew only, but something in the man’s expression said he wouldn’t take no for an answer. So she lied. “Dog.”
The gunslinger straightened his spine, scowling at the kettle hanging over the fire. He sniffed and curled his lip. “Dog?”
“You no like?”
“No, ma’am. I no like.”
“Why you no like?” She lifted the ladle to her mouth and took a bite of the beef stew, watching him cringe.
“I guess you could say I’m a bit of a mongrel, and eating that would make me feel like a cannibal.”
“It’s good. You try some.” Scooping up another portion, Mai Ling thrust the utensil out to Eli. “You no look like dog.”
“I suppose I don’t. I’m more wolf than dog.” He eyed the food she shoved under his nose. “There’s a lot of things I’d like to take a bite of, but that isn’t one of them, darlin’.” He pushed it away.
“Okay, you no like my stew.” Mai Ling shoved the spoon back in the pot. “What you like a bite of, then?”
“Ma’am, I’d love to take a bite of you.” He tipped his hat to her. “And that’s not dog.” With a wink, he turned and walked away, his spurs clanking with each step.
“You not so scary, Mr. Wolf.”

You can visit the author at her website here: http://www.authordljackson.com
at 3:00 AM