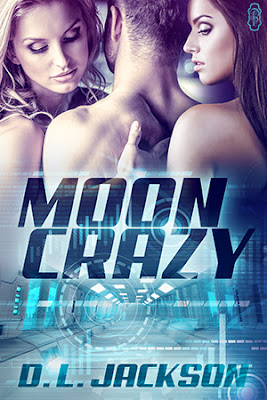 So, does Jace have swagger or is he moon crazy?
Of course there were some bits that ended up on the cutting room floor. After my second round of edits, I was going through the manuscript and came across this lovely section. It stopped me cold. I was like, “D L, what the heck were you thinking?” The comments attached to the cut, are actual comments to my editor. I thought you might like a peek at an authors editing process and the things that sometimes go through their heads during this stage of the production:

***Unedited section***
Quadraxians lived in domes beside the ocean and in the shallows. Every night the tides came up and anywhere from fifty to a hundred feet of water would cover the domes. During the full phase of the moons, the domes remained covered for several days, but since they were all  self-sustaining, it didn’t cause issues. Special processors extracted air from the oxygen rich sea water. Fish-like creatures provided the bulk the proteins  and since most  Quadraxians had indoor gardens within the  biospheres, they had variation in an otherwise carnivore diet. The dome-dwellers could go for years without coming out of their dwellings if necessary.

Many of the homes  bored into bedrock several feet below the ocean floor, giving them subterranean rooms. Tara’s had three levels. Her bedroom she kept above ground—his below. The sides of her home were wrapped with glass while the top consisted of a a concrete-like material, stronger and lighter than the Terran version and air and water tight when she shut the vents.

She had a room the level below hers, where she could free dive if she chose. Open to the sea, she need only jump in to go for a swim. Since Quads had gills, Tara improvised with a breathing apparatus if she needed to go out at high tide. She was never stranded or stuck, but rarely went out after dark. Nobody went ashore at night.
The domes served two purposes. The first was protection from the violent storms that plagued the planet. The round shapes resisted high winds. Hail bounced off them and water washed around them and over them like stones in a river. They were also anchored deep and created in a manner that they were air tight and submergable. This was the other reason the communities were built on the oceans and beaches.

The second was to avoid the other residents of the world, carnivores, who were strictly nocturnal because of their translucent skin and inability to tolerate the light from the radiant star. And they enjoyed humanoid flesh. Terran, Quad, they didn’t care. They also couldn’t swim. Since light was coming in, he could leave now, but decided to shower before going.

Author comment about section:  “Wow, little bit of exposition here. You want me to cut this? Nothing is really pivotal to the plot going forward, and I just realized I dumped all over this story here. It’s nice to have details in sci fi, but I don’t think it’s necessary, and damn...just damn. Smack me upside the head when I do this shit, will you? LOL”

Jace cracked an eye. Warm morning starlight streamed in through the glass behind him. The light illuminated Tara. She looked so innocent while asleep, and, truth be told, he could watch her for hours when she slept, but it wasn’t safe to let his guard down. Sometime during the night, he’d made the mistake of falling asleep in her bed. Good thing she hadn’t woke first.
She’d had a room built into her dome, for him, when he came over on occasion. After they’d had their fill, she wanted him to go to his room to sleep off the night until the ocean receded and he could leave without something eating him.
Her eyes fluttered open, and she stared at him. Beautiful aqua irises glowed in the light, their almond shape accentuated with a thick fringe of lashes. She studied him, her lips parted and swollen from her activities the night before. Her platinum hair glowed around her like a halo, taking his breath away. How he missed waking up next to her. He didn’t want to admit it, but he stilled loved her.
Unfortunate she didn’t feel the same way. It had been a long while since he’d spent the night in her bed, and, this time, only by mistake. A smiled tugged at the corner of her mouth.
Jace cocked a brow. Well, she looked friendly. Perhaps she wasn’t upset about him staying in her bed. No reason not to be social. “Good morning.”
The heel of her palm struck him in the breastbone, sending him reeling off the hovering platform, all flailing arms and legs, tangled in the sheet.
Jace hit the floor with a thud. “What the fuck.”
“What did we decide about you sleeping in my bed?”
“Damned harsh for a man who launched your rockets all night.”
“You have your own room.”

Have a great Fourth of July, weekend!