In Her (The Moon’s) Own Words 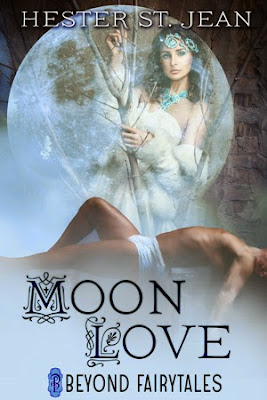 
It all started when my online writing friend Taryn Kincaid posted in a FB writers group, “Guys! IDK if any of you would be interested in this, but one of my publishers, Decadent Publishing, is launching a new line, Beyond Fairytales. Romances of all subgenres and heat levels from sensual to HOT, historicals, paranormals, contemporary, sci-fi. They're trying something a little different. You email the acquisitions editor and she will respond with a fairy tale title from the Grimm Bros. Your story will be based on the tale, but the connection may be as tenuous as you wish.”
I thought, Why not? I’d never written romance in any sub-genre, but it sounded like a fun challenge. And I’ve always loved fairy tales and revisions of fairy tales. As a little girl I marveled at Gretel’s ingenuity and bravery. When my own kids were young I sat with them to watch Kermit the Frog reporting on Rapunzel. My middle-school drama students put Goldilocks on trial for breaking and entering. Sure, I could do this!
I emailed the acquisitions editor and got my assignment: The Moon. My first response after reading it was Yikes, I can’t do this!
It’s too Grimm, too violent. The Moon is, in the Brothers’ version, exploited and dismembered. How could this possibly become a story of romance and happy ever after?
Then I began to think—but what is her side of the story. Though I was free to write with the loosest of connections to the original, it became important to me to do just the opposite. I wanted to stick to those Grimm “facts” just as closely as I could, but make it a story of The Moon’s agency: her courage, cleverness, survival. Her pleasure. Her discovery of love. I wanted to wrest it from the Brothers Grimm and make it the story of a sister’s celebration.
One of the interesting details of this particular Grimm story is that it not only accounts—as do many old stories—for a natural phenomenon, in this case the phases of the moon, but also for changes in culture and religion. From the primal moon of prehistory and the open and unbridled sexuality that is associated with the Greek and Roman pantheon, the story takes us to the prevalence of the Judeo-Christian tradition in the Brothers’ time. It is, finally, St. Peter who puts a stop to the revelry in the Underworld.
The character of Nicodemus, required by the Decadent Publishing guidelines to make an appearance in every Beyond Fairytales story, gave The Moon her chance. As he listened by her light, she told him the tale. Her tale, in her terms. Her words. A tale of The Moon.

After being stuck on earth when the door to the realm of the gods and goddesses slams shut, Luna, Moon Goddess, indulges in sexual frolicking with neither care nor consequences.  Until the night she is abducted, forced to use her erotic skills to line the pockets of four friends.
She meets a beautiful young Mereling—a mortal man like her captors, but alluringly different—and for the first time in her very long life begins to understand the difference between lust and love. Her newfound ability to love Merelings gives her the capacity to feel grief and awakens not only her own compassion, but that of her abductors.
How will she deal with the inevitable? She is immortal, and they must each die? What happens when she follows them to the Underworld? And how does she get to where she lives today, shining her light on all lovers?

This is Hester St. Jean’s first foray into romance and erotica. She has taught drama and creative writing in K-12 schools in Pennsylvania, Vermont, and Washington. Her writing celebrates women and women’s experiences. She enjoys reading and gardening by day, contemplating the moon and stars by night.