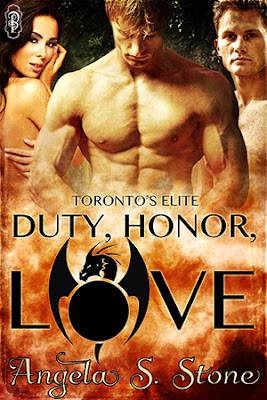 Can I let you in on a secret? I suck at blogging. Actually I suck at talking about my books in general, but here we are, celebrating the cover release of Duty, Honor, Love, and the upcoming June 30th release date!  I’m sitting here two days before my blog post is supposed to go up (and giving our poor blog Maven a heart attack I’m sure) typing this post out.
Duty, Honor, Love is the first book in what was supposed to be a three book series titled Toronto’s Elite. It’s now turned into a four book series, and I can see even more on the horizon.  My bunnies just won’t stop talking to me!
This book features Jaden Black, a power, but young telepath and her partner in Toronto police Special Investigation’s Unit Cameron Olsen. Along with the help of the mysterious Paul Butler, Jaden’s best friend and fellow telepath, they track down a missing child, shut down a child pornographer, have steamy sex, expose a corrupt cop and narrowly avoid a crazed killer. This book is full of twists, turns, dragons, and misdirects that will have you guessing to the very end who the real bad guy is!
I love this book, mostly because it’s very Canadian. From Toonies (gave my poor editors headaches over them.) to Nova Scotia phrases like “Put the TV on” and more the book is full of references to life in Toronto (even the legendary traffic!) and Canada in general.  It’s also full of “what if’s” Like what if you met someone who could read every facet of your mind, from the thoughts to the feelings to the random idea? What if someone was evil enough to kill to gain these powers. What if we lived in a world where Dragons, and ghosts, and a whole host of other things are real—just no one has told us about them yet!
Okay enough teasing here is the Exclusive excerpt you will not see anywhere else:

Excerpt:
Chris stood and stretched his arms wide at twelve-thirty, giving an exaggerated yawn. “What do you say we go grab some lunch? I’m starving.”
“I think that’s a great idea,” Cameron agreed. “Jaden?”
She nodded.
“I don’t know. We have an awful lot of work.” Leann glanced at the table of half-catalogued pictures.
“Come on, Lee. We’ve been at this since eight. I think we need a break.” Meincke stretched his legs.
“Agreed,” Logan added. “It will still be here when you get back, Lee.”
She hesitated, unsure, but three men giving her puppy-dog eyes made her cave. “Fine, but make sure one of the CSU techs comes here to watch the evidence while we’re gone.”
One of the techs, who’d already had lunch, volunteered, and Cam followed the group out of the building and down the street to a popular steak place.
They got seated quickly, and the waitress came to take drink orders.
“Coke,” Jaden told Cam.
The others ordered. “Two cokes,” he said, indicating himself and his partner.
The girl left to get their drinks.
“Do you ever say anything?” Leann asked Jaden. “I don’t think I’ve heard you say a word since I’ve met you.”
Jaden shrugged and gave him a quick but meaningful glance.
“She doesn’t like to talk around new people.” He brushed off the question.
Leann raised an eyebrow. “No offense, but you’re one of youngest cops and the youngest detective I’ve ever met. How the heck did you make detective if you don’t talk around new people?”
Jaden pressed her lips together in a tight line “Help.”
“Look, Leann, we’ve got a ninety-eight percent solve rate on our cases,” Cameron pointed out. “Jaden is a great investigator. She went into the academy right out of school and made her bones early on the serial rape case over in the brewery district. Jaden pretty much single-handedly took down the suspect by working her ass off. She doesn’t talk because….” He pretended to hesitate. Everything he’d said had been the truth so far. Time to add in a tiny lie, so the whole truth didn’t get out. “She stutters around new people. It took her three months before she would talk to me instead of through Ruth.”
“Oh I….” Leann blanched. “I’m sorry. I didn’t mean to pry.”
Jaden replied with a shrug as if to say it was okay.
Logan asked Chris about Noel, and the conversation switched that way, avoiding the awkward silence. The rest of lunch flew by, and, less than an hour later, they found themselves walking toward the office.
They were almost to the main doors when two men in matching dark-blue suits approached the group.
“Matthew Meincke?” one said, staring hard at the four men in the group.
“Yes?” He stepped forward.
They both flashed their badges at him. “Keep your hands where we can see them,” the taller one instructed. One approached him, and removed Meincke’s side arm, handing it to the other, who secured it. “Put your hands behind your back.”
He did.
“What am I being arrested for?” Meincke asked. He glanced around wildly for an escape route.
“It is my duty to inform you that you have the right to retain and instruct counsel without delay. You may call any lawyer you want. There is a 24-hour telephone service available, which provides a legal aid duty lawyer who can give you legal advice in private. This advice is given without charge, and the lawyer can explain the legal aid plan to you. If you wish to contact a legal aid duty lawyer, I can provide you with a telephone number. Do you understand?”
Meincke nodded, his jaw set, eye twitching.
“Do you want to call a lawyer?”
Meincke nodded again.
“You are not obliged to say anything, but anything you do say may be given in evidence.” He led Meincke toward the cruiser.
Leann blinked, slack jawed as they led him away. She turned toward the others. “What the hell just happened?”

Blurb:
Cameron Olsen believes in three things: the duty to his badge, the honor of being a police officer, and the love he has for his partner.
As a member of Toronto’s elite Special Investigations Unit, he has the privilege of working with Jaden Black, a power but naive telepath. As they hunt down a child rapist and killer and the case takes an unexpected turn, Cameron questions his badge, his profession, and who exactly his partner is, and what she’s been hiding from him.

Did I mention I’m giving away a $25 Amazon giftcard??:


Angela S. Stone is a twenty something Registered Nurse living in Ottawa, Canada. Angela finds inspiration in real life personal events for her books, often writing about issues she’s experience in her life. She is a proud Canadian and an even prouder girl from back east. She thoroughly enjoys writing novels featuring character that live in or are from the Maritimes. She’s recently met Mr. Right and when she’s not occupied with him she can be found hanging out at her local Bridgehead writing. She spends her free time advocating for minorities and persons with disabilities.

Gorgeous cover!! ;D
Congrats on the upcoming release, Angela! I enjoyed the excerpt.

Thank you Tina! I'm very excited to finally get the book released!

Congratulations on your upcoming release the excerpt was really good and I'm adding the book to my wish list.

Thank you ShirleyAnn I am super excited to share this book with everyone!!