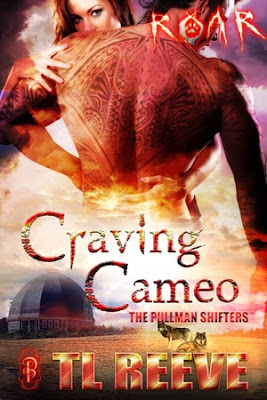 Good Morning everyone, I’m doing something a little different today. Usually when I do a character interview it’s only the main characters, but I have gotten so many requests from people wanting to know more about Cougar and Felicia along with Cricket, that I thought I would include the main characters of Craving Cameo in this short interview.

Since everyone has gathered with us, let’s begin.

Q: What was your first impression of Cameo when you met her?
Quade: Pure trouble wrapped in ribbons and dresses. I knew even when she was six she would be the death of me and she almost was. *A round of chuckles filled the space.* But, she was cute. Curious. Always gave me the biggest smile whenever she saw me and truth be told, she owned my heart from the moment she laid eyes on me.
Felicia: Her wit. *She looked to her friend and gave a small smile.* I remember walking into the auditorium to grab my dorm assignment and my freshman pack and there she stood giving some RA hell. The guy had at least six inches on her and about seventy pounds, but she didn’t care. By the time she walked away, she had her folder, key and a meal plan I’m not even sure she signed up for. *Felicia laughed.* The next time I saw her she was in class. We hit it off from there.
Cougar: My bar would never be the same again. *He sat back in his chair slightly and extended his legs. Folding his arms over his chest, he smirked.* I knew who she was the minute she stepped inside with Felicia. All I kept thinking to myself was; does Drake know about this? Do I have to worry about the Alpha trying to come in here and kick my ass? But, this girl can take care of herself. Don’t let her girly looks deceive you.
Cricket: *He gave a shy grin when he looked at Cameo.* I had to get to know her. I knew she was Drake’s babygirl, and I knew he would kick my ass if I touched her, but she is special, you know? *He sat forward in his chair and looked to Quade.* You know it, don’t you? She walks into the room and everyone stops to stare. It’s the craziest thing I’ve ever seen. To be able to call her my friend is the shit. I’m honored.
Cameo: You guys suck. Here you are talking about me and breaking down my tough girl rep. I should cut all of you.
But then the interview would be over. *Cameo curls her lip and growls.* Hey I’m just the interviewer. You’re not allowed to cut me.
Q: The bounty on your head Cameo, did you think it was a quick way for Quade to get in your pants?
Cameo: No. He let me leave. I figured it was Daddy’s way of bringing me home, because he didn’t like me being away from him. But, when we were attacked in the bar… *She let out a slow, shaky breath.* I knew it was real and we had to act fast.
Q: So you came up with being kidnapped by Xavier and Quade?
Cameo: Yep. Quade hated it—
Quade: Still do. I should paddle your ass later for even thinking of such a thing.
Cameo: *Rolls her eyes.* Anyway, I knew it would work. I just hadn’t planned for everything else.
Q: Speaking of everything else, how are you holding up after your father died?
Cameo: I have my good days and my bad days.
Quade: And when she’s having a bad day we’re all here for her.
Cougar: We’re family now. No way in hell we’d let her suffer.
Cricket: Besides Mari, Cameo is like our sister. We’re very protective of her. *He looked at me like the weight of the world rested on his shoulders.* Drake was a rare man, let alone, shifter. He did what he felt was right. Took care of his pack and instilled loyalty into his pack mates. His death not only left a hole in his daughter’s life, but all of ours too.
*A round of nods flowed around the circle we sat in.*
Q: So what’s next?
Cougar: I guess that depends on Felicia.
Felicia: There is so much to sort out. So many things I didn’t know about until now. Plus…I think someone is following me.
Cougar: What?
Felicia: I’m sure it’s nothing.
Cricket: My ass, nothing. If we learned anything with Cameo, you never can be too cautious.
Cameo: Why didn’t you tell me?
Felicia: *She shrugged.* You were busy. Besides, I talked to my father who’s going to look into it as well. I’m more than sure it’s nothing.
Cougar: I oughta whoop your ass—
Okay, okay, it’s time for a little this or that, ready? *A grumble of yes’s filled the room.* Excellent.
Q: Chocolate or Vanilla?
Cameo: Chocolate
Quade: Vanilla
Cricket: Neither I want some cookie dough.
Cougar: Vanilla
Felicia: Chocolate.
Q: Staying home or Going out?
Quade: Going out.
Cameo: Going out.
Felicia: I learned my lesson. Staying home.
Cougar: Going out.
Cricket: Going out.
Q: Morning or Night?
Cameo: Both.
Quade: Both.
Cricket: Night.
Cougar: Night.
Felicia: Morning.
One more….
Q: Your mate or A random hook up?
Cameo: My mate.
Quade: My mate.
Cricket: Older, random hook up.
Cougar: My mate.
Felicia: *A sob fell from her lips as she ran from the room. Cougar was hot on her tail.*
Well, that didn’t end like I thought it would. Thank you all for doing this with me.
Cricket: You’re welcome, TL. How about you let me take you for that ride I promised you and I’ll show you what being a bear is about? *He winks at me and I giggled just a bit.*
I’m way too old for you Cricket.
Cricket: Then you’re perfect.

Blurb:
The daughter of the Sentinels pack and MC Alpha, Cameo Cruz moved across country to escape her pack—and the wolf she can never have. Making a new life, she embraced her freedom and went to school. One partying night with her best friend shatters her bubble of safety, and she’s forced to do the one thing she swore she never would…ask for help.
Quade Rainwater lives for his pack and the life the Sentinels Alpha gave him when he took him in. He’d do anything for them, even cut himself off from the she-wolf he’s loved for as long as he’s known her. When all hell breaks loose and someone puts a bounty on his girl, Quade will cross the country to protect her. Unfortunately for him, he’s the last person she wants to see.
All he has to do is keep her safe from the bounty hunters, the locals, and himself….
Excerpt:

“Why? Why are you here?”
“Do you really think I want to be here?” he asked. “Do you think I find it fun leaving my home to drive clear across the fucking country to find you? Huh? I don’t want to be here anymore than you want me here, but your fucking father—” He snarled and began to pace. “He’s losing it where you’re concerned.”
“Well.” She gave a humorless chuckle, turning away from him. “You can tell him I’m perfectly fine.” She wouldn’t give her father or him the benefit of seeing her fear. She’d take care of the other problem on her own.
“Little girl, don’t start.” He laid his hands on her shoulders, and she shrugged them off. “Don’t you know you have a bounty on your head?”
“What?” She whirled around and stared up at him.
“The other night when you called Hui, Xavier also found out about a bounty on your head.” Indifference seemed to coat his unreadable expression and words. “There are more coming. They’ll be here by tonight. We need to leave. If I can get you to your dad—”
“No.”
“Cameo,” he snapped. “This is not a fucking game.”
“You’re right. It’s not a game. I will not forfeit my life for some bounty. I’m staying.” She wouldn’t add he could stay and watch over her.
“Well, you’ve got two choices, sweetheart. Come with me or wait to be picked up by the guys who are out for your bounty.” He didn’t blink. He didn’t get angry, nothing.
“My answer is still no.” Crossing her arms, she arched a brow, daring him to say something to the contrary. She played with fire, knowing full well what might happen if she pushed him too far. Quade was not a wolf used to hearing the word no. His nostrils flared. His body tightened.
“Damn it, Cameo,” he growled, while taking a step toward her. “Why are you being so damn obstinate?”
She blew him off and pushed past him, crossing the room to her small fridge. “I’m sorry if I seem obstinate to you, but this is my life we’re talking about.”
“Is this because I wouldn’t give you the time of day?” Typical wolf. Always thinking with their penis.
“Not hardly.”
“What in the hell do you want from me?”
Want from him? She didn’t want anything from him. She hadn’t even wanted to see him again.
In two strides, he closed the distance between them and dipped his head. “Is this what you want?” He nuzzled her neck and groaned. “Tell me,” he demanded. “Do you want me to drop to my knees and beg for forgiveness? To tell you I’ve wanted you since the moment you turned eighteen?” His lips were only inches from her ear. His warm breath brushed against the shell, causing her to shiver. “You ran away from me.”
“Ran away from you? I left home so I could get an education and be someone better than a thug.” She grimaced inwardly when he flinched and withdrew from her. Quade wasn’t a thug, neither was her father.
“So, I’m a thug now?” He shook his head while clenching his fists at his sides. “Are you saying when you were on pack lands you thought so low of me…of your father and our friends?”
“Now you’re twisting my words.”
“Am I? Didn’t you say you left home so you didn’t become one, meaning we, the members of your pack, are thugs?” He cocked a brow, daring her to say something else stupid. Insert foot in mouth, dummy.
“Look, I didn’t storm into your home and pick a fight with you. So…so why don’t you leave?” Brilliant! Way to go you.
A dark sinful chuckle passed his lips as he pulled her to him, engulfing her in his embrace. “You never did know when to shut up.”
His lips slammed down on hers in a brutal kiss. He tasted of danger and excitement. Of raw masculine power. Cameo’s wolf preened, desperate to rub all over him and submit to his dominance. He swiped his tongue across hers, and she became a puddle of goo. “Would you like to know where my mark will go when I mate you?”

Author Bio:
TL Reeve, a mulit-published author with Decadent Publishing, Cobblestone Press and Evernight Publishing, was born out of a love of family and a bond that became unbreakable. Living in the south, TL misses Los Angeles and will one day return to the beaches of Southern California to ride the waves at Huntington Beach. When not writing something hot and sexy, TL can be found curled up with a good book, or working on homework with a cute little pixie.