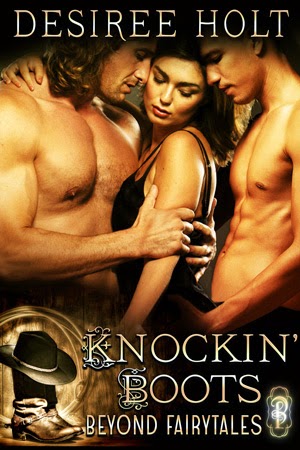 For those of you who read my books, you know I like to write about troubled heroes. For example, Blake Massie in Soul Dreams had survived a horrific fire with scars. In Knockin’ Boots, Clint Gorman is a tired veteran of the battles in Afghanistan and suffering from a from of PTSD. He estranged himself from the only members of his family remaining and he can’t seem to find peace no matter where he goes. On his huge motorcycle he’s riding the country looking for someplace he can find that peace of mind and people he can relate to.

But this is a fairy tale, right? Where people’s wishes can and do come true? So maybe the old man telling the story knew exactly what Clint wants and needs and magically led him in this direction, to a chance meeting at a boot store in the tiny Texas town of Whistling Creek. The out-of-the-blue invitation he receives from Dan Franklin and his wife, Kylie, might just be the answer to his prayers.

“I’d just as soon let the two of you take the lead. But I’m not shy about asking if something pops into my head.”
“I don’t know if Dan mentioned it, but I do have a secret wish.” Kylie looked at Dan, who nodded. “We would love to find someone to move in with us permanently. Of course, that would be asking an awful lot.”
“Yeah?” Clint tried not to show his surprise. He’d been in a lot of one-night ménages. Sometimes even two-night encounters. But a permanent one? Would that ever interest him? He gave the other man a questioning look. “And you’d be okay sharing your wife on a regular basis?”
Dan drained the last of his beer and set the empty on the little table beside the couch. “Hell, yes. I mean, I know there would be a lot of logistics and specifics to work out, but if we could find someone on our wavelength, someone we both wanted to include, that would be the ideal.”
“But that’s just a dream, you know?” Kylie leaned into her husband. “Today, let’s enjoy each other. I’m more than ready”
“Sounds good to me.” Yeah, he was more than damn ready, too.
He wondered if, when it was his turn, he could get Kylie to straddle him in this chair and ride him hard. At the thought, his poor cock, which was already in distress, about strangled itself trying to get free. He tugged on the worn denim of his jeans, trying to ease the pressure.
Kylie’s low, throaty laugh sizzled his nerve endings.
“Got a little problem there, Clint?”
“No, I’m good.” But, of course, he wasn’t. His cock wanted out right that moment.
“Maybe I can help you.” She set her bottle down beside Dan’s, hopped off his lap, and walked over to the recliner, reaching out her hand. “May I?”
He didn’t know exactly what she was asking permission for, but what the hell? He nodded, his eyes dropping to her cleavage and the tempting swell of her breasts.
She unfastened the button at the top of his jeans, slowly lowered the zipper, and reached inside. Her fingers eased his shaft through the fly of his boxer briefs and closed lightly over his flesh, stroking it a few times. At her touch, heat flashed through his entire body, and his cock flexed.
Holy shit! They didn’t waste much time on preliminaries or social niceties. Well, fine by him. He wasn’t much for conversation anyway.
“Mmm.” She ran her tongue over her plump lower lip in a teasing motion. “This man really has it, sweetie. Maybe you should show him what you’ve got, too.”
Dan stood up and, as if she’d asked him nothing more than to move a pillow, began stripping off his clothes. When his dick popped free, Clint was sure it rivaled his in length and breadth. The thought popped into his mind that if they both fucked her at once, they’d be filling every inch of her. He hoped she was up for it because the image made his mouth water.
His eyes widened in surprise, though, once Dan was naked, to see him pull his boots on again.
“Surprised? Yeah, we’ve got this little fetish. We like to fuck with our boots on.” The man nodded at the box Clint had placed next to his helmet beside the chair. “Good chance to break your new ones in.”
Clint smothered a smile. This gave a whole new meaning to the term knockin’ boots.
“Okay, but you have to tell me how it started. You can’t just throw it out there without explanation.”
They looked at each other, and Dan grinned.

I'm so happy to be here tday, having a hot time at the cabin in the woods.

Oh my cant wait to read this one !!!!! Thanks for writing such awesome books

Looking forward to reading this one, Desiree!
Awesome excerpt. :D