Getting to know the characters from Their Secretary 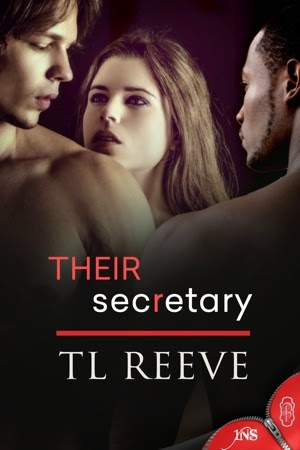 It is my pleasure to introduce to you, Piper, Tyce and Colton. They’ve agreed to sit down with me today and explain why they decided to take the leap and go out on a 1Night Stand date.

Good Morning, everyone! Why don’t you tell me a little about how you all met?

T: Well, see, it was a dark and dreary night and-C: Always with the wise cracks.
P: I think she means when you hired me. *Chuckles*

Well any answer would be great.

C: Tyce and I opened the office straight out of college. For a long time, we handled the whole load ourselves—
T: *Snickers* Load.
C: *Cuts his eyes at his lover* Anyway, when the company started growing, we knew we would need another person to help us out.
T: Piper was the second person who can in. *Smiles at their girl.* We knew she’d be the one.
C: She wore this polka-dot skirt and a white blouse—
T: With these pearls. For the first three weeks she wore them every day.
C: I think it was love at first sight for both of us.
P: *Blushes* Well, what they don’t tell you is that I was so nervous coming to work for them. I mean these guys made it on the Forbes list in no time. They have clients around the world, and I…I was just trying to find my way through this world.

Your story is interesting, Piper. I think it’s pretty admirable how you decided to be your own person. It had to be scary. What happened to make you choose to do so?

P: *Clears her throat* I couldn’t do it anymore. I couldn’t not be me. My mom was so strict. She had these schedules for everything. I swear if she could have put me on a routine for going to the bathroom, she would have. So, when I went away to college, it felt good to be free. To find myself. What I found out is that I didn’t like myself. So, I started over. I reinvented myself.
C: If she hadn’t, we would have never met her. I believe we were destined to meet. Like, kismet.
T: I agree. It felt like the stars aligned the minute she walked in our door. Everything seemed to calm down and we were at ease.

Awe. So, when you guys saw each other at the ball, what did you think?

C: Absolutely blown away. Piper’s hair was the biggest change. I kind of liked it. It added to the role play aspect of the night. Then the dress. Man. Madame Eve did something right with that amazing costume.
T: I’m just going to say it. She gave me a chubby. Not going to lie. My mouth watered. My hands itched to touch her. I couldn’t believe our Piper had, number one agreed to the date, and number two, made the Victorian Era look so good.
P: They looked amazing as always. I couldn’t believe Madame Eve used Dracula, but seeing the guys in there suits… *Giggles* We kept the costumes. We pull them out from time to time.

Kinky, you three. So, what’s next for you?

C: Normalcy. I think I want to just settle down and cultivate this relationship we’re starting. I think after everything that’s happened we deserve a little quality time.
T: I think we should take a vacation.
P: Someplace tropical with fruity drinks. When can we leave?
C: Well, as a matter of fact… *Pulls out the tickets* How about starting now?

Well, I guess we’ll leave these love birds to themselves. Find out how it all begins. Pick up your copy of Their Secretary, on February 18th! Until then, check out the blurb and excerpt from their book.

Blurb:
Piper Collins is out of love and out of time. After witnessing her bosses’ affection for one another, she resigns her position and decides to start over. But before embarking on her new life, she decides to give 1NS and Madam Eve a chance to show her what she could have had, if only she were braver.
Business partners, Colton Shaw and Tyce Stewart have been lovers for years. But something’s missing from their union. Their beautiful but shy secretary has been watching them day and night, as though she were a love struck puppy. However, their plan to bring her into their relationship backfires. Not only will she not join them, she runs away heartbroken.
With Madam Eve’s help, they want to prove once and for all she is their girl—the third to complete them. Can Colton and Tyce convince Piper of their love, or will they lose the girl of their dreams forever?

Excerpt: The horn honked in an annoying pattern, and she had to get going. She took a deep breath, let it out, and picked up her luggage. Stepping out of the apartment building, she apologized to the cabbie for making him wait and placed her stuff in the trunk. If she was committed to going on this date, she might as well make the most of it. Of course, she could open her laptop and cancel everything at any point before she went through security—or even after—but some part of her told her she needed to go through with the date. Who knows, you might find your Prince Charming. Or at least have a bit of fun.
Fun. A three-letter word she knew little about. Her existence consisted more of working and proving herself than any actual fun. Piper’s father and mother demanded perfection her whole life. They lived in the richest part of Manhattan, had drivers, more money than they knew what to do with, and had raised her to be a socialite, but she’d never fit their mold. She wasn’t perfect.
She needed to lose weight. Stand taller. Go to a better school. Get a better degree. Her mother’s words rang out in her mind. A proper lady should fit into her clothes as though they are a second skin. Her job, if she has one, must be in a respectable profession such as law, medicine, or perhaps finance, and her home always kept in pristine condition. Instead of following the path laid out for her, she’d used her time in college to plan her own future.
By her sophomore year, she’d given up reliance on her parents’ money, using scholarships and work-study to pay her tuition and expenses. She studied day and night, and, though she had no social life to speak of, she gained her independence. Piper took pride in the ability to provide for herself and to make her own decisions without worrying about what society would think.
But at the same time, her pride kept her from what she craved. If she wanted something meaningful from Colton and Tyce, she needed to swallow her insecurities and tell them exactly what she wanted…them. But her sense of self-preservation kept her from opening up. Memories of the day she witnessed their embrace filled her mind once more. In her fantasy, she placed herself between them. They turned, eyes filled with adoration, heat, and lust upon her.
She couldn’t make out their murmured words, but the pure emotion of what they said filled her with warmth. From her toes to the top of her head, she vibrated with such need she could scarcely hold herself still. Her panties damp from the intense throb of anticipation flowing through her, Piper shifted from foot to foot, trying to ease the ache. What held her back from asking Colton to pleasure her? What stopped her from placing Tyce’s hand between her thighs and showing him what she wanted? In her mind, they stood frozen in time, waiting for her to make the next move.
You can do this, Piper. Take the final leap and lay it out there for them.