When I told Shiloh that I was writing a bull riding story she got really excited. She grew up on a ranch and is a bona fide cowgirl. Myself, not so much. I grew up in ag country, but my dad was a hydroelectric mechanic. So when I turned the story in to her for a beta read, things got ugly fast. And I do mean ugly. I believe her exact words were, “You don’t know anything at all about bull riding, do you?”
Ouch! Lucky for me, Shiloh is somewhat of a PBR expert – she even dragged me to a bull riding event here at our local arena. Boy, did I ever feel out of place. Yes, we have county fairs here and yes, I’ve been bulls up close, but this event was completely not my sandals-and-socks wearing style. I found myself quickly overwhelmed by the noise in the arena, (it was held inside), the craziness of crowd, and the shocking willingness of the bull riders to rattle death’s doorknob for eight seconds of fame. Were they feeling lucky? Heck, I don’t know. I saw one guy hauled off in a stretcher, but still alive. Lucky means different things to different people I guess. 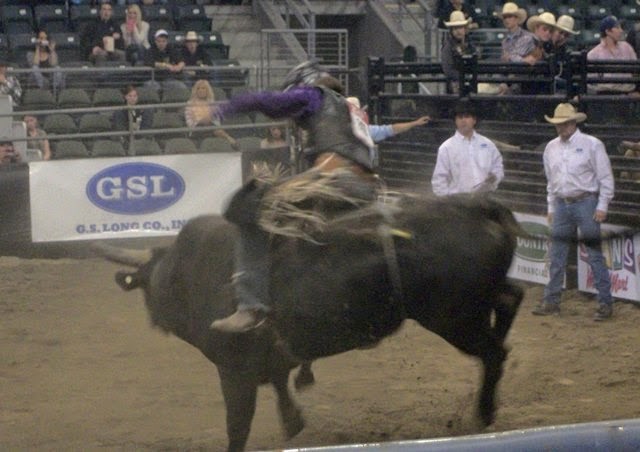 Turns out I’m a lot more squeamish than Shiloh!
After that first read-through, a collaboration was born. Shiloh keeps the bull shit from being bullshit, and I plot out the smexy. And the crazy clowns. I just can’t help it. I seem to need a little humor in everything I do.
Shiloh just sent me the corrected version of Book II. She has one more bull riding scene to re-write and I have to fix a weird passage or two, but it’s mostly done. By the way, get your MM smexy in Book I, because Book II is M/F and Book III will be a M/F/M ménage.

Blurb:
Professional bull rider Garrett Anderson lives for the next town, the next trophy and his next ride. When he rolls into Sheridan, Wyoming, the last thing he expected was to meet a cowboy like Cole—a man who corrals his heart and leaves him aching for a love he never realized he’d been missing.
Surrounded by hate, Cole Richards wasn’t prepared for Garrett’s passion or the longing their night together leaves him with. But when he’s shot, and stuck in his hospital bed, Cole watches every second of Garrett’s disastrous ride, and is heartbroken when the battered and bruised bull rider leaves town.
Attacked again and knee-deep in trouble, Cole wants only Garett at his side. But can his bull rider trade fame and fortune for a lifetime with his one perfect ride?

Excerpt:
Garrett eased his big frame out from behind the stationary table. “Well, I’m game. I’ve been sittin’ on too many tame ones lately. Could use a little excitement.” His sizzling look said he wasn’t talking about bulls. “You gotta head back to work?” He stretched, flexing his chest as he raised his arms and clasped his hands over head.
Cole visually traced the outline of every curved, solid muscle as it moved under his shirt, wondering how they’d feel if he rubbed against them. He hoped he’d find out before this rodeo ended. He shook his head. “Not till after dinner. I have the night shift tonight.”
“Well, don’t that suck. First night here and all.” Garrett put his arms down and tossed his empty plate in the trailer’s tiny sink.
Cole stood, hung his hat on a peg, and ran his fingers through his hair. It stood up in little sweat curls. Time for a shower. “It does. But I gotta spell the boss’s son. He just got back from Hawaii.”
“Hmm.” Garrett managed to prowl across the distance between the sink and the table, though it was only a couple of feet. When he reached Cole, he ran a finger down the placard of his snap-front plaid shirt. “I was in Hawaii, too. Didn’t see you there.”
“I didn’t go. I take care of Spitfire stateside. The boss’s son takes care of him if they fly.” His gaze snagged on the man’s Adam’s apple before lifting higher. The smooth burnt caramel color of his skin was shiny with sweat. It was hot in the trailer. He really ought to open a window. Later. Right after he licked him clean.
“And who….” Garrett moved his hand lower and lower. It rode the length of his shirt before running over his belt buckle. He didn’t pause but slid the hot caress right on down. “Takes care of you?”
“Nobody.” His whisper came out raw, filled with more need than he’d intended to show. But hell, it had been a good nine months since…. No. He didn’t want to think about Cash right now. Not with a man as hot as Garrett Anderson reaching below the beltline.
“Now that’s a damn shame.”
The heat of Garrett’s breath fanned over his lips as his fingers reached the bulge in his pants, traced along it, and palmed the entire hardening length.
He groaned as Garrett cupped him firmly. His hips automatically pressed forward, urging his cock into Garrett’s palm. He wanted to come right then and there. “Jesus.”
“No, sir. Name’s Garrett. Garrett Anderson, and I don’t mean for you to forget it.”
He whined when Garrett’s mouth closed over his. God he wanted to see this man naked. Right here, right now, in his shabby old trailer. This bull rider would be the best thing he’d ever had in here. He placed a hand on the back of Garrett’s head and crushed their mouths together, hungry for the man’s sweet cornbread and barbecue sauce taste. Most of the men he’d kissed tasted like dust and smelled like cows. But Garrett’s mouth was honeyed heaven.
Garrett grasped his ass roughly, slid his hands down the cleft, and cupped just behind his balls. He snugged their bodies together and lifted Cole tight against him. Their cocks abraded, sparking heat inside jeans threatening to melt the fabric. He broke the kiss long enough to ask, “Got a bed?”

Eva Bio:
Eva Lefoy writes and reads all kinds of romance, and is a certified Trekkie. She’s also terribly addicted to chocolate, tea, and hiking. One of these days, she’ll figure out the meaning of life, quit her job, and go travel the galaxy. Until then, she’s writing down all her dirty thoughts for the sake of future explorers.

Shiloh Bio:
Shiloh Saddler likes to do research for her steamy romances first hand. She has invented a time machine and travels back to the 19th century on a regular basis. There are experimental settings on her time machine which could propel her into the future and even other worlds. She believes love and a good book makes anything possible.